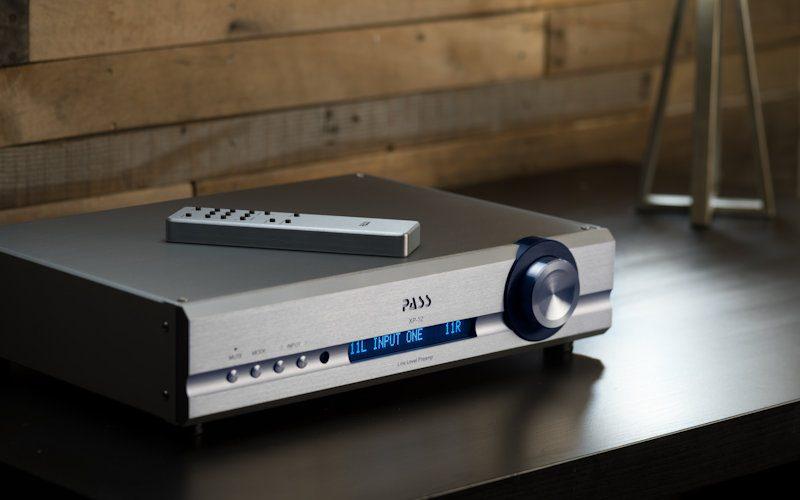 Greg Handy says the Pass Labs XP-12 left him with a potent reminder of how vital a stereo preamplifier is to a high-performance music playback system. 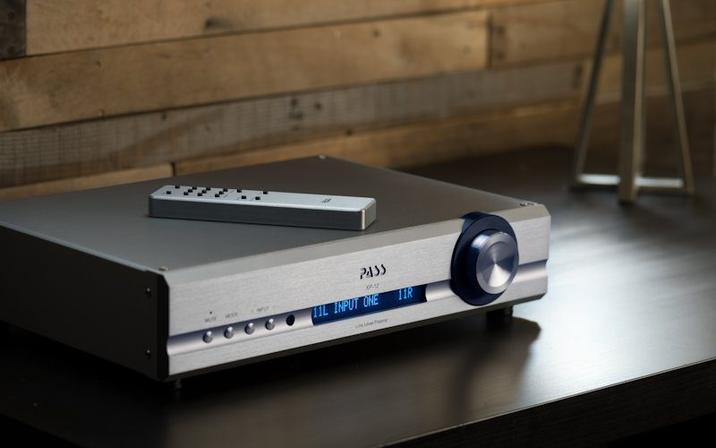 The XP-12 and XP-22 were first introduced in 2017 as replacements for the XP-10 and XP-20 models, even though these older models remained in the product line until recently. In this review, we'll be taking a deep dive into the XP-12, a $5,800 solid-state line preamp that provides upgrades over the XP-10 in the form of a new power supply, improved circuit designs, noise isolation, and features borrowed from the company's flagship XS Preamplifier ($38,000).

The XP-12 provides source switching for up to five components. The first two inputs are balanced, while the other three are single-ended. Home theater pass-through lives on the fifth input, which allows the XP-12 to integrate with your surround processor.

Unlike the two step-up XP models, the XP-22 and XP-30, the XP-12 is a single-chassis design with the gain stage and power supply residing within a single unit. The new toroidal power supply used in the XP-12 benefits from enhanced shielding using both an electrostatic and a Mu metal shield in conjunction with epoxy filled vacuum impregnation that provides electrical and mechanical isolation. New and more involved power supply circuitry provides lower noise and further filtering over previous models.

Additionally, the XP-12 benefits from a trickling down of Pass Labs' sophisticated micro-controlled volume system, borrowed from the extreme top-of-the-line XS preamplifier. This design offers one hundred steps of attenuation in 1 dB increments. The XP-12 also features a rugged yet sophisticated appearance. The power switch is located on the back panel, just above the AC power cable connection point, and is the only power switch offered. The intent is to keep the XP-12 powered on, warmed up, and ready for use at all times since it draws little power.

The front panel consists of various selectors and a light blue fluorescent display. In addition to Mode and Mute buttons, the front panel also includes two buttons for cycling through inputs. Home Theater Pass-Thru (Unity), is accessed only from the remote control, though, which appears to be milled from a solid block of aluminum.

The Hookup
I did all my evaluation of the XP-12 in my dedicated home theater. With the preamplifier positioned dead-center between a pair of Pass Labs XA-60.8 monoblock amplifiers, the preamp appeared diminutive by comparison, despite its rather standard 17-inch width, 12.5-inch depth, and four-inch height. Despite the visual disparity, this location provided plenty of wiggle room for secure attachment of Wireworld Eclipse 8 balanced interconnects and speaker cables.

I connected NAD's M17 V2 Surround Sound Preamp Processor to input five of the XP-12 to take advantage of the home theater bypass function. My primary source for this review was an Oppo BDP-105D Blu-ray Disc player and streamer. With the Oppo's HDMI output already connected to the processor, I ran the balanced analog outputs of the player directly to the XP-12. In this configuration, the Oppo would use both its digital HDMI and analog outputs, providing an easy comparison of both preamplifiers.

The Focal Kanta No. 2 speakers already connected to the monoblocks stayed in place for the duration of this review.


After a short break-in period, and with the Oppo direct input selected, I started with the Ramsey Lewis track "People Make the World Go 'Round" from the album GRP 30: The Digital Master Company 30th Anniversary. The bass was prodigious and controlled, yet authoritative. The piano imaged well, floating within my listening space with just the right amount of forwardness. Cymbals caught the air then naturally decayed within the broad and deep soundstage. Switching to the NAD by choosing "Pass-Thru" on the remote, I could hear a more reserved and less airy presentation. While I never felt that the NAD was lacking--in fact, I was regularly proud of its performance--I switching back to the XP-12 seemed to remove a veil from the audio image.

People Make The World Go 'Round

Next, I moved on to the song "Ofelia" by the Lumineers, which gave me a chance to explore the male vocal range on a relatively good recording. Detail and clarity were evident, although the sound was never too analytical. Imaging was excellent, with lead vocals whirling in the middle of the room, without being too forward. The experience reminded me of being seated front and center in a mid-sized live event.

Tracy Chapman's eponymous album is one of my favorite recordings to audition components, and the hit song "Fast Car" in particular provided another impressive display of authenticity. The vocals excelled and took on an incredibly realistic presentation showcasing Tracy's deep and somewhat dry textural vocals. The longer I listened, the more compelling the difference became when compared to the NAD processor. For example, imaging improved, with a wider presentation that was also a bit more forward, creating an improved sense of space between musicians. Additionally, Tracy's voice had more contour and shape, which outlined her vocals in a very realistic way.

Curious to see how the XP-12 would handle some grungier recordings, I played Pearl Jam's "Yellow Ledbetter." While I still could not make out the lyrics on this fantastic track, the song took on a new level of separation between vocals and instrumentation, creating distinct layers, with a deeper and broader image as compared with the NAD.

Older recordings of mediocre quality often sounded better on the XP-12, but in some cases, the flaws in inferior albums became them difficult to listen to. For example, it was difficult to enjoy the song "Just Another Day" by Oingo Boingo, due to its compressed and tinny character. My takeaway here is if the recording is fatally subpar, the XP-12 is not going to resuscitate it, nor should it.

Over an extended audition period, the common thread I heard across all of the tracks I listened to was a larger image, more detailed bass, wider soundstage, and improved layering of instrumentation. To be thorough, I also connected the NAD M17 directly to the amplifiers, removing the XP-12 from its path, and my impressions remained consistent.

I also had the good fortune of adding the $22,000 D'Agostino Progression Preamplifier to the mix for some in-depth comparisons. At this point, though, I was so impressed with what I heard from the XP-12, it was hard to imagine that it could get any better.

Listening through the same tracks, I had to toggle between these two preamplifiers several times before I noticed a difference. After some extensive back-and-forth, I perceived the D'Agostino projected an incrementally larger image that was a tad wider. Additionally, I could sense a smoother character to the overall sound that rounded out the edges of cymbals and other high-frequency elements. This impression was subtle for sure, and more apparent on complicated musical passages. Given the exponential disparity in price between these two components, one would certainly expect some differences in performance. Is the enhanced refinement of the D'Agostino worth the additional expense? That is a personal question for you to answer. Given how similar these two preamplifiers conducted themselves, though, if I had the budget, I would be interested to hear how the step-up Pass Labs XP-22 ($9,500) and XP-30 ($16,500), both of which have separate power supplies, compared to the $22,000 Progression preamplifier before making my decision.

The Downside
There is not much to complain about with the XP-12, but it's worth pointing out that this preamplifier features no built-in DAC, nor the streaming capabilities that many preamps in this price range offer. Some may consider this a shortcoming, so I mention it here, despite the fact that I prefer to keep these two functions separate.

Comparison and Competition
The Bryston BP26 ($5,360) is priced similarly to the XP-12; however, it includes a separate power supply, an optional DAC, and a moving coil phono input. Bryston's sterling reputation and long history in the pro audio world make it a possible contender versus the Pass XP-12 at around the same price.

The McIntosh C53 is a newer preamplifier ($8,000), which replaces the highly regarded C52 model, with more advanced digital inputs and DAC capabilities, including a new HDMI input with eARC. This preamplifier comes loaded with all the current digital technology, which may warrant your consideration depending upon your priorities.

Even the ultra-high-end D'Agostino Progression preamplifier offers a wireless DAC module for an additional $4,500. For me, it is becoming difficult to determine if a component is a preamplifier, a DAC, or a streamer.

For Example, both the Aurender A10 and Cary DMS-600 are two DACs/Streamers that have variable analogue outputs to use directly with your amplifier(s), potentially eliminating the need for a separate preamplifier.

But then again, would an afterthought preamplifier gain stage in a streamer DAC be as good as the XP-12? I can't say without firsthand knowledge, but it would be an interesting comparison. Of course, with the external DAC, you lose source switching. Alternatively, if you're all in with a singular streaming digital platform, it would be awesome if a single component could do it all to the level of the XP-12 or better. I'm just not convinced that they can.

Conclusion
The Pass Labs XP-12 left me with a reminder of how vital a stereo preamplifier is to a high-performance music playback system. It's easy to become consumed with more exciting components like sources and speakers, forgetting how a well-designed preamplifier can enhance the audio experience. And it makes sense given it's near the beginning of the signal path, only second to your source.

I cannot speak enough about how the XP-12 consistently lifted yet another layer of haze from the audio presentation, revealing a broad and deep image that floated in the room, suggesting it could be touched if only you reached out to grab it. Upper frequencies were crisp and airy like a misted fragrance, while the midrange reproduced weighted upper bass along with textured vocals. The XP-12 also delivered controlled and authoritative bass with palpable heft even at low listening levels, which pushed my system to a new level of performance.

Perhaps the most impressive thing about the XP-12 is that it held its own against a preamplifier costing four times its price. After my extended audition, I walk away feeling the XP-12 offers an ultra-high-end experience while maintaining an attainable price point. While $5,800 is not inexpensive, the value is undeniable, given the level of performance. If you have a home theater setup that performs well but is missing something in its presentation of two-channel music, the Pass Labs XP-12 is a fantastic way to inject that ultra-high-end character into your system. Or if your two-channel rig requires help, consider the preamplifier section first and give the XP-12 an audition. It is genuinely a unique component worthy of its inclusion to an upscale system and your consideration.