While the affordable HDTV market is more competitive than ever, few models available on the market today come with the performance level of the Philips 46PFL7505D/F7 7000 series LED HDTV. 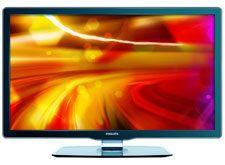 LED based HDTVs are all the rage these days and like anything new in consumer electronics they carry with them an added cost. Sure LED prices have dropped over the past few months, mostly among budget HDTV manufacturers such as Vizio, Westinghouse and Philips, though their "higher end" counterparts, Sony and Samsung, still cling to their higher price tags. Well, good for them. As for the rest of us - may I direct your attention to a rather fine performing and affordable LED based HDTV from Philips: the 46-inch 46PFL7505D/F7 7000 LED series HDTV reviewed here.

How affordable is the 46-inch LED from Philips? On a recent trip to my local Target store, where I found the HDTV in question, the regular retail price was listed at $649.99. Not too shabby. For just under $650 you get a true HD display with a native resolution of 1920x1080 with LED back lighting, a reported contrast ratio of 5,000:1 (typical), 120Hz refresh rate with a response time of two milliseconds and Philips' own Perfect Pixel HD Engine. There are a few other features such as Philips' own Perfect Natural Motion (120Hz motion processing), 3/2 and 2/2 motion pull down, light sensor (auto dimming) and dynamic contrast enhancement.

As for connectivity - your $650 gets you four rear mounted HDMI inputs, a USB input, two component video inputs complete with analog audio inputs, a RGB/PC input, a mini audio input, a digital audio output and an antenna in. Besides being able to play back 1080p content via your Blu-ray player, the 46PFL7505D/F7 can also playback DivX, MPEG 1 and 2, AVI, JPEG and MP3 files via its USB input. About the only thing the Philips won't do is 3D, which may or may not be a bad thing for some consumers.

The 46PFL7505D/F7 itself is a stylish piece of kit measuring just over 43 inches wide by one and half inches deep and 26 inches tall. The 46PFL7505D/F7 tips the scales at a respectable 37 pounds and despite being offered at an affordable price seems to be built rather well and appears decidedly upscale. Among all the HDTVs on display at my local Target store the Philips stood out in terms of its build quality. For a more detailed list of the 46PFL7505D/F7 features and options please visit Philips' website.

As for its performance the Philips' image was rather impressive, possessing rich, natural colors that possessed solid detail and texture throughout without seeming "blocky," which some of the other budget sets I've seen recently often suffer from. There was a bit of noise present in the brighter regions of the screen, such as white test patterns, but nothing that was ultimately too distracting. Blacks were solid and plenty deep though their depth came at the expense of some detail. Motion was smooth throughout and artifacts, especially motion artifacts were kept to a minimum with less than HD quality material and were virtually non-existent when viewing content on Blu-ray disc. All in all, the Philips possessed a well-rounded image that checked all the boxes necessary for casual enjoyment and even a few beyond that.

Read about the high points and low points of the Philips 46PFL7505D/F7 on Page 2. High Points
• The Philips' build quality, despite being an affordable HDTV, is first rate and features some design cues that make it appear far more upscale than it actually is.
• The Philips' feature set is nice for the price and it possesses enough inputs, especially HDMI, for this reviewer to be satisfied.
• In terms of its overall picture quality the Philips practically defines the term "sum of its parts," for when viewed as a whole the Philips' performance is better than average; however if you focus too long on any one particular area you can begin to pick it apart, which is why I recommend it for casual viewing and not reference or dedicated theater use.

Low Points
• Philips has been in and out of favor with enthusiasts over the years and as such has been a player and then not a player in the US market, making them a shaky investment at best. Thankfully the Philips in question here is cheap enough that should Philips "disappear," you're not going to be out house and home.
• The Philips does not support nor will it playback 3D content of any kind.

Competition and Comparison
There's a lot of competition among budget HDTVs, even a few featuring LED backlighting. A few notable HDTVs that deserve a look along with the Philips are LG's 42-inch 42LK450, Vizio's E3D470VX 47-inch HDTV and Panasonic's TC-L37E3 LED HDTV.

For more on LED HDTVs including the latest news and reviews please check out Home Theater Review's LED HDTV page.

The sub $1,000 HDTV market is hotter than ever these days with virtually every manufacturer offering some kind of affordable solution. While there are a few sub $1,000 HDTVs out there that pack more, in terms of features, than the Philips reviewed here, few pack the same all-round performance it does. Not to mention possess LED backlighting like the Philips does. If you're looking for an affordable, LED based HDTV that will produce an enjoyable two-dimensional image be it in SD or HD the Philips 46PFL7505D/F7 is worth a look.