Philips has announced that its 5000 Series of UHD TVs is now available. This line of LED/LCD TVs features HDR10 support and Chromecast built-in, for wireless streaming from mobile devices and compatibility with Google Assistant voice control. The 5000 Series... 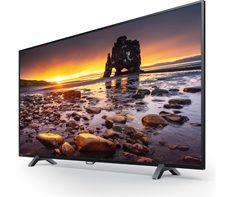 Philips has announced that its 5000 Series of UHD TVs is now available. This line of LED/LCD TVs features HDR10 support and Chromecast built-in, for wireless streaming from mobile devices and compatibility with Google Assistant voice control. The 5000 Series includes four models, with screen sizes ranging from 43 inches ($529.99) to 65 inches ($1,199.99).

From Philips
New 5000 series Philips 4K TVs launched today feature Chromecast built-in, a platform that that lets users cast entertainment from their phone, tablet or laptop right to the TV and control the entertainment on the TVs using their mobile device or Google Home powered by the Google Assistant. Announced at CES, the new sets are now available.

With Chromecast built into four Philips 5000 series sets, users can stream content from more than 1,000 apps to the TV by simply tapping the Cast button within any Chromecast-enabled mobile app. The new 5000 series Chromecast built-in sets are available in four screen sizes: 43-inch class, 50-inch class, 55-inch class and 65-inch class. Other 5000 series features include HDR, 120 Perfect Motion Rate, 4K upscaling to get the most out of Full HD programming, and 802.11ac wireless LAN with MIMO antennas for faster, more reliable connections and a better streaming experience.

With Chromecast built-in, the user's phone becomes the remote. Simply tap the Cast button within a Chromecast-enabled mobile app to cast entertainment to the TV. No new logins or downloads required. The phone is used to search, browse, queue, and control what's playing on the TV from anywhere in the home. While casting, the phone can be used for other tasks, including engaging with social media, texting, and making and receiving calls. Chromecast works with more than 1,000 apps to provide access to more than 200,000 TV shows and movies, 30 million songs and more. In addition, Philips TVs work with Google Home powered by the Google Assistant. Users can control entertainment on Philips 5000 series TVs using only their voice. A new recently announced Chromecast feature that will display information on the TV in response to certain voice commands will be functional in early 2018.

The most significant contribution to the picture quality of the 5000 series is HDR, offered in all Philips 4K televisions. HDR, or High Dynamic Range, provides a striking improvement in brightness, contrast and color performance. For clear and vibrant images during fast action scenes, 5000 series TVs feature Philips 120 Perfect Motion Rate that reduces response time to produce faster picture transitions and reduce motion artifacts.

HDMI 2.0a with HDCP2.2 on all HDMI ports and built-in HEVC and VP9 decoders mean that 5000 series TVs can handle HDR 4K Ultra HD Blu-ray plus cable, satellite, gaming consoles and streaming 4K media, including Netflix and YouTube 4K.

Screen sizes and prices for the Philips 5000 series UHD TVs with Chromecast built-in are: