The SC-09TX provides power that is "bountiful and robust, making it one of the better sounding receivers in the game today." It also "possesses more features and customizable options than even the most fanatical home theater enthusiast is ever like to need and/or use" 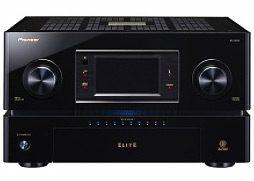 For years, if you wanted the best out of your home theater experience, you bought separate components that allowed you to effectively tailor your system to your individual needs and budget and to hell with how many cables it took. With the advent of very high-end AV receivers, consumers were given a choice between multiple amplifiers and often out-of-date processors for a single-box solution that usually featured more bells and whistles than you could ever possibly need, all for a price that was much lower than expected. While receivers aren't shy when it comes to features, they've never really tickled the fancy of the purists when it came to their overall sound and picture quality until, perhaps, now.

• Read reviews of top-level home theater and HDMI receivers from HomeTheaterreview.com.
• Look at Blu-ray player options to integrate with the SC-09TX.

The Pioneer SC-09TX, reviewed here, is a receiver in the traditional sense, but follows the lead set by the separates camp as well. For starters, it's not cheap. At $7,000 retail, it is one of the most expensive receivers you can buy today. It is hopelessly good-looking and appears every bit as expensive as it truly is, with its high-gloss piano lacquer façade, dual input and volume knobs flanking its front-mounted LCD display. The front-mounted display can showcase the SC-09TX's menus, features, source image or any combination of the three, which is hugely beneficial to those who have projection-based systems, but may want to listen to Internet radio or the iPod without wasting valuable bulb time. Just below the screen, there is a bit of a design gap, accentuated by a pale blue light and 10 pale blue LED lights. This is the ICE amplifier section that, while technically in the same chassis, is electronically separate from the other components.

The SC-09TX's ICE amplifier section churns out an impressive 140 watts across all 10 of its channels. If you choose to utilize the SC-09TX in straight stereo, the power ups to 200 watts across the left and right mains. Either way, the power output should prove more than adequate to satisfy even the most power-hungry of loudspeakers and/or fill the largest of home theaters. Also, because the SC-09TX employs ICE amps for its power, it is incredibly efficient drawing little current (to the amplifiers at least) and displacing little heat. And if 140 watts times 10 isn't enough for you, the SC-09TX has a full set (10.2) of preamp outputs, so you can upgrade to even more power.

Topside, the SC-09TX has six HDMI inputs and dual HDMI outs. It features up-scaling of analog video to 1080p via HDMI. If you're utilizing HDMI-only sources, the SC-09TX will not up-convert lesser HDMI sources to 1080p, proving to have only pass-through capabilities. This may or may not be an issue for many of you, as most next-generation players are all 1080p-capable, so no up-conversion is needed. The SC-09TX supports all audio formats, including SACD and DVD-A and the latest surround sound codecs like Dolby True HD and DTS Master Audio. All of the lesser surround sound codecs can be found on the SC-09TX, but with Blu-ray and all things uncompressed and HD being hot topics, the SC-09TX has you covered.  The SC-09TX has a host of analog video connections for your legacy components, as well as a barrage of digital audio connections, though with so many HDMI inputs on tap, you're bound to leave many of them empty if your system is relatively up to date.

The SC-09TX is packed with features, from video processing to uncompressed audio codec support to automatic room correction and EQ, all of which can be accessed and tailored using the SC-09TX's onscreen menu. The SC-09TX even has network capabilities to allow you to share your music, movies and photos through Pioneer's own Home Media Gallery interface. The SC-09TX's menus are vast and provide a level of control I've not experience before from a receiver, yet with great power comes great responsibility and you'll want to refer to the manual or your installer in order to get the most from your investment.

Read about the high points and low points of the SC-09TX receiver on Page 2.

High Points
• The SC-09TX possesses more features and customizable options than even the most fanatical home theater enthusiast is ever likely to need and/or use.
• The SC-09TX's power on tap is bountiful and robust, making it one of the better-sounding receivers in the game today, with overall audio performance not unlike what I heard from my Bel Canto REF 1000 mono blocks, which also use the B&O ICE amp design.
• The onboard LCD display is essential, not only for making adjustments to the SC-09TX, but because it is hugely beneficial in navigating DVD and/or Blu-ray menus without powering on your whole system.
• While the SC-09TX's cost is on par with a mid-fi separates system, its performance is more high-end than that of most receivers in almost every conceivable way.
• The SC-09TX's dual HDMI outs, as well as dual subwoofer outputs, are nice features that more users are bound to employ.

Low Points
• The lack of up-conversion of other HDMI-equipped components may hurt the SC-09TX in the eyes of some enthusiasts, though it never became an issue for this reviewer.
• The learning curve and set-up procedures for the SC-09TX are steep and not altogether intuitive, requiring the need for the manual and/or the custom installer.
• The SC-09TX's remote is utter garbage and should be thrown away immediately upon completion of set-up. With a product of the SC-09TX's caliber, you'll want to use a third-party remote such as a Crestron or an AMX system.
• The piano-black façade of the SC-09TX is very nice and adds to its regal stature, but it's a bitch to keep neat and tidy.

Conclusion
What we have here with the Pioneer SC-09TX is a state-of-the-art separates system in receiver's clothing. While many receivers claim to possess the performance of high-end separates, none of comes closer than the SC-09TX does. As up to date as any processor, with enough gusto in the amps to match, the SC-09TX is about the best-rounded A/V receiver you can buy today. The price tag may be steep and finding a dealer may be a bit trickier than for lesser Pioneer receivers, but if you have the coin and want a high-end receiver with the soul of a separates system, look no further than the Pioneer SC-09TX. Highly, highly recommended.

Additional resources
• Read reviews of top-level home theater and HDMI receivers from HomeTheaterreview.com.
• Look at B
lu-ray player options to integrate with the SC-09TX.

AV Receivers vs. AV Separates: Which Is Right for You?

The Pioneer SW-8MK2 Meets the Meters