If you are on a budget and in need of pair of bookshelf speakers, try out the Pioneer SP-BS21-LR. Andrew Robinson was very impressed with the performance that came from these speakers. 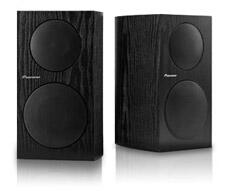 During a recent trip to Best Buy I wandered into one of their two sound rooms where one of the Blue Shirts was giving a home theater demo to a customer. Never one to pass up a Best Buy “demo,” I quietly let myself in and enjoyed the show. After what seemed like forever – seriously a home theater demo should be five minutes max – the lights came back on and the customer left sans any home theater equipment. Rather than ask me if I needed assistance, the Best Buy employee walked out. I browsed the room in silence and came upon a pair of loudspeakers I’d never seen or heard before. I instantly recognized the name, for Pioneer has been with us since the beginning of time, but yet I’d never heard of their $99.99 bookshelf speakers, the SP-BS21-LR, before. Rather than ask for a “demo,” I grabbed a box and headed for the register. I mean, come on, $100 for a pair Pioneer branded bookshelf speakers, how could anyone resist?

The SP-BS21-LR is a two way, bass-reflex bookshelf speaker that is the brain-child of designer Andrew Jones who is Pioneer’s Chief Speaker Engineer and the man responsible for their touted T.A.D. loudspeaker – clearly Jones knows a thing or two about loudspeaker design. The SP-BS21-LR come in a black ash finish and feature a curved cabinet design to minimize internal vibrations. A knuckle rap on the top of the cabinet reveals solid construction but nothing too inert either. So far, so good. The SP-BS21-LR measures in at seven inches wide by nearly 13 inches tall and eight inches deep. It weighs eight and a half pounds, which is light considering its size and build quality. The SP-BS21-LR possesses a four inch woofer mated to a one inch soft dome tweeter, giving it a reported frequency response of 65Hz to 20kHz meaning the SP-BS21-LR will require a subwoofer or two for true, full-range performance. Still its six Ohm load and 84dB sensitivity make it ideal for most modern AV receivers and/or integrated amps – such as the ones offered by Pioneer.

In terms of sound I must admit there’s a lot to like here. I’m not going to shout from the mountain top that the SP-BS21-LR manages to somehow best speakers costing five times as much, however for its sub $100 asking price Pioneer has a lot to be proud of. While it would be easy for me to dismiss the SP-BS21-LR’s bass performance as non-existent, what is present seems richer and deeper than what the spec sheet would have you believe. Still, you’ll want to mate it to a subwoofer if you plan on any sort of spirited, full-range listening. There is a bit of bump in the lower midrange (no doubt one of the factors contributing to the illusion of more bass) that lends more presence and weight to vocals, be it male or female.

The SP-BS21-LR’s high frequency performance is quite good, possessing a smooth, largely indifferent demeanor that has a bit of natural sparkle, which is surprising given the speaker’s asking price. In terms of soundstage the SP-BS21-LR is, again, surprisingly able to create an intimate stage for the performances to exist within. Is it laser focused? No, but the definition it does have will have you scratching your head wondering how more expensive speakers manage to do worse. Dynamically, the SP-BS21-LR seems largely unflappable, able to produce copious amounts of volume without a great deal of strain, though at their limits things become a bit more two-dimensional. Clearly, there’s a reason why Pioneer has chosen to package the SP-BS21-LR into a 5.1 home theater system in the SP-PK21BS that is available direct from Pioneer for $399. As good of a value as I believe the SP-BS21-LR’s to be, I think a full 5.1 surround sound system comprised of four, SP-BS21-LRs, a matching center and subwoofer for less than $400 is even better.

Read about the high points and low points of the SP-BS21-LR loudspeaker on Page 2.

High Points
• The SP-BS21-LR’s build quality is fantastic and while it comes only in
black, there’s little to fault when you consider it appears and feels
more robust than speakers costing twice the price.
• The SP-BS21-LR’s sound is a touch warm with a slightly laid-back and
polite top end that should serve a wide variety of musical tastes
nicely, not to mention lower resolution downloads from, say, iTunes.
• Despite not having a great deal of bass, those with smaller rooms or
thinking of using the SP-BS21-LRs as desktop speakers may be able to do
without a subwoofer.
• While I only had a pair of SP-BS21-LR on hand for my demo, I have to
imagine that they’d make fine home theater speakers as well, especially
for those tight on space and cash.

Low Points
• While the speakers themselves may only cost $99.99, that isn’t the
true cost of ownership for you’ll need to invest in floor stands or wall
mounts to ensure you’re getting the best the SP-BS21-LR’s have to give.
Also, if you want to hear every note of your favorite music you’ll have
to add a subwoofer as well. When you take all of that into
consideration, the biggest knock against the SP-BS21-LRs is that you can
get four of them plus a center and a subwoofer for $200 more with the
SP-PK21BS speaker package from Pioneer.
• While built to a high standard and finished with an attention to
detail, there’s no mistaking the SP-BS21-LR for anything other than a
loudspeaker, which for some may be a deal breaker when you consider
there are a number of affordable, lifestyle oriented products currently
available – products such as Orb Audio for example.

Conclusion
There’s a lot to be excited about when it comes to the Pioneer
SP-BS21-LR bookshelf loudspeaker for it’s a phenomenal overachiever when
you consider a pair can be had for less than $100. The only reason I
don’t blindly recommend them to anyone looking to build a home theater
or audiophile system on a budget is because I believe that Pioneer’s 5.1
speaker package featuring four, SP-BS21-LR speakers mated to a matching
center channel and powered subwoofer for $399 is the better value.
Still, there’s no denying the SP-BS21-LR is a great little loudspeaker.