Plasma Group Fights Back On Energy Issue This Holidays

Plasma Group Fights Back On Energy Issue This Holidays

If your family is still clinging to a bulky tube TV, maybe this is the holiday season to give the gift of a flat panel. For those who might have questions about plasma technology's energy consumption, the Plasma Display Coalition has some numbers you might find interesting. 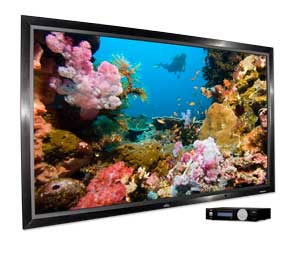 One of the best gifts to give your family this holiday season can also be a great energy saver at home. An energy saving and crowd pleasing option is the purchase of a flat-panel Plasma HDTV to replace a hulking 36-inch color TV picture tube set that was state-of-the-art technology only a decade ago. Consumers choosing flat-panel Plasma HDTV displays today are bringing home the most energy efficient Plasma televisions ever created, a move that is especially smart if the Plasma set is replacing an old-style 36-inch picture tube television that consumes significantly more power than the most popular flat-panel displays. Current big screen Plasma models are even more energy efficient than some 27-inch picture tube sets sold just a few years ago. A typical new Plasma HDTV costs less than 20-cents a day to operate, with ultra-efficient designs and power supplies that require less than 25-cents a year to operate on standby power. Despite what some utilities and environmental activists have claimed, TV energy use actually represents only a fraction of the overall energy consumed in a typical American household - generally less than that of two 75-watt light bulbs. In fact, a flat-screen Plasma HDTV consumes much less energy than the family refrigerator. As important as refrigerators are, they still don't provide years of entertainment, education, and information enjoyment like an HDTV. The cold hard fact is that over a year's time, a well-known brand 21 cubic foot basic refrigerator (the appliance industry's best selling size) can easily consume 45 percent more energy than a new 42-inch Plasma HDTV. "Just since 2007, Plasma TV manufacturers have successfully reduced plasma display power by more than 20 percent, year over year. Today's Plasma HDTVs delivers not only superior picture quality and the widest viewing angle but also outstanding energy efficiency. Even though a new Plasma HDTV delivers at least six times the picture resolution of older 36-inch analog tube-type TVs on a screen that is some 50% larger, the newer sets actually consume less energy than ever before. Typically, a 42-inch to 50-inch Plasma HDTV will consume less than half the energy of the most popular type of big-screen tube TV sets sold just a decade ago," said Jim Palumbo, President of the Plasma Display Coalition. "We strongly encourage consumers to consider recycling their older, big picture tube televisions and replace them with an energy efficient Plasma HDTV model. The result will be less energy use, more money for the household budget and a rewarding entertainment experience," said Palumbo.