Digital audio has created the need for digital to analog converters. Wireless audio can make this more difficult. HomeTheaterReview.com writer Brian Kahn takes a look at a possible solution in the PlayGo USB Wireless DAC. 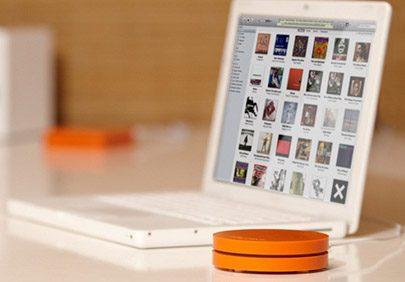 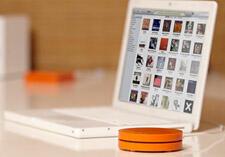 It is hard to believe that USB DACs are a relatively new group of audio components. One can hardly peruse a stereo-related website or magazine without seeing a multitude of new USB DACs, each promising to offer the best performance, flexibility, ease of use or some combination thereof.

The standout feature of the PlayGo USB is its unique industrial design. Both the transmitter and receiver units are made of Corian. Both the receiver and transmitter are about one-and-a-quarter inches high, with a groove horizontally bisecting the units. The transmitter is circular with a four-inch diameter and the receiver is four inches square. The horizontal groove lights up with different colors from hidden lights to display status. A combination of solid and pulsing red, green and blue lighting are used to confirm key presses, power and connection status (solid red: units on but not paired; solid green:-on and paired; pulsing green: music is playing; alternating pulsing colors: the units are connecting). I never found the lights to be distracting, but they can be turned off if you do.

The transmitter plugs into a USB port on both Windows and Macintosh computers and shows up as an available audio output device. Everything else is automatic. Basic transport and volume controls can be found on top of the receiver unit, but I left the PlayGo in fixed volume mode and used Apple’s remote app to control my iTunes playback.

PlayGo’s parent company is BICOM, which has its roots in telecommunications. PlayGo is also related to Zoet, the company that is working with Thiel to create Thiel’s wireless audio system. Accordingly, I was not surprised to learn that the PlayGo utilizes its own proprietary wireless transmission system. While the system utilizes an 802.11 b/g transmission chip set, it is modified to a real-time transmission protocol that can connect up to four receivers. The PlayGo USB DAC utilizes an asynchronous sample rate converter that converts all audio from 16 bit/48 kHz to 24 bit/96 kHz before converting the signal to analog digital output, which can also be configured to 24 bit/192 kHz.

I did most of my listening through the PlayGo’s analog outputs set to fixed volume mode, although if I had a pair of powered speakers handy, I would likely be utilizing the variable volume mode quite a bit. The PlayGo compared favorably with the USB input on my original Cambridge Audio DacMagic. The PlayGo did a good job reducing jitter-related artifacts while presenting a lively sound.

Read about the high points and low points of the PlayGo USB Wireless DAC on Page 2. 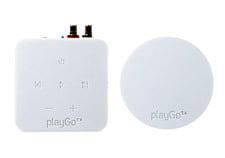 High Points
Setting up the PlayGo system could not have been easier. Going from the box to listening was accomplished in just a few minutes.
PlayGo does not rely upon a preexisting wireless network.
Sound quality through the PlayGo’s analog outputs surpassed that of the ubiquitous Apple Airport.
The industrial design of the PlayGo is both unique and attractive and will likely prove to be very durable, due to its use of Corian.

Competition and Comparisons
As I mentioned earlier, USB DACs are becoming quite popular, as more and more audiophiles, new and old alike, migrate to all-digital or computer based systems. Because of this, the PlayGo is not alone within the category of USB DACs. Other notable products include High Resolution Technologies’ Music Streamer DAC and Cambridge Audio’s DacMagic. For more on USB DACs and/or more traditional digital to analog converters, please visit Home Theater Review’s Digital to Analog page.

Conclusion
The PlayGo is a capable wireless USB DAC that bridges a gap between USB DACs and wireless music players. While the PlayGo has wireless capabilities, it does not provide the functionality of wireless music streaming devices, such as those offered by Sonos and Logitech. In place of this increased functionality, the PlayGo offers simplicity. PlayGo does not require any dedicated playback software to be running. The user can utilize whatever playback software he or she chooses. It is not even necessary to have a network, wireless or otherwise.

Where the PlayGo shines is in situations where one wants to play audio off of a computer to a remote stereo location, especially one without an available wireless network. For example, you go on vacation and want to stream music to a stereo but do not have access to the wireless network at that location. Simply plug the PlayGo components in and you can transmit audio without running any wires other than a couple of power cables. This would have also come in handy at a recent business presentation that I attended, where the presenter was stuck using his laptop for the audio portion of his presentation. With a PlayGo, he could have transmitted the audio portion of his presentation to the same display that was showing the video portion of the presentation. I have no doubt that the video display would have had more capable speakers.

If I were looking to use the PlayGo only in a fixed location where I could easily run cables, I would likely spend the $449 asking price of the PlayGo on one of the many fine wired USB DACs and accompanying cable. However, if wireless connectivity or mobility is desired, the PlayGo provides a very simple and reliable approach that has the important benefit of providing good sound quality.

You'll automatically be entered in the HTR Sweepstakes, and get the hottest audio deals directly in your inbox.
0 0 votes
Article Rating
Subscribe
Connect withD
Login
Connect withD
0 Comments
Inline Feedbacks
View all comments
Author
Brian Kahn
HomeTheaterReview Product Rating
Value:
Performance:
Overall Rating:
When you buy through links on our site, we may earn an affiliate commission. Your support is greatly appreciated!
This is the static ad content. This is just a placeholder for now to get things styled.
Visit Website