Polk Audio has created an entire new line of speakers featuring floorstanding, bookshelf, and center channel models. The company will be displaying the flagship tower speaker at the 2011 Rocky Mountain Audio Fest. 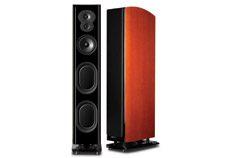 "We're happy to report that the new LSiM reference line is just now shipping to our dealers," says Polk's Vice President of Product Line Management, Mark Suskind. "The LSi line has been Polk's flagship selection for almost a decade, and the new LSiM series further ups the ante, making it the most advanced speaker line we've built in our 40 year history."

The new Polk LSiM series encompasses a full range of tower, bookshelf, center and surround channel models. The performance objectives for the series were set with a high bar - open, transparent, three-dimensional sound, with accurate tonal and temporal response and compatibility with a broad range of past, present and future electronics.

Standing front and center in Polk's exhibit are two 4-way floor-standing tower models, the LSiM 707 and LSiM 705, the latter of which will be demonstrated at RMAF. Each tower features transducers built with Polk's Dynamic Balance design technology, which combines the latest in composite materials and computer-assisted geometry to create drivers with reportedly low distortions and artifacts. Both towers sport an array of these drivers, highlighted by Polk's Dynamic Sonic Engine enclosure, a single molded component that carries both a Polk proprietary 3.25" Extended Linear Motion (ELM) mid-range driver and a 1.0" Advance Isotropic ring radiator (AIR) tweeter.

According to Polk, combining these transducers in a single array produces an uncommonly wide and uniform dispersion pattern. The top-of-the-line LSiM 707 complements this array with a 6.5" ELM mid-woofer driver and dual 6"x9" ELM subwoofers featuring Polk's PowerPort, which attempts to maximize low-bass energy ordinarily lost as air turbulence and heat exiting the enclosure. The smaller LSiM 705 features the identical Dynamic Sonic Engine for high frequencies and midrange, along with Polk-designed ELM 5.25" mid-woofer and dual 5"x7" ELM subwoofers. A bookshelf-sized version of the towers, the LSiM 703, utilizes the same technologies as the towers, minus the internal subwoofer drivers.