Polk is coming to market with a two-piece soundbar product called the Surroundbar 360 that claims it doesn't need a subwoofer. The electronics are in one box and the speakers matched with your HDTV. Packing Polk's signature sound, the Surroundbar 360 is an innovative new speaker solution in an emerging category. 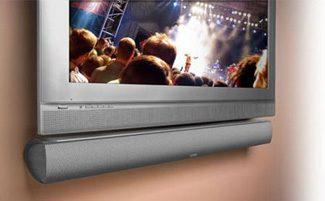 With live demonstrations scheduled to take place at this week's 2008 CEDIA Expo in Denver, CO, the SurroundBar 360) speaker (SRP: $1,199.95 is Polk Audio's response to consumer demand for true surround audio and bass from a single cabinet. The gloss black enclosure, which is designed to complement all flat-panel displays, delivers full 360 surround sound thanks to Polk's proprietary SDA® (Stereo Dimension Array) technology that the company first introduced in its flagship 1980s speaker models.

"Consumers who invest in a high-definition flat-screen display understand the difference between average and superior performance, which is why the original SurroundBar compact speakers are such a hit with end-users," commented Al Baron, Product Line Manager, Polk Audio, Inc. "Now, with SurroundBar 360, we can offer these same consumers an equally impressive soup-to-nuts amplifier/processor with all the necessary ingredients for high performance home theater without the endless clutter of boxes and cables."

The speaker enclosure is magnetically shielded, so it can be mounted as close to the display as conditions dictate.