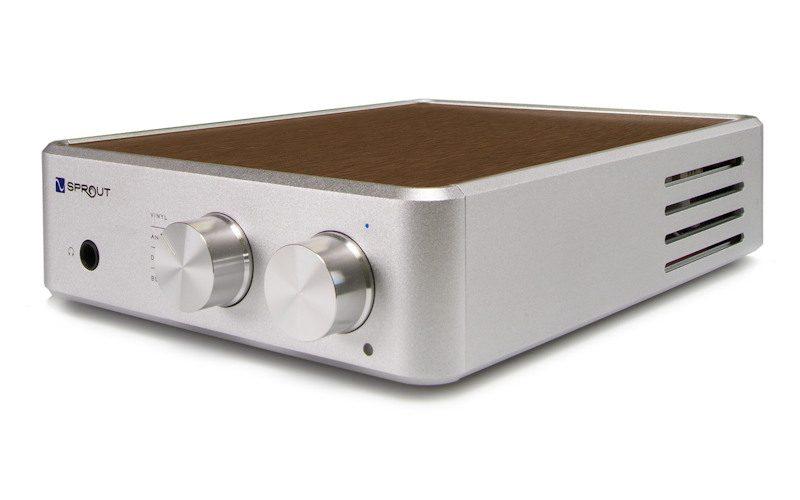 Steven Stone says that the updated PS Audio Sprout100 isn't merely better than the original; it's a great little overachiever with the right inputs and outputs to put together a first-rate desktop or room-based audio system.

On Home Theater Review's companion site, Audiophile Review, I've often covered entry-level portable audio components and the question of how portable audio aficionados can migrate to room-based systems (or even if they will). And while there are lots of bargain-basement-priced low-power integrated amps, as well as a plethora of four- and even five-figure integrated amplifiers for big-boy systems, finding a great-sounding integrated amplifier with enough power, inputs, and outputs to put together a serious starter-priced high-performance audio system has been more of a challenge. Cue the music; enter the PS Audio Sprout100 ($599 MSRP).

The Sprout100 is the new, improved version of the original PS Audio Sprout. It doubles the rated output of the previous one from 50 watts to 100 watts per channel into 4 ohms. The new Sprout100 also adds a nifty remote, boosts PCM capabilities from 192/24 to 384/24, and adds DSD capabilities up to DSD128. Bluetooth sources run natively into the Sprout100's ESS Sabre 9016 DAC chip.

The Hookup
The Sprout's dimensions are almost as tiny as its name: just 6 by 8 by 1.75 inches. It can handle five different sources: vinyl, analog line level, digital via USB, digital via Toslink, and wireless Bluetooth. The vinyl input has 40 dB of gain and supports moving magnet cartridges with outputs between 3 and 10 mV with 47 kilohm loading. The analog input can handle a maximum input level of 2.1 VRMS and has 10 kilohm input impedance. The USB and Toslink digital inputs share the same "digital" source setting, and if you want to use Toslink, the USB input must not be active. The Bluetooth uses an internal antenna, so there's nothing external to connect.

The Sprout100's outputs include one pair of speaker connections that use a banana-type connection. PS Audio supplies four adapters, though, so you can use spade lugs, bare wire, or even a bi-wire connection. The Sprout 100 also has a single subwoofer output, as well as a pair of stereo RCA line-level outputs.

The built-in headphone amplifier features a new discrete "zero impedance Z-feedback" circuit that PS audio claims can "drive virtually any pair of headphones you can throw at it with perfect transient impulse response." This improvement is due primarily to the headphone amplifier's high slew rate of 1300 volts/microsecond, which is 100 times faster than the previous Sprout's headphone design.

Bluetooth comes in many varieties with different codecs. The Sprout100 uses Bluetooth 2.0 with no additional aptX or LDAC compression/resolution enhancements. According to PS Audio, they tried including aptX but found that the coverage range and overall fidelity were no better for the added cost and complexity, so they opted for plain vanilla BT 2.0.

Controls on the Sprout 100 are about as simple as they can get. The front panel has two knobs; one is a volume control, the second is the source selection. The only two additional features on the front panel are the quarter-inch headphone connection and a small LED light in the upper right-hand corner. This LED's color changes depending on the Sprout100's current settings. Red is protection mode (which you hopefully will never see), white indicates the bass-boost function is active, blue means the bass boost is turned off, and dim blue or white is mute mode.

The bass boost was easily the most controversial feature on the original Sprout since it could not be turned off. On the Sprout100 you have the option of turning it off one of two ways: when you connect a subwoofer to the subwoofer output the Sprout100 automatically senses it and turns off the bass boost. You can also manually toggle the boost by pushing in the volume control for a long press, and the light will change from white to blue (or vice versa).

The Sprout 100's compact remote may not be adorned with bells, whistles, and flashing lights, but it has the essential controls laid out in an elegant minimalist fashion. The remote lets you turn the Sprout100 on and off, mute, and adjust the volume up or down. If you want to change the source you will have to get off your duff and turn the source selector on the Sprout100's front panel. Remember, though: exercise is good for you. One more detail: I suppose that the remote has a replaceable battery but finding out how to replace it looks challenging since there is no obvious battery compartment or screws to unscrew anywhere on the unit.

Performance
I adore the classic rock sound of Silverplanes' EP Bombardier, mixed by Geoff Emerick. If you love the sound of an electric guitar like I do, I invite you to immerse yourself in the thick chocolaty goodness of Silverplanes' four chimey axes, each rich with harmonics and crunch yet clearly delineated. The Sprout100 does a fine job of preserving spatial cues and keeping each guitar track in a particular location in the soundstage.

If you've never heard of Trace Bundy, you are in for a surprise. He employs a highly-developed "tapping" guitar style, which was pioneered by Michael Hedges. This song not only shows the complexity of his technique, but will also deliver lots of fast, percussive sounds to challenge your system's ability to retain the fast-transient information and image specificity. The Sprout100 did an exemplary job of preserving the fast transients and still sounding relaxed and natural. Warning: guitarists may find Bundy's open-tuned hammer-on technique to be mind-blowing.

Radka Toneff's Fairy Tales was among the first digital recordings made in Norway, using an early-generation digital recorder. Tidal recently released a new remastered version of the album that sounds better than the original release ever did. Unfortunately, (or fortunately for Tidal) YouTube only has versions ripped from the earlier release, but it only gives you a taste of its recording quality. On the Sprout100, even though it doesn't support MQA decoding (the first unfold can be done by software, including Roon and Audirvana+ 3.0,) the sound had a level of intimacy and detail that easily eclipsed the earlier versions. When I compared the YouTube track with the Tidal version through the Sprout100 it was obvious that the Tidal track was a much better, more highly resolved, version.

When you plug a pair of headphones into the headphone output, the speaker outputs, line-level output, and subwoofer output are muted, which has long been the standard convention. I tried a wide range of headphones with the Sprout100, including the Empire Ears Zeus custom in-ear (115dB sensitivity) and the Beyerdynamic DT-990 600-ohm version.

With the Zeus, I did notice some low-level hiss when no music was playing, but the Sprout100 had no problems driving the power-hungry DT-990 to satisfying levels with excellent bass control and precise soundstaging. Just because I could, I hooked up my pair of HiFiMan HE-1000 V2 headphones ($2999 MSRP) to the Sprout100 and turned it up. Again, I found the Sprout could drive the HiFIMan HE-1000 V2 with ease. Bass was tuneful, punchy, and always under control.

The Downside
What does the Sprout100 lack by way of "essential" features? None, really. Sure, there are some things that would be really nice to have, such as additional digital and analog inputs and outputs, Roon Endpoint capability, and internal MQA rendering. But are these essential? Not if you plan to use the Sprout100 tethered to a computer or turntable. And certainly not if it's going to be your first room-based system or destined to be connected to a streaming device in a bedroom or den.

I suppose someone such as myself was bound to complain that the real wood veneer top plate looks no better (and perhaps worse) than many artificial "wood" surfaces I've seen. It sorta screams "RV" to me. I can think of lots of alternatives. Formica makes a good-looking fake Corinthian leather surface that I think would look fantastic in place of the wood. And there's the old fave, glossy black plexiglass, which I also think would look better than the current walnut slivers. But hey, if the top surface really bugs you there's always contact paper. Maybe purple paisley...


There are lots of extremely inexpensive combination streamer/DAC/amplifiers from companies like SMSL. They work well with super-efficient speakers but have definite power limitations.

The next step up the price/performance rung brings you to options such as the Monoprice Pure Tube stereo amplifier with Bluetooth. But the Monoprice still only delivers ten watts of power from its two EL-8e tubes per channel, has no USB inputs, and no subwoofer output. The PS Audio Sprout100 is far more flexible and capable of driving a much wider assortment of loudspeakers.

I had the new Mytek Liberty DAC in my desktop system before the Sprout100. The Liberty is more money ($1000 MSRP) and lacks a power amplifier section. It does support MQA, though and has more digital inputs as well as balanced outputs, but it does lack analog and Bluetooth inputs. Also, since the Liberty does not include a power amplifier section, you must add in that additional cost.

Conclusion
While I never voiced them in print, I had some reservations about the original Sprout due to its always-on loudness curve and lower-than-I-usually-need power output capabilities. The new Sprout100 eliminates both of those concerns. Not only does it sound amazingly good, but it has enough of the right inputs and outputs to put together a first-rate, borderline drop-dead kick-ass desktop or even room-based audio system.

The bottom-line question, of course, is whether or not the PS Audio Sprout100 is a good value. In that regard, I say yes. Hell yes.