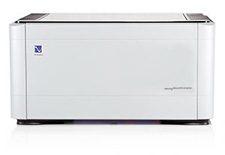 From PS Audio
PS Audio, maker of fine audio components since 1973, is pleased to announce the Canadian premiere of the forthcoming BHK Signature 250 Amplifier at the Montreal Audio Show/Salon Son & Image, March 27-29, 2015. PS Audio will be exhibiting in Room #2417 of the Hotel Bonaventure with their Canadian distributor, KimberCan.

First shown in prototype form at Rocky Mountain Audio Fest in October, the Bascom King-designed BHK Signature 250 stereo power amplifier features a triode front end followed by all-MOSFET circuitry, including the output stage. Power ratings for the amplifier are 250 watts per channel into eight ohms, 400 watts per channel into four ohms. The amp will also be available in mono-block form as the BHK Signature 300. The BHK amps are the first products in PS Audio's history to feature vacuum tubes, and are expected to be in full production by May, 2015.

PS Audio will feature the BHK Signature 250 Amplifier in an all-PS system along with the award-winning DirectStream DAC, PerfectWave Memory Player, and a P10 PowerPlant. Loudspeakers will be the Neat Acoustics Motive SX1s; interconnects and cables will be Kimber Kable.

Paul McGowan, Founder and CEO of PS, will be present in the room, along with Travis Townes, PS' International Sales Manager. "Montreal is a beautiful city, and I'm looking forward to being at the show again," said McGowan. "Travis and I will be happy to meet the public and those in the industry. We're sure that visitors will be impressed by the new amps, and the show should be a blast!"