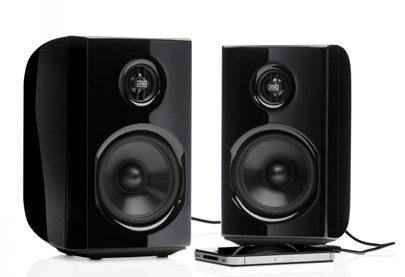 Getting better sound out of a computer is something that is more important than ever. PSB offers their solution with the company's Alpha PS1 speaker. Darryl Wilkinson tries it out to see how it performs. 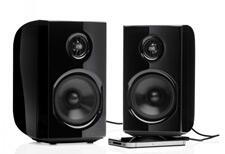 Call me weird - I've been called worse - but I don't like to listen to music (or anything else) while I'm working at my computer. Half of the time, I wear earplugs in order to block the everyday distractions of barking dogs, ringing phones, chiming doorbells, and you name it. However, I couldn't resist the chance to audition PSB's Alpha PS1 desktop/bookshelf speaker system when it came up. PSB's founder and chief designer, Paul Barton, is one hell of a speaker engineer who has spent a large part of the last 40 years stepping in and out of the anechoic chamber, measurement lab, and listening rooms at the National Research Council's facilities in Ottawa, Canada. Based on my past experiences with PSB speakers, I figured that the new, compact monitors would be good. The question was, just how good?

The PSB Alpha PS1 is a $299 powered speaker system, consisting of a pair of two-way, rear-ported desktop speakers with a 20-watt Class D amplifier built into each one. The driver complement includes a 0.75-inch aluminum dome tweeter mounted above a 3.5-inch polypropylene cone midbass driver. Each compact Alpha PS1 measures 4.5 by 7.88 by 6.88 inches and weighs 4.15 pounds. The gloss-black cabinets have rounded edges and are constructed using ABS with a UV coating. The PS1's rubberized base can be easily replaced with the optional PTB-1 Tilt Base by removing and reinstalling four screws under the speaker. On the back of the left-designated Alpha PS1, you'll find the system volume control, the output jack for the signal/power cable that connects the left PS1 to the right speaker, a pair of stereo RCA input jacks, and a one-eighth-inch AUX stereo input jack. The backside of the left PS1 also includes a mono subwoofer RCA output and a 5V USB power/charging port, while the right PS1 sports a single port for the audio/power umbilical cord that connects it to the left PS1.

The performance of the PSB Alpha PS1 speaker system was absolutely amazing, especially considering its small size and the fact that the pair costs less than $300. Whether I was listening to indie-pop (Marina & the Diamonds) or old-school rock (RUSH), the system had plenty of punch - although, as with all such diminutive speakers, it could obviously be extended by adding a powered sub. The PS1s were utterly dazzling and temptingly addictive when it came to playing a more "refined" recording, such as a Michael Hedges guitar solo. Likewise, the soundstage had extraordinary width and layers with more complex compositions by Roger Waters. The speakers were delightfully nuanced and detailed in the vocals and upper-frequency regions. In fact, the Alpha PS1s quite readily revealed the enhanced presence and smoother but more intricate top end when connected to the headphone output of a HiFiMAN EF2A external USB DAC.

Read about the high points and low points of the PSB Alpha PS1 on Page 2. 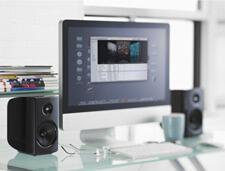 High Points
• The left speaker includes a USB power/charging port on the back.
• PSB offers an optional Alpha Tilt Base (PTB-1, $30), which becomes an integral part of the Alpha PS1 by attaching directly to the bottom of the speaker.
• A subwoofer output makes it easy to extend the Alpha PS1's bass response by adding a powered subwoofer.
• The amplifier for both speakers is built into the left speaker, so there is only one power supply that requires an AC outlet.

Low Points
• The volume control is located on the back of the left speaker, which can be inconvenient if the source you're using doesn't have a volume control.
• As expected with a speaker this compact, the bass response of the Alpha PS1 system falls off below 80 Hz.

Comparison and Competition
Rather than shun the category, top speaker engineers are beginning to take the genre of powered bookshelf/computer speakers seriously - in some cases, as seriously as the more traditional speaker categories. Other small speakers to consider include the Paradigm Shift A2, Aperion Audio Allaire ARIS, Audioengine A5+, and Focal XS Book. For more on these speakers and others like them, please visit Home Theater Review's Bookshelf Speaker page.

Conclusion
Under normal circumstances, the desktop around my computer is blissfully silent. The PSB Alpha PS1 powered speaker, however, has dramatically changed that. At $300, it's a spectacular buy for anyone who is serious about listening to higher-quality music from the computer, although I would definitely recommend spending the additional $30 for the PTB-1 Tilt Base (unless the speakers are going to be placed at ear level or above on a shelf).

You'll automatically be entered in the HTR Sweepstakes, and get the hottest audio deals directly in your inbox.
Subscribe
Connect withD
Login
Connect withD
0 Comments
Inline Feedbacks
View all comments
Author
Darryl Wilkinson
HomeTheaterReview Product Rating
Value:
Performance:
Overall Rating:
When you buy through links on our site, we may earn an affiliate commission. Your support is greatly appreciated!
This is the static ad content. This is just a placeholder for now to get things styled.
Visit Website