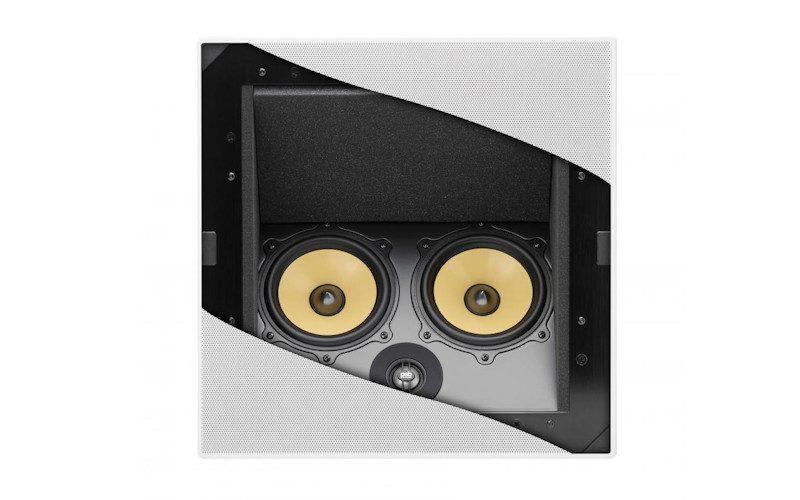 Recently I've had the "pleasure" of installing not one but two seven-channel in-wall surround systems for review purposes. You can read my review of the first system here. The second system hails from the PSB CustomSound architectural speaker line. As many of you probably already know, PSB is part of the Lenbrook family of audio companies, which also includes NAD and Bluesound. The company is known for its numerous speaker offerings that have garnered a multitude of accolades over the years. Based out of Canada, PSB still retains its founding father, Paul Barton, as lead designer.

The notable guiding principle for the PSB CustomSound architectural speaker line is the use of a sealed enclosure, similar to a freestanding speaker but with a few tweaks optimized for installation into a ceiling or wall. While an installed speaker with an enclosure is not a new concept, it's not as common as an open-back design.

The flagship for my installation, and the main focus of this review, is the PSB C-LCR ($799 each), which is an in-ceiling, two-way design with a crossover point of 1,750 Hz. It uses two 5.25-inch bass drivers that employ clay/ceramic cones, reinforced with polypropylene, flanking a one-inch titanium Ferrofluid-cooled dome tweeter. Both the bass drivers and tweeter are borrowed from the PSB Imagine Series of freestanding speakers. In fact, all of the speakers in the CustomSound Series share these same drivers, in various configurations and quantity, which allows for mixing and matching as needed for your installation. Since these drivers are also used in the Imagine Series, those freestanding models will integrate well with the CustomSound Series, if you want a combination of freestanding and in-wall speakers.

The C-LCR enclosure is a square, 13.19-inch box, made from medium density fiberboard (MDF), and it features a concave v-shaped baffle that angles all three drivers toward the listening position (when installed properly, of course). For input connections, gold-plated, spring-loaded binding posts make connecting bare wire simple and fast. The depth of the cabinet is 7.75 inches, taking full advantage of the deeper ceiling cavity in most homes, which provides for an internal volume of 0.36 cubic feet. The manufacturer claims that this volume is optimal for the driver complement.

White magnetic grilles, square in shape, attach to the face frame speaker flange, seamlessly covering the entire enclosure. All of this comes in at a whopping 17.6 pounds, which isn't bad when you consider all three drivers, the crossover, and the enclosure.

PSB also sent me an in-ceiling speaker, the C-SUR ($799 each), that I chose to use for the surround channels--as well as the W-LCR in-wall speaker ($799 each) to perform surround back duties. Related in many ways to the C-LCR, these two models have an MDF enclosure with the same driver components in different configurations. I absolutely must highlight the ingenious C-SUR (shown right). It has the same dimensions as the C-LCR but with two tweeter/bass-driver sets. Each pair possesses its own crossover network, speaker input, and enclosure chamber, allowing this model to act as a single bipole or dipole monitor when the inputs are bridged or as two separate monitors when unbridged. Consider the challenge of finding good mounting locations for seven speakers in most family rooms or great-rooms. In this situation, one C-SUR can act as two speakers, as long as you wire those locations with a four-line speaker cable. Each C-SUR can then act as two speakers: half of the enclosure is for the surround channel, while the other half for the surround back channel. The W-LCR is a typical two-way in-wall speaker, 10.25 inches in width and 15.5 inches in length, with a shallow enclosure measuring 3.75 inches deep. The CustomSound line also includes the W-LCR2 ($999 each), which is a larger, three-way version of the W-LCR that incorporates a four-inch midrange driver. PSB was kind enough to send me this product as well, since I was unsure which models would incorporate into my room structures until I dug into them. In the end, unfortunately, I was unable to use the W-LCR 2 in my installation.

The Hookup
I installed this system in my family room, with three C-LCRs across the front ceiling for the left, center, and right channels. I installed two C-SUR units in the rear of the room in the ceiling for surround duty (wired as dipole speakers, in phase), and I used two W-LCRs for the surround back channels. Installation was a snap once all of the location openings were cut. The dog-ear clamp system, which is common these days, is somewhat larger than others I have seen, with a deep reach capability if needed, but it can also work well with clamping just the drywall (connect the speaker wires first for best performance).

All the speakers were wired up to an Anthem MRX 510 AV receiver, along with a MartinLogan BalancedForced 210 subwoofer. Sources included a DirecTV HD receiver and Sony BDP-BX650 Blu-ray player. I used a MacBook Pro to stream music from Tidal for my main music source. Performance
While watching DirecTV content, I heard a solid front sound image that surprisingly emanated from what seemed like ear level. From a soundstage perspective, I was very impressed. I could also hear a solid midrange with more weight than I had experienced with the MartinLogan in-walls I recently reviewed.

Moving to Blu-ray and my staple Star Wars Episode I pod race scene, it was clear that the C-LCRs created a soundstage that sat low in the room, almost ear level if not exactly ear level. The midrange was superb, with the weight and punch of a true high-end speaker. The surrounds carried that same quality, often causing me to think someone was pounding on my back walls or ceiling from the outside of my home.

Switching it up to the movie Dead Pool on Blu-ray, there are numerous fight scenes with swirling action to test the surround sound, along with the center channel pumping out the fast-paced sarcastic dialogue to challenge the system. The front soundstage appeared to emanate from the display while possessing a sense of depth and width extending beyond the room dimensions. Over an extended period of time, I watched numerous movies on Blu-ray, mostly with DTS-HD Master Audio soundtracks. Coherence was exceptional, which helps with dialogue--something I often struggle with. Sound effects were faithful, providing an unquestionable sense of what was happening and where it was taking place within the scene.

I began critical music listening using Tidal, streaming the track "Songbird" by Fleetwood Mac (Warner Bros). In this setup, only the right and left C-LCRs were used, along with the stellar Martin Logan Balancedforce 210 subwoofer. The tweeters and bass drivers seamlessly portrayed realism by projecting a sense of forwardness that was just right. Detail in percussion had an authenticity that was dramatic. I also played this same track with the C-LCR running full range, without the subwoofer, with unexpected results: while I could tell there was less low-frequency energy, I realized I could live with these two monitors playing full range, as I would with some of my favorite bookshelf or stand-mounted monitors. Of course, since I have a stunning subwoofer already in the room and connected, there is no justifiable reason to do so. Regardless, the PSB in-ceiling speakers played the frequency range for which they were intended with unbelievable musicality, resolution, and believability.

I played some tracks from a newer artist that I've developed a liking to: Alabama Shakes. Their song "Don't Wanna Fight" (ATO) has a compelling bass line, as well as an interesting vocal character and quality. The C-LCRs handled it with ease, revealing the detail in the frequencies over 80 Hz. Vocals were clear and natural with no harshness. Imaging was excellent, with the same qualities I had experienced earlier in way of depth and width. I continued to play various tracks from old and new favorites, and the C-LCRs performed well over an assortment of genres.

Another observation, and consequence, of the PSB CustomSound design was that there was less sound transmission to the second level of my home, versus open-back speakers.

The Downside
From a performance perspective, there is little if anything for me to be critical of, as I believe the PSB CustomSound system to be sensational in so many ways. From a pragmatic perspective, the enclosure could cause issue during installation if you have any sort of plumbing or venting impeding into your speaker locations. It may seem like this would apply to any installed speaker, and that's true to a point; however, the PSB enclosure impedes a bit more than an open-back design when trying to place it in the cavity. I had a few close calls during my installation.

Additionally, I do wish that the speaker grilles had a slightly lower profile. Their profile is a tad thicker, with no sloping transition into the ceiling. I estimate the thickness to be just less than a quarter of an inch. Admittedly, after a while you stop looking at your ceiling and tend to forget about it, so I don't believe this should be a deal breaker.

Comparison and Competition
I compared the PSBs directly with the MartinLogan Vanquish in-ceiling speakers ($1,399 each), which were recently installed in the same locations. I can honestly say it is a matter of preference. Both systems are exceptional. I lean toward the PSBs, due to the more substantial midrange that the enclosure provides. I also noticed a difference in the character of the upper frequencies between the two, but again it is a matter of preference. The Vanquish speaker uses the MartinLogan Folded Motion XT ribbon tweeter, while PSB uses a more traditional dome tweeter, albeit a titanium one.

The Triad Silver/6 monitor ($1,450 each) is very similar in design to the PSB C-LCR, as it too has a back box. I had the opportunity to audition this speaker, with impressive results. It was some time ago, though, so it's difficult to compare the two directly.

The Sonance LCR1S ($1,250 each) is another option that integrates drivers into the enclosure and may be a consideration.

Conclusion
The PSB C-LCR is an impressive in-ceiling speaker that sounds like a high-end stand-mount monitor. These speakers image spectacularly, creating an almost ear-level soundstage. Vocals and instrumentation are reproduced with an organic quality that I enjoyed. Midrange presence was a standout, emanating a truthfulness not often found in an in-ceiling speaker.

Mating the C-LCRs with the in-ceiling C-SURs and in-wall W-LCRs created a superb seven-channel home theater package. The integrated enclosure reduced sound transmission into neighboring rooms, which is an important ancillary benefit. If you're looking for a concealed installed speaker system, I suggest you give PSB's CustomSound lineup a thorough consideration.