Brian Kahn auditions the new 5GHz Wireless Audio System from Questyle Audio, which is designed to wirelessly transmit audio signals up to 24/192 from source to speaker. 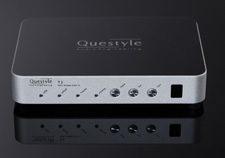 Last year I got a call from industry veteran Bruce Ball, who excitedly told me about a new company he was working with, Questyle Audio. Questyle makes a variety of headphone-related products, but the product that we discussed the most was the 5GHz Wireless Audio System reviewed here, which allows you to wirelessly transmit high-resolution audio signals from your source device to remote speakers around the room or home. The system includes three different components that can be assembled to meet the needs of different users. Each system requires the T2 Wireless Transmitter and either the R100 or R200 amplifier. The R100 is a 50-watt-per-channel stereo amplifier, while the R200 is a 200-watt-per-channel mono block. Each component costs $1,000; accordingly, a system with a single, stereo amplifier would run $2,000, while the mono-block system I reviewed, using two R200s, runs $3,000.

The T2 transmitter is small, measuring about 6.25 by 4.5 by one inch, with a lightweight chassis made with matte-silver aluminum walls and attractive glossy-black, synthetic top and bottom plates. The end result is an attractive package. The front panel has a row of LED indicators showing the selected input, as well as three circular buttons for volume up/down and input selection and an IR window for the remote. The rear panel has single-ended analog inputs, as well as USB, coaxial, and optical digital inputs. A small, simple remote control allows for volume control (including muting) and selection of inputs. The T2 houses an analog-to-digital converter (for the analog inputs) and a 5GHz transmitter, which will pair with up to eight receivers. The system can transmit signals up to 24-bit/192-kHz (DSD files can be accepted by the transmitter but are converted for transmission). Questyle touts an FIFO cache and digital PL technology as being capable of greatly reducing jitter. The system transmits in the 5.2-GHz/5.8-GHz band, which is said to reduce interference found in the 2.4-GHz range used by other systems.

The R100 and R200 amplifiers both contain a wireless receiver, DAC, and ICEpower-based Class D amplifier. The amplifier chassis is diminutive, measuring approximately 4.5 inches wide, 9.5 deep, and two high. Like the T2 transmitter, the amplifiers have a well-finished, matte-silver aluminum chassis. Instead of a black top plate, the faceplate is a silk-screened glossy black synthetic material with a small LED status light and IR remote receiver. The back panel has a power switch, an IEC power cord socket, and five-way speaker binding posts. Questyle is proud of its implementation of the ICEpower modules with independent power supplies and high-end components from Nichicon and Wima. The DAC is based on the Wolfson 8740 with a proprietary clock system to improve performance. For systems needing more than the 200 watts provided by one R200 mono block, multiple sets of R200s can be utilized for bi-amping or tri-amping.

I used the Questyle Wireless Audio System in different setups. Most of my listening to this system was with a McIntosh MCD-500 SACD/CD player as the source. I alternated between using the analog and coaxial inputs on the T2. The analog inputs convert the signal to digital but did a fairly good job of preserving the midrange warmth found in the McIntosh. The coaxial input provided a bit more detail, which was noticeable when I listened closely.

I also used the T2's USB input with both my MacBook Air and a Windows-based tablet. The USB cable I used was Straight Wire's new USBF cable. I was able to play music files up to 24-bit/192-kHz from my MacBook, but not DSD files. With the Windows tablet, I was able to play DSD files in addition to everything I could play through my Mac.

Utilizing the analog input of the T2 forces the signal to go through the longest signal path: conversion to digital audio, wireless transmission, conversion back to analog, and amplification. I played a few familiar discs through both the analog and coaxial inputs of the T2. Norah Jones' vocals are extremely familiar to me, as I have heard them numerous times through every system in my house. Listening to Norah Jones's "Come Away With Me" from the album of the same name (CD, Blue Note) through the T2's analog inputs, the warmth of the McIntosh's analog output was easy to hear through my MartinLogan Summits. Switching to the T2's coaxial input, I played the track again, and the difference was quite noticeable. Through the digital input, the Questyle system was a bit more detailed, which may be a result of skipping the analog-to-digital conversion process. Using the digital inputs, the Questyle amplifiers were slightly thinner than my usual Halcro MC Series amplifier, but they shared many sonic similarities. Both amplifiers are fast and detailed, leaning more toward analytical than lush or warm.

I repeated this comparison with numerous tracks from Mark Ronson, Maroon 5, and others with the same results. Later in my review, I connected my Oppo BDP-95 instead of the McIntosh, and I found the differences between the analog and digital inputs to be greatly diminished. I suspect this is because the sonic character of the Oppo's analog outputs is much more similar to the Questyle's DACs than the McIntosh's. High Points
• The Questyle 5GHz Wireless Audio System allows the transmission of high resolution (up to 24/192) across a room or house, without having to spend lots of money on interconnects or labor.
• The R200 mono-block amplifiers are capable of driving difficult speakers like the B&W 800 Diamonds.
• The sound quality of the system is extremely good.
• The Questyle system is scalable, allowing you to add channels or power where needed.

Low Points
• Listeners can control the transmitter by aiming the remote at the amplifier, but it would be nice if the transmitter had an IR relay so that listeners in another room could control source units placed next to the transmitter.
• Through the analog inputs, the Questyle system preserves much of the character of the source outputs, but there is a slight loss of transparency.

Comparison and Competition
There aren't many direct competitors to the Questyle Wireless Audio System. There are plenty of wireless mid-fi and subwoofer systems, but very little win the way of wireless hi-fi. A rapidly growing number of systems use Apple AirPlay or DTS Play-Fi, which both will transmit up to CD resolution. These systems can offer a dizzying array of options at a wide range of price points, but I am not aware of any that reach the performance level of the Questyle system.

Conclusion
The Questyle 5GHz Wireless Audio System works. I was able to transmit audio throughout my two-story house without degradation. As mentioned above, there was one room that contained a lot of active electronics, including a 5-GHz Wi-Fi router that caused some interference; however, I was able to get a solid connection by repositioning the receivers by a couple of feet.

The Questyle system can preserve the sonic character of a favorite source by using the analog inputs, or maximum detail can be obtained by using the digital inputs. The sonic character of the Wireless Audio System tends toward the lean side of neutral, with fast transients and lots of detail. With both the MartinLogan and the B&W speakers, the Questyle system was able to produce accurate and engaging music with a good sense of rhythm. The main areas where my reference amplifiers (McIntosh MC-501s for the MartinLogans and a Halcro DM-38 for the B&Ws) pulled ahead of the Questyle system were in the amount of texture and detail present in the reference amplifiers. This was most easily noticed in the upper midrange and treble, such as violin strings (which had more body), and the richness of a live performance through the reference amplifiers. Notably, the Questyle system was able to control the difficult-to-drive B&W 800 Diamonds in a dynamic manner that many amplifiers have had difficulty with.

In summary, the Questyle 5GHz Wireless Audio System allows for the wireless transmission of high-resolution music in areas where running cables is impractical. The system's sound quality exceeds that of any other wireless system that I have heard to date, and the ability to choose between stereo and mono amplifiers, as well as to add additional amplifiers for power-hungry speakers or even other sets of speakers in different locations, makes this system versatile, as well.

The Questyle system's performance is impressive regardless of price. But, when you consider what it delivers for the price, it is even more impressive.