I recently evaluated the Questyle CMA800R current mode headphone amplifier, and Bruce Ball of Questyle North America also provided the companion reference DAC, the CAS192D ($1,999), as a source for the amplifier. The CAS192D is a pure DAC in that... 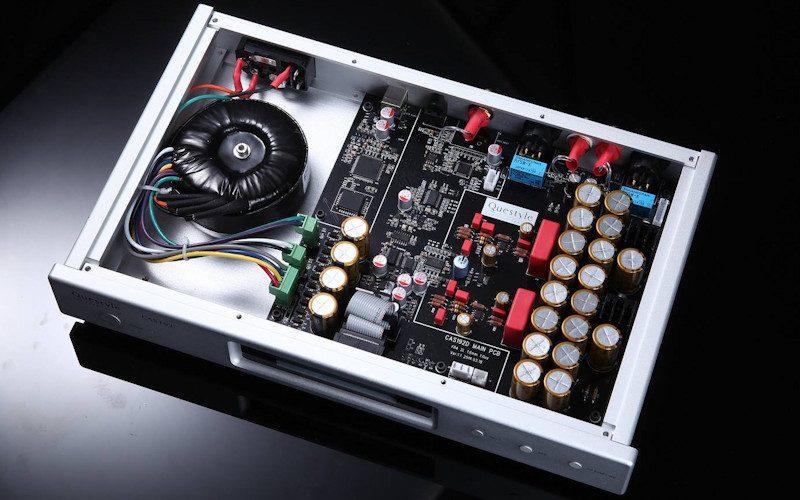 Like its predecessor, the CAS192D decodes PCM files up to 24-bit/192-kHz, while the "D" in the new model name stands for True DSD (also known as Native DSD). According to Questyle, the CAS192D is the world's first DAC designed to accept the DSD bitstream intact directly from your computer (via the USB port), bypassing your computer's audio processing and digital volume control, as well as the Questyle CAS192D's digital filters. The much more common method is the DoP (DSD over PCM) standard invented by high-end audio electronics manufacturer dCS and used by many other companies. Questyle says that handling DSD natively is less prone to errors than the DoP standard. To paraphrase Questyle, with DoP, the original DSD bitstream is broken up into 16-bit increments, packed into 24-bit PCM words (33 percent increase in bandwidth overhead), then unpacked at the processor into a buffer to reassemble the DSD bitstream and send it to the DSD DAC, all in real time. All of this requires that a significant amount of data processing be carried out precisely, increasing the chance for latency or data loss errors to occur, negatively affecting sound quality.

The CAS192D does not support MQA full decoding (hardware), but very few DACs do yet. As of this writing, it also does not have MQA rendering (software) onboard, either. Thanks to TIDAL HiFi adding the MQA rendering software to its desktop app, I was still able to listen to MQA files through the Questyle system, albeit limited to 88.2-kHz or 96-kHz resolution.

The stellar build quality of the CAS192D matches that of the highly resolving CMA800R amplifier, with attention paid to every little detail both inside and out with no compromises to be found. An illustration of Questyle's attention to quality control is the fact that Questyle tests every unit prior to shipment and includes the signed test report results with the unit. The CAS192D has the same meticulously CNC-machined aluminum casework and identical dimensions (approximately 13 inches by 11.8 inches by 2.2 inches) as the CMA800R. And, like the CMA800R amp, the CAS192R DAC has an impressively low noise floor, with distortion (THD+N) rated at less than 0.005 percent and a signal-to-noise ratio (SNR) of 116 dB. The CAS192D looks right at home when stacked with the CMA800R amplifier, but the DAC is equally at home with a traditional full-size audio system, when paired with a computer as a music server or a high-end CD transport. In fact, there is a remote control included with the unit that makes operating the CAS192R in this way much easier. I tested the remote, and it worked flawlessly, but I rarely used it after my initial testing--since the CAS192D was always within arm's reach on my desktop.

Inside the CAS192D, the power supply section has been upgraded from the CAS192 with a customized Plitron toroidal transformer, Schottky rectifiers, 22 Nichicon 2200 μF FG capacitors, and 22 groups of individual power regulators, all to ensure clean, stable power. The CAS192D is built around Wolfson Micro's flagship WM8741 DAC chipset, with four levels of digital filter and power regulation. While the type of DAC chip is important, the overall implementation is more important. Questyle uses a 3X (triple) clock structure with three separate ultra-low phase noise clocks for USB, as well as multiples of 44.1 kHz and multiples of 48 kHz to avoid timing errors. There's also a special Questyle-designed chip next to the USB receiver that routes PCM and DSD bitstreams along different paths to preserve the DSD bitstream in its native format.

On the back panel from left to right, you'll find a set of balanced (XLR) and unbalanced (RCA) analog outputs. I used WireWorld's Platinum Eclipse 7 Balanced (XLR) cables to connect the CAS192D DAC to either one (stereo mode) or two (dual mono mode) CMA800R amplifiers. Next there are SPDIF, optical, and USB Type B digital inputs, all supporting 24-bit/192-kHz, with the asynchronous USB input also supporting True DSD. I used a WireWorld Platinum Starlight 7 USB 2.0 cable to connect my iMac desktop computer to the CAS192D DAC. Finally, there is an AC power socket, a power fuse panel, and a power on/off switch on the far right.

Moving around to the front faceplate, from left to right, you'll find the power on/standby button, an AC power indicator light, and an OLED status display screen. The OLED display indicates the input mode, original sampling rate, upsampled rate, and PCM version digital filter mode. There are five selectable IIR (Infinite Impulse Response) and FIR (Finite Impulse Response) digital filters available when playing PCM files. Questyle has made some improvements to the internal filters accompanying the Wolfson chipset to improve performance. There is actually a different choice of filters for music in 44.1 kHz or 48 kHz than for music of higher resolution. When in True DSD mode, there is no digital filter applied, preserving the native signal. To the right of the display, there are three buttons to select between inputs, the PCM mode digital filter applied, and the on/off switchable upsampling applied in PCM mode, respectively.

To set up the system for True DSD playback evaluation, I installed the Windows 7 operating system (OS) on my iMac using Boot Camp. True DSD will work with Windows 7, 8, or 10, but not the Mac OS. The Mac OS doesn't support DSD bitstreaming over ASIO (Audio Stream Input/Output, a computer sound card driver protocol for digital audio). I also installed the latest Windows version of JRiver Media Center software, since I'd be playing DSD files in the Windows environment. Other players, such as HQPlayer and foobar2000, can also pass the DSD bitstream natively, so the choice of music player comes down to a matter of individual preference.

How did the CAS192D DAC perform? Mated with the companion CMA800R amplifier and my Sennheiser HD800 phones, the DAC operated flawlessly. Early in the review process, I spent quite a bit of time playing with the five different filter choices. The filter options can be cycled through fairly quickly, making comparisons easy. While differences were subtle, I found that I preferred the IIR Apodizing filter (YMMV). The CAS192D remembers your last filter choice for each PCM file resolution, too. I also experimented with comparisons between the normal sampling rate and upsampling. I really didn't notice any difference with upsampling engaged, so I left it off for the majority of my listening.

The presentation of the Questyle system was just sublime. Of particular note were the speed and transparency of the sound. Attack transients and transient decay were more distinct, providing greater soundstage clarity, with more air between instruments and voices. And there was bit more width and depth to that soundstage than through lesser gear. The presentation had a greater sense of realism, closer to that of live music. These attributes were present regardless of the genre or file type, be it PCM, DSD, or even the recently available TIDAL Masters (software-rendered MQA files). While I don't have very many DSD files, the files I do own have never sounded better than with the True DSD implementation of the CAS192D DAC.

High Points
• The CAS192D DAC supports True DSD rather than the more typical DSD over DoP method.
• The various digital filters available enable a certain amount of shaping of the sound to individual taste.
• The high-end component design and the stellar build quality make the CAS192D a fitting companion to the CMA800R reference amplifier.

Low Points
• Getting True DSD working with a Mac computer requires installation of the Windows OS and a compatible music player.
• There's no MQA full decoding or rendering capability on board.

Comparison & Competition
Other DACs of similar build quality and price range that come to mind are the Schiit Audio Yggdrasil Multi-bit DAC ($2,299) and the Bryston BDA-2 External DAC ($2,395). While these are both great DACs for PCM files, neither will decode DSD either natively or over DoP. If DSD decoding is important to you, then the Questyle CAS192D has the edge.

Conclusion
The Questyle CAS192D is a true reference-caliber DAC on its own, but it also forms a perfect partnership with Questyle's CMA800R reference amplifier. If you are looking to put together a reference personal audio system, the CAS192D is certainly a terrific choice for handling your processing needs. Once you get past a bit of initial setup for DSD, you'll be rewarded with music that is an honest representation of the original recording. The Questyle CAS192D DAC's build quality, fully balanced design, and excellent implementation of both DSD and PCM decoding make it very hard to beat without spending considerably more.

You'll automatically be entered in the HTR Sweepstakes, and get the hottest audio deals directly in your inbox.
Author
Bob Barrett
HomeTheaterReview Product Rating
Value:
Performance:
Overall Rating:
When you buy through links on our site, we may earn an affiliate commission. Your support is greatly appreciated!
This is the static ad content. This is just a placeholder for now to get things styled.
Visit Website