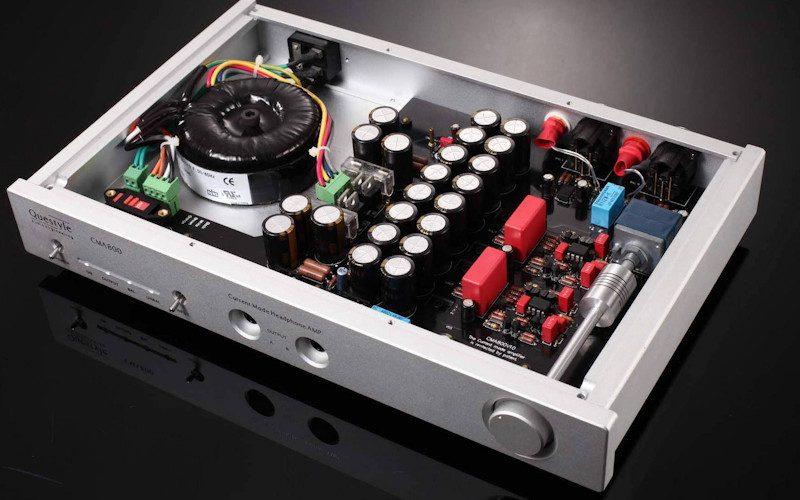 Questyle Audio describes the CMA800i as an integrated DAC, headphone amplifier, and preamplifier. I have no doubt that it can do each of these tasks, but I suspect that most people that buy the CMA800i will use it as a...

The $2,499 CMA800i is relatively petite for a home audio component, measuring about 13 by 8 by 2.5 inches, with a lightweight chassis made with thick aluminum panels finished in matted silver. The front panel is slightly retro in design, with silver toggle switches for power, input selection, and the ability to select either a preamplifier or headphone amplifier mode. Small LEDs indicate input, signal type, and digital filter selection. A pair of quarter-inch headphone outputs, an IR window, and a volume knob make the CMA800i easy to use, whether it is standing alone or in a stack.

The CMA800i accepts digital signals via USB or SPDIF. The USB input is asynchronous with Questyle's proprietary triple clocks and accepts True DSD (as opposed to DoP), as well as signals up to 24-bit/192-kHz. The SPDIF input does not accept DSD but does accept signals up to 24-bit/192-kHz. The CMA800i uses Questyle's proprietary filters to address pre-ringing on PCM files. Even though Questyle uses a lot of proprietary chips, it also uses the Wolfson WM8741 DAC chipset, which is designer Jason Wang's favorite DAC chipset. The analog side of the CMA800i uses Class A amplification (favored by many purists) but breaks away from the norm by utilizing Current Mode amplification rather than voltage amplification. Current Mode amplification allows for a much faster modulation of the signal, said to be about 100 times faster than traditional voltage modulation. Benefits include a higher slew rate and greater bandwidth while reducing distortion and noise. More information about Current Mode amplification and Questyle's proprietary DAC technology is available on their website. The whole unit is powered by a beefy power supply with a large Plitron Toroidal transformer.

Questyle collaborated with JRiver for DSD playback, and JRiver's Media Center running on a Windows platform must be used to play DSD files on the CMA800i. With Media Center loaded on my Windows tablet, which was connected to the CMA800i via Straight Wire's relatively new USBF cable, I began my listening. I used a variety of headphones, including Audeze LCD-XCs, Sennheiser HD-700s, Monster DNA Pro 2.0s, and the RBH EP2 in-ear monitors.

I listened to a 24-bit/48-kHz version of Michael Jackson's "Dirty Diana" from the album Bad (Epic), which I downloaded from HDTracks. The track has strong, tight bass--which the Questyle was able to reproduce through all of the headphones with ease while making it easier to hear the differences between them.

Paul Simon's "Diamonds on the Soles of Her Shoes" from the Graceland album (25th Anniversary Edition, 24-bit/96-kHz download from HDTracks) had natural and lifelike vocals that were just on the warm side of neutral. The higher frequencies of the cymbals and strings were extended, especially through the Audeze LCD-XCs, and retained some of the warmth I heard in the midrange area--making for a presentation that was more lush than analytical.

I could hear the slight warmth in the midrange and highs with DSD files, as well. I listened to several DSD files from Dire Strait's Brothers in Arms album (Warner Brothers) and Stan Getz's "Girl from Ipanema" from the album Getz and Gilberto (Verve Records). "Girl from Ipanema" sounded very lush, with multiple delicate layers that I kept getting drawn into every time I played the track. The delicate details remained present when I listened to "Your Latest Trick" from Brothers in Arms and were especially notable with the saxophone.

Lastly, the Questyle has an extremely low noise floor, which helps boost its overall dynamic range. I listened to Tchaikovsky's 1812 Overture (Telarc CD converted to FLAC) and found it to be extremely dynamic and detailed. The background was extremely quiet even through the sensitive RBH in-ear monitors and the Audeze headphones with their extended high-frequency capabilities, which tend to reveal less-than-stellar noise floors.

Low Points
• There is no front-panel display to show audio file information, such as track name, file type, etc.
• The DSD implementation is limited to JRiver's Media Center on a Windows-based machine and does not support double-rate DSD.
• The CMA800i has limited connectivity options, especially if you are considering utilizing the CMA800i as a preamplifier for your non-headphone-based system.

Competition and Comparison
I recently attended an open house hosted by Burson Audio, whose Conductor Virtuoso with the ESS 9018 DAC is $1,995 and has a similar feature set. The Marantz HD-DAC1 at $799 will handle both single- and double-rate DSD and has an LCD display panel. Both of these units only have one headphone output as compared to Questyle's two headphone outputs. Benchmark's DAC2 HGC at $1,995 not only offers dual headphone outputs, it also has balanced outputs and more inputs to increase its flexibility.

Conclusion
The CMA800i is an excellent integrated headphone amplifier and DAC. I have spent a limited amount of time with the other Questyle products, and I think that the CMA800i may hold the sweet spot in their lineup. The CMA800i was noticeably more dynamic and had blacker backgrounds when compared with the Q192 DAC/headphone amp (at the bottom end of the Questyle lineup) and was much closer in performance to the top-of-the-line Questyle stack with a separate DAC and mono-block headphone amplifier.

The Class A sonic characteristics of the CMA800i coupled with extremely good detail and extended highs will show off well-designed headphones. I was able to obtain detailed and well-formed sonic images while listening through the CMA800i. While the soundstages produced by the Audeze and Sennheiser headphones differed from each other, the imaging produced by each headphone remained consistent and well formed, with plenty of detail to hear the spacing among the instruments on orchestral pieces or a well-placed vocalist in the smaller-scale pieces.

The Questyle CMA800i is highly recommended for use with audiophile headphones. The output section does a good job controlling headphones with reputations of being hard to drive. There was not a single set of headphones or in-ear monitors that I felt were not a good match with the Questyle. I found myself engaged in long listening sessions, going back and forth between headphones. At first, it was to hear the differences between them, but it soon evolved into listening sessions purely for pleasure.

You'll automatically be entered in the HTR Sweepstakes, and get the hottest audio deals directly in your inbox.
Subscribe
Connect withD
Login
Connect withD
0 Comments
Inline Feedbacks
View all comments
Author
Brian Kahn
HomeTheaterReview Product Rating
Value:
Performance:
Overall Rating:
When you buy through links on our site, we may earn an affiliate commission. Your support is greatly appreciated!
This is the static ad content. This is just a placeholder for now to get things styled.
Visit Website

Sony Bravia X90J Overview - Is The Picture Quality Worth The Price?