Bob Barrett auditions the CMA800R headphone amplifier from Questyle Audio. This headphone amp uses Questyle's patented current mode amplification, and it can be run individually in stereo mode or as a bridged pair in mono full balanced mode. 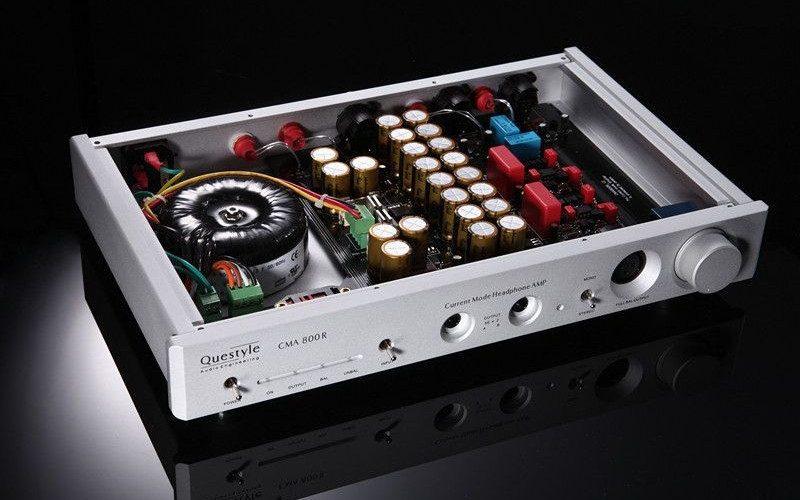 While many companies have jumped on the personal audio bandwagon with "me too" products, a few have risen above the fray with products that truly stand out for their engineering innovation, attention to design details, and superior sound quality. Questyle is one such company, offering innovative products at several price points. For the past several months, I've had the opportunity to conduct an extended audition of Questyle's reference system of personal audio separates--which consisted of two CMA800R headphone stereo amplifiers and the companion CAS192D model DAC. This review focuses on the CMA800R amplifier ($1,999), and a review of the CAS192D will publish separately.

The first question you might ask is, "Why two stereo amplifiers?" Well, one of the unique features of the CMA800R amp is that it can either be run individually as a stereo amp or, when paired with a second amp, bridged in mono full balanced mode. Questyle claims to be the world's first with this capability in a headphone amp. Using one amp in stereo mode only requires a headphone cable with the standard quarter-inch headphone jack, but listening to two amps in mono full balanced mode requires something different: a headphone cable terminated with dual three-pin XLR connectors. So I contacted WireWorld and got two of its Nano-Platinum Eclipse reference cables. One would be terminated with the two requisite XLRs and the other with a single standard quarter-inch jack, removing cable differences as a variable in the evaluation.

I chose to use my reference Sennheiser HD800 headphones for this review because I was told by the folks at Questyle that CEO and founder Wang Fengshuo (Jason Wang) had used the HD800 while designing this new amplifier. I spent a lot of time listening to the CMA800R amplifier (both in stereo and mono full balanced modes) together with the CAS192D DAC as a system.

The CMA800R has some unique attributes that elevate it to reference status. First is the already-mentioned ability to operate in either stereo mode (single amplifier) or in mono full balanced mode when bridging two amplifiers in a dual mono configuration. The benefits of running in mono full balanced mode include output power that is four times that of a single stereo CMA800R (710 mW versus 180 mW), a reduction in distortion (THD+N) from an already low 0.00038 percent to an incredible 0.00026 percent, an improvement in signal-to-noise ratio (SNR) from 114 dB to 118 dB, separate power supplies for each channel, and improved channel separation.

Second, the CMA800R employs Questyle's patented current mode amplification instead of traditional voltage mode amplification (more on this below). Third, the beautifully milled enclosure features a bottom chassis and upper cover that are machined from 10mm-thick aluminum in a "mutual bit" structural design. The design's purpose is to provide control of mechanical vibration, heat stability, and shielding from RFI/EMI radiation.

Fourth, under the hood of the CMA800R the components are all very high-end. Among these are a customized Plitron toroidal transformer, 22 Nichicon audio specific capacitors providing clean power, and a Schottky rectifier to reduce noise. The enclosure measures approximately 13 inches wide by 11.8 inches deep by 2.2 inches high, so it's small enough to fit neatly on most desktops but large enough to provide plenty of connection options. Finally, the CMA800R amplifier is meticulously manufactured in the same Foxconn factory that manufactures Apple's iPhone.

So, what is current mode amplification, and what are the benefits? Well, rather than amplifying the voltage input signal like traditional amplifiers, the CMA800R first converts the voltage input signal to current and then amplifies the signal in the current domain operating in Pure Class A. The amplified current mode signal is then converted back to voltage just prior to the output stage. Because the current signal is propagated hundreds of times faster, current mode amplification offers several benefits, including wider bandwidth and ultra-low distortion levels (TIMD, or Transient Intermodulation Distortion, is all but eliminated).

The back panel of the CMA800R has one set of stereo balanced and one set of stereo unbalanced inputs, as well as a full balanced mono input. There is also a set of single-ended preamp outputs, a fuse panel, and an AC power socket. On the front panel, there is a power on/off button and a series of four status indicator lights, including power, output status, balanced input, and unbalanced input. To the right of the indicator lights is an input switch to select between the balanced and unbalanced stereo inputs. There are also two quarter-inch stereo headphone jacks and one three-pin XLR mono headphone jack, along with a toggle switch to select between them. Again, in mono mode, two CMA800R amplifiers are needed to separately drive the right and left headphone channels. To the far right, there is a volume control.

To connect the CAS192D model DAC to the amplifiers, I used WireWorld reference Platinum Eclipse 7 XLR interconnects. I connected my computer (running JRiver Media Center and TIDAL HiFi for streaming) to the DAC using a WireWorld Platinum Starlight 7 USB 2.0 cable. For the first month, I listened using a single CMA800R amplifier in stereo mode. After that, I reconfigured the system to listen to the pair of amps in dual mono mode. In dual mono mode, there was so much reserve power that, even when cranking it up, I never got the volume controls to 10 o'clock on the dial.

Normally the differences between amplifiers are subtle at best, making reviews a real challenge. However, I didn't find that to be the case with the CMA800R. Compared with another brand's $500 amp I had on hand, the CMA800R consistently dug MUCH deeper into recordings, with its increased dynamics bringing previously unheard details to the surface. And the ambience of the acoustic space was consistently reproduced with greater realism. For example, on London Grammar's ballad "Rooting for You" (16-bit/44.1-kHz, TIDAL HiFi), there was an immediate sense of the large cavernous recording space with the first notes of Hannah Reid's singing. The amp revealed a lot of low-level details in the recording, such as Dan Rothman's fingertip friction sounds on his guitar strings--not to the point of being analytical but rather very organic and musical. The CMA800R is highly transparent, making it seem as if you're actually in the recording space, bringing a greater sense of realism. It proved to be such a dynamic amplifier that it appeared effortless.

With rock music like Icelandic rock band Kaleo's "Way Down We Go" from their album A/B (16-bit/88.2-kHz, TIDAL MQA Master), the bass was tight and with greater weight than I'm used to through the HD800 cans. For those who are of the opinion that the HD800 phones have thinness to their bass, one listen with the CMA800R will prove otherwise. The Sennheiser HD800 phones have never sounded as balanced as they did with the CMA800R, and I found this to be true with every music genre I listened to, including very dynamic classical and bass-heavy hip hop.

While the Sennheiser HD800 was its soul mate, the CMA800R also paired very well with the other high-end headphones I tried. These included the Audeze LCD-3, Focal Utopia, and Mr. Speakers Ether Flow. I suspect it would pair well with many other reference-quality headphones, too.

High Points
• The Questyle CMA800R is a very dynamic, highly resolving amplifier, thanks to its current mode amplification topology.
• The CMA800R is an excellent choice to drive the Sennheiser HD800 and many other high-impedance reference headphones.
• The CMA800R amp can be run either individually in stereo mode or as a bridged pair in mono full balanced mode.

Low Points
• In dual mono configuration, each channel's volume must be controlled independently.

Comparison & Competition
If you're looking for a reference headphone amplifier that is similar in technology and sonic presentation for comparison, you need to look at more expensive products, such as the Bakoon HPA-21 ($2,995), the Cavalli Audio Liquid Gold ($3,999), or the esoteric Woo Audio 234Mono ($16,000). That's the space that the Questyle CMA800R plays in, making it a very good value.

You'll automatically be entered in the HTR Sweepstakes, and get the hottest audio deals directly in your inbox.
Author
Bob Barrett
HomeTheaterReview Product Rating
Value:
Performance:
Overall Rating:
When you buy through links on our site, we may earn an affiliate commission. Your support is greatly appreciated!