Martin Scorsese and Robert De Niro both won enormous critical acclaim with this black-and-white drama about the life of boxer Jake La Motta. Raging Bull, which was also famous for its intense portrait of professional fights, is coming to Blu-ray. 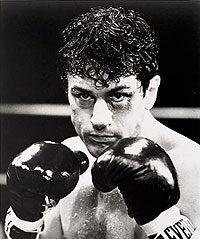 Experience a boxer's emotional journey, as the violence and temper that made him a champion inside the ring destroy his life outside of it, when Raging Bull rings onto visually stunning Blu-ray Disc (BD) for the first time on February 10 from MGM Home Entertainment.  Raging Bull garnered eight Academy Award nominations, taking home Oscars for Best Actor in a Leading Role (DeNiro) and Best Film Editing (Thelma Schoonmaker). Nominated for Best Cinematography as well, the Blu-ray disc presents Michael Chapman's beautiful black and white photography as never before. Claiming the number one ranking spot on AFI's "Top Ten Sports Films of All Time," director Martin Scorsese (Taxi Driver, Goodfellas) recounts the gritty and emotionally unsettling career and personal life of tenacious boxer Jake LaMotta.  Robert DeNiro (The Godfather II, Meet the Parents) delivers a knockout performance, portraying the rise and fall of the middleweight boxer, including his prizefighting victories of the 1940s, his dealings with the mob and the destruction of his marriage, his family and himself.  Co-starring, are Oscar winner* Joe Pesci (My Cousin Vinny, Once Upon a Time In America,), as LaMotta's manager and brother and Cathy Moriarty (Casper, Analyze That), as LaMotta's abused and alienated wife.

The Raging Bull Blu-ray Disc includes director, cast and crew commentary, making-of documentaries, and much more.  It will be available for the suggested retail price of $34.99 U.S. / $37.99 Canada, pre-book is January 14.

Notorious - The Story of Rapper Biggie Smalls Coming To Blu-ray