Terry London explores the $2,595 Nighthawk tube-based integrated amplifier from Raven Audio and comes away highly impressed, with both the product's build quality and its performance. 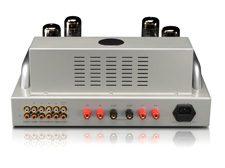 Just over a year ago, I had the great pleasure of reviewing the Shadow Reference Preamplifier from Raven Audio. Based on that experience, I was curious if CEO/Owner Dave Thomson and his team at Raven Audio could bring the superlative performance of the company's reference line to its entry-level gear. Arrangements were made for me to review the Nighthawk tube integrated amplifier, which retails for $2,595.

By the looks, materials, and build quality of the Nighthawk, one would never guess it was considered the company's entry-level piece. The chassis is manufactured out of 14-gauge carbon steel with an aircraft-grade aluminum faceplate and an aluminum small-signal tube plate on the top. On the sides of the top plate reside two handles made of schedule-20 carbon steel. The front knobs are machined from aircraft-grade aluminum. The folded carbon steel chassis gets a high-quality primer and several coats of high-grade automotive gray enamel that's baked and clear-coated several times with aircraft-grade sealant. The Nighthawk measures 15.5 inches long by 14 inches deep by 6.5 inches high and weighs in at 35 pounds.

On the front plate, next to the Raven Audio emblem, are three knobs for power, volume, and input selection. On the back is where you find the IEC power input, two sets of either four-ohm or eight-ohm speaker terminals, five sets of RCA inputs, and one RCA output to power a subwoofer. On the back of the top plate is where the large transformers are housed in a thick enclosure. The three sets of input tubes are positioned in the middle of the top plate, flanked by the two pairs of power tubes. The input tubes are two pairs of 12AT7 used as phase inverter/drivers and one pair of 12AU7 for first-stage amplification. The Nighthawk uses two pairs of 6L6GC power tubes to generate at least 20 watts into either four or eight ohms. This integrated amplifier, like all the Raven Audio tube gear, is auto-biasing. Another special feature, particularly considering this is the least expensive piece in Raven Audio's catalog, is that the Nighthawk is shipped with all NOS tubes to ensure the best performance possible. The Nighthawk's remote control is built out of thick aluminum and only controls volume.

I've never auditioned a tube-based amplifier that uses the 6L6GC power tube, and I found it to be quite different in its sonic signature than other power tubes (like the 88-34-90-120-150) that are used most often in today's market. The power tube that the 6L6GC most reminded me of is the classic 211 power tube. Like the 211 tube, the 6L6GC is a fast, powerful, and transparent tube. It gives you all the details and dynamics/speed of the music and still provides great tone, timbres, and color for both voices and instruments. I find the 211 and 6L6GC to be much more realistic-sounding in both tone and color than the above-stated power tubes.

The Nighthawk was able to effortlessly drive, to any volume level, the many speakers with which I auditioned it, including the Lawrence Audio Cello and Mandolin, Aerial Acoustics 6T, KEF 50, and Wharfedale Jade 3 (review forthcoming).

A selection that would demonstrate some of the sonic virtues of the Nighthawk was Janet Jackson's album Rhythm Nation (A&M Records). The Nighthawk drove this music with great speed, and all the macro-dynamics of the percussion instruments popped into my room. This album also offers a large soundstage with special effects crossing over from left to right on different tracks. The Nighthawk reproduced all of this, and the soundstage completely filled my listening room from side to side.

For me, one of the most important aspects in the reproduction of music is how a piece of gear renders the timbres/tonality and color of different instruments. If a piece of equipment fails in this area, it does not allow me to relax and enjoy the music. When I played the great swing/bebop tenor saxophonist Budd Johnson's The Stanley Dance Sessions (Lone Hill Jazz), the Nighthawk reproduced the beautiful warmth and rich tonality of his tenor sax in a totally natural way. The Nighthawk also excelled at creating a sense of image density. The illusion that Mr. Johnson was standing in my room playing his tenor sax in front of his small big band was quite realistic.

My final music selection was Miles Davis' Bitches Brew (Sony Records) to see how the Nighthawk would do both in the retrieval of micro-details and in high-end extension. Because the Nighthawk's noise floor is so low, it has great transparency that allowed the smallest micro-details to be easy heard in this very complex and densely mixed fusion music. The high-end frequencies that I listen for on this album were all there with excellent air and decay, particularly Davis' amplified trumpet. High Points
• The Raven Audio Nighthawk is constructed using very high-quality materials, hand-assembled in Texas, and shipped with NOS tubes. It has the look and feel of a much more expensive piece of gear.
• The Nighthawk delivers excellent overall speed/dynamics, natural and rich timbres and tonality, and a see-through transparency that allows all the little details of the music to be easily heard.
• The Nighthawk only produces 20 watts per channel; however, unless you have very inefficient speakers (less than four ohms nominal/lower than 85-dB efficiency), you should have no trouble getting volume levels that will serve the music in your listening room.
• The Nighthawk is an auto-biasing amplifier, so there are no hassles regarding ongoing monitoring to see if its power tubes are in their correct bias range.

Comparison and Competition
Two integrated amplifiers that would be competitors for the Nighthawk, based on price, are the Rogue Audio Cronus Magnum ($2,295) and the PrimaLuna DiaLoque 2 ($2,999). I found both of these integrated amplifiers to fall far behind the Nighthawk in their sonic performance, in two major areas. First, the Cronus Magnum and the DiaLogue 2 sounded veiled compared with the crystal-clear transparency of the Nighthawk. The Nighthawk's presentation of the smallest details and its clarity were on a much higher level than the other amplifiers. Second, the Rogue Audio and PrimaLuna integrated amplifiers do not have the beautiful timbres/tonality/color of the Nighthawk. I believe that these significant positive differences in performance are based on the higher level of materials and overall construction of the Nighthawk, along with its choice of 6L6GC tubes instead of the power tubes used by the other companies.

Conclusion
When I first unpacked the Nighthawk integrated amplifier, it was hard for me to believe--based on its build quality and very attractive appearance--that this was Raven Audio's entry-level piece. However, the ultimate surprise was the sonic performance of this terrific music-making amplifier. In the areas of timbres/tonality/color, dynamics, soundstaging, and micro-details/clarity, the Nighthawk outperformed anything in its price range and competes with far more expensive tube-based gear. Based on past listening experiences, I found the overall performance of the Nighthawk to be a sonic clone to one of my favorite integrated amplifiers from a highly regarded company, which uses 211 power tubes; however, that integrated amplifier retails for $6,499. The Nighthawk is auto-biasing and comes fully stocked with NOS tubes, which gives the buyer hassle-free entry to the world of tube amplification.

You'll automatically be entered in the HTR Sweepstakes, and get the hottest audio deals directly in your inbox.
Author
Terry London
HomeTheaterReview Product Rating
Value:
Performance:
Overall Rating:
When you buy through links on our site, we may earn an affiliate commission. Your support is greatly appreciated!