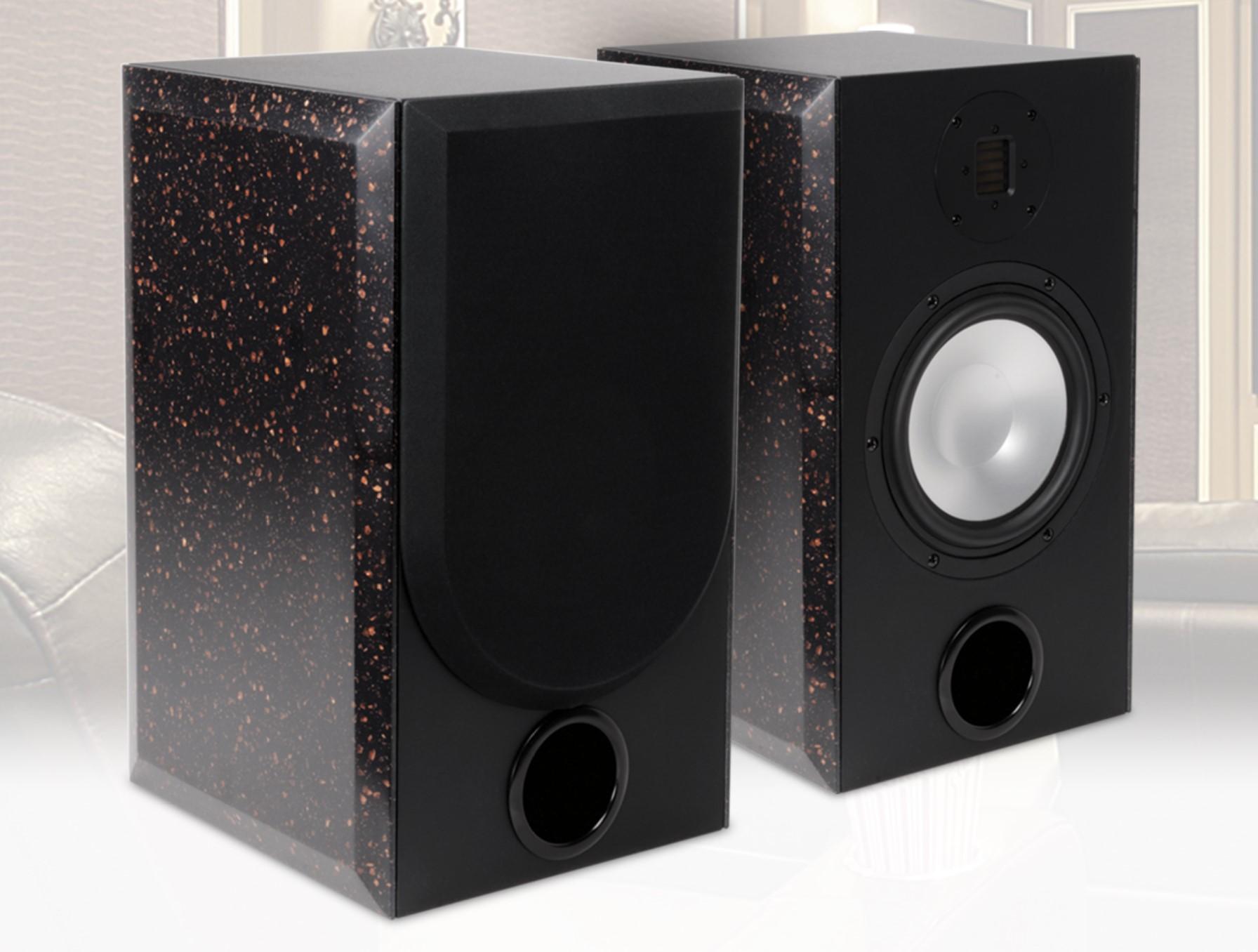 RBH's powerful active speaker is equipped with features and performance capabilities that make it stand out in the studio monitor marketplace. 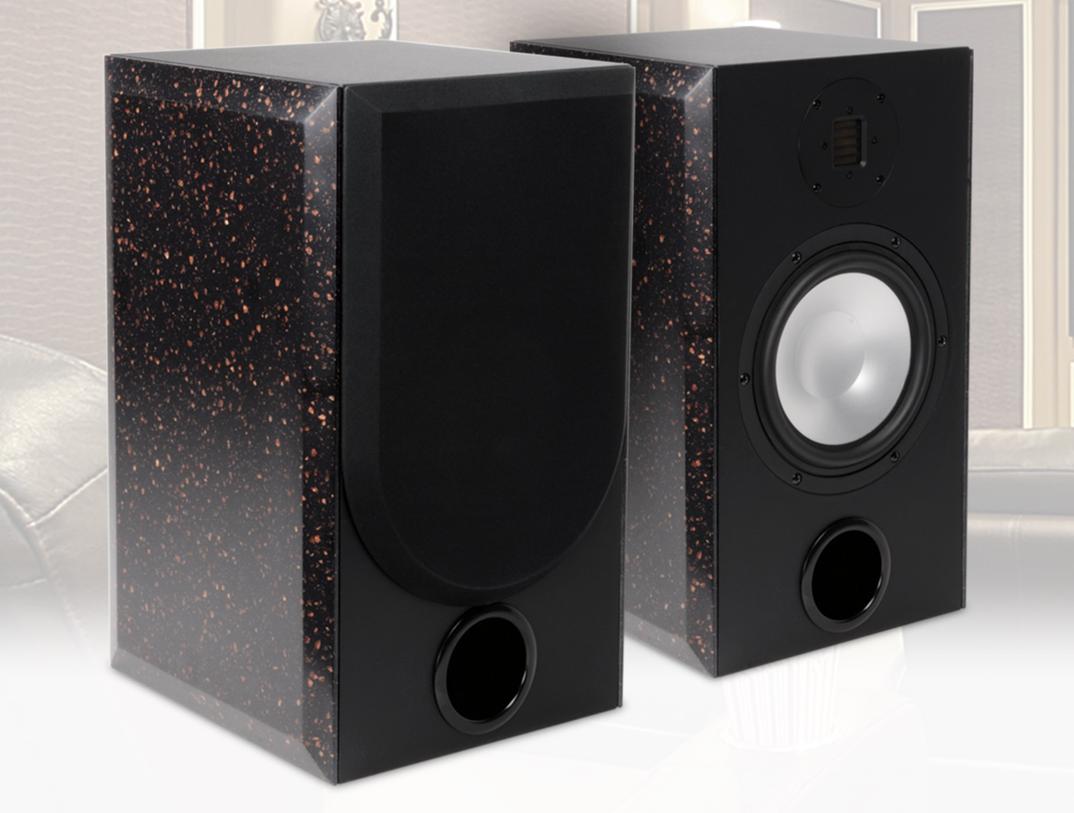 By Author: Olivia Deveau
Olivia Deveau is a former staff writer for HomeTheaterReview.com and previously served as print opinion editor for the Oak Park Talon. During her tenure with HomeTheaterReview.com, she was in charge of posting daily news and feature stories, and also proved herself to be an excellent gear reviewer. In addition to being passionate about music playback, she's also a musician in her own right, being a self-taught bass player.

Though RBH markets its PM-8 speaker as a “Powered Studio Monitor,” its design actually puts it in the “active speaker” category. Oftentimes used interchangeably, the distinction needs to be made, since the Venn diagram of active and powered speakers is not a circle. Simply put: an active speaker is always powered, but a powered speaker is not necessarily active. When it comes to a pair of PM-8s, there is no master speaker and a passive counterpart, and each benefit from digital crossovers and separate amplification for each driver.

The PM-8 is equipped with an 8-inch aluminum cone mid/woofer, Class D amplification that supplies 150 watts to the AMT tweeter and 250 watts to the subwoofer, balanced XLR inputs and throughout, and DSP controls (including Finite Impulse Response filters). The speaker has a frequency response of 32Hz to 20kHz, commensurate with its hefty size. Each weighs 43.35 pounds and stands nearly 20 inches tall, making a pair of them hard to miss, which may or may not work for you, depending on your room setup and intended use.

Since I tested the PM-8s for personal use and not professional studio sessions, the setup was relatively simple and smooth. Source components included an Apollo Twin USB DAW and 2014 MacBook Pro for Apple Music and Spotify Connect. I opted not to connect a subwoofer for this review.

RBH doesn’t provide optional stands for the monitors, but if there’s anything I’ve learned during my short time in the vast and hyper-specific audiophile world, stands are sacrosanct, and if you’re using them in a room that gets a lot of foot traffic, sturdy stands are an absolute must. So, the sizeable PM-8s were sitting pretty in the living room atop a pair of Argosy Spire 360Xi Studio Monitor Stands. The pair of PM-8s I reviewed had one monitor with composite side panels, and another without – the two available finish options for the speaker – and truly, both are equally attractive and could be fit into a home theater setup or studio arrangement easily – it just depends whether you prefer shiny or matte. Though the composite panels are supposed to minimize cabinet vibrations and as a result enhance sound, I really could not tell a difference between the two when isolating and A/Bing between them.

How does the RBH PM-8 sound?

Something that remains at the forefront of my mind when listening to new speakers is whether or not the music has been fundamentally changed. At most, a mix’s qualities should be enhanced, not disguised – minimal makeup versus an eighteenth-century powdered face. Thankfully, and unsurprisingly, the PM-8s forgo the Marie Antoinette routine and, generally, the genius of my music choices was magnified but not altered.

A perfect example of this would be Lana Del Rey’s 2014 Ultraviolence. Produced in part by one half of The Black Keys, Dan Auerbach, Ultraviolence’s depth is often dismissed. When I cued up the deluxe edition on the PM-8s, however, the album was truly given new life, and my middle-school self smiled smugly at Del Rey’s detractors. “Florida Kilos,” a sultry ode to one of Del Ray’s favorite topics (drugs), comes through so smoothly and powerfully, I felt like I'd really only heard half of the percussive choices till I heard the song through the PM-8s.

Similarly, “West Coast,” a fan-favorite love letter to the hippie hideouts of the Golden State, finds new depth and takes advantage of the monitors’ impressive imaging abilities. Del Rey may very well be a "studio artist" (agree to disagree) but the PM-8s make you feel like the singer is right there in the room with you.

Another album that well and truly floored me was Florence + the Machine’s 2018 LP, High As Hope. An album generally ignored within the artist’s repertoire, High As Hope is more muted than the band’s bigger hits, but it's a perfect example of how important dynamic range is. “Big God” is the album’s spotlight of Welch’s ability to hit a lower register, and though the song is relatively simple, there’s so much going on in the background that's easy to miss. The eeriness of the piano and the song’s exploration of abandonment is brought to the forefront, and the cleverly mixed-in strings sample from Simon Benson & Peter Cox’s “Azure-Blue” probably would not grab you by the throat and make you feel something if it weren’t for the PM-8s's authority. Welch’s transition from soft to forceful vocals and everything between is perfectly captured by the monitors, as is the blink-and-you’ll-miss-it inclusion of Kamasi Washington on tenor sax.

Next, I turned to Thom Yorke’s “Hearing Damage,” from the New Moon soundtrack. The distortion and tendency towards high-frequency sounds makes this track a tricky bastard, in that even on the best setup, the song simply has a tendency toward harshness in keeping with its name. I was relieved to learn the PM-8s passed the biggest treble test I gave them. Yorke’s vocals are perfectly set against the song’s percussion at the forefront, and the monitors registered every ounce of low-end distortion and hit of the hi-hat with beauty and precision.

Similarly, Tori Amos’s “Cornflake Girl,” and “Crucify,” both featured on A Tori Amos Collection - Tales of a Librarian, reach impressively high highs and low lows within their relatively short lengths, and the PM-8s in no way neglect either end of the audible spectrum. The sleigh bell-laden percussion track and flute solo of “Cornflake Girl” contrast against the deeper piano and bass riffs, but instead of making the mix sound jarring or discordant, the monitors bring smaller aspects to the forefront and blend the opposing sounds together well.

“Crucify,” a song that relies almost entirely on a speaker’s ability to provide perfect depth as well as imaging, comes out crystal clear and bass-laden, exactly as it should.

As mentioned briefly above, the monitors’ ability to convey space is so prevalent it feels like a crime to not try and test those limits. Enter Lykke Li’s brand of outside-the-box pop, exhibited most fiercely in 2011’s Wounded Rhymes, a staple in every alt aficionado’s collection.

“Youth Knows No Pain,” a masterpiece on its own, is a shock to the system via the PM-8s. Li’s steady soprano glides steadily against the constant bass drum and tambourine, and the percussive presence of “Sadness Is a Blessing” feels much more imposing, in the best way possible. The monitors mask nothing, Li’s voice remains the focus, but every other element is allowed to shine, and any listener could pick out each and every hit of a cymbal or piano key as if it were its own isolated track. As someone who has listened to this particular record as if it were written just for me and across every system I can, believe me when I say there’s truly something special about the way it's rendered on the PM-8s.

When it came to rock music, the PM-8s unsurprisingly shone. As someone who appreciates and even prefers big sound, I loved throwing a wide variety of rock at the PM-8s to see what they could handle (spoiler: they took it all and then some). Type O Negative’s 1993 single “Christian Woman” is a great example of the range that rock can have, not to mention a true masterpiece. Peter Steele’s raspy-soft vocals play so well against Kenny Hickey’s hard-hitting guitar – there’s no push and pull, both incredibly powerful elements are center-stage, and the only distortion detected is the band’s signature gothic metal sound, which favors a harsher aesthetic. Even the most discerning metalhead would be pleased to hear how well this criminally underappreciated band images with these monitors.

It's very hard to find something wrong with RBH’s take on the active studio monitor. Are they really large? Sure. Do they absolutely kick the ass of every speaker I’ve listened to recently? Also, yes. If you’re looking for an active monitor for use in a home theater setup, however, these may not be your best bet. Though they are versatile and magnificent-sounding, they are, at the end of the day, studio monitors, and not the most user-friendly for AV applications.

Additionally, the lack of coordinating stands is a minor hitch, but may throw some off, especially since RBH’s studio monitor stand offering leaves a bit to be desired when it comes to stability. You certainly don’t need $500 stands, but you might want to invest in something to keep these guys elevated and secure.

How does the RBH PM-8 compare to the competition?

Most other active studio monitors on the market are built with dome tweeters, not AMTs, so if that specific aspect matters most to you, the RBH PM-8s reign supreme when it comes to price point and sound capabilities.

If the tweeter construction isn’t an issue for you, but price is, the best studio monitor that offers similar sound capabilities at a relatively lower price would be the JBL 750P active studio monitors ($99/each). However, its frequency range is relatively limited by comparison – as expected – and output is understandably much lower.

The Focal Solo6 Be may be the closest match in specs and price ($1,499/each), but that specific monitor is intended for nearfield use, so it’s not as versatile as the RBH.

I’ve raved enough about the sound for the message to come across loud and clear, but it bears repeating: the PM-8s are very much next-level, at least when it comes to do-it-all, powerhouse monitors. Verifiably elegant for a pair of bulky cabinets, the PM-8s hold up against a wide range of music, and never seem to falter or make you think, “does this song sound better in my car?” – a thought I have most definitely had at times with other speakers. Though a bit on the pricier side, the monitors seem appropriately priced at $1,995.95 each with composite side panels, and $1,595.95 each without.

Some may choose to go the more traditional route and opt for a pair of bookshelf speakers geared towards a more traditional setup, but if you’re looking for high performance speakers that don't force you to fret over finding the right amp, the PM-8s are most certainly worth your consideration.