Jerry Del Colliano discusses our five-star ratings system and explains why ratings don't (and shouldn't) tell the whole story in any review. 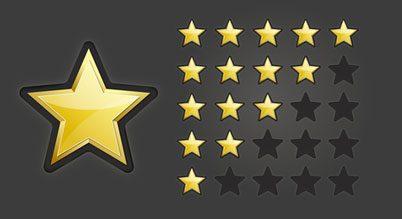 In my 17 years of online publishing, my sites haven’t always had the five-star rating system for gear reviews. We added such a system less than five years ago when the almighty Google started pulling said star ratings, as well as photos of the Google-approved reviewers, into its search results. When you searched for something on from XYZ Brand, model number 123, those powerful sites with images of their known reviewers and their one-to-five star rankings looked so much more compelling that Google users just had to click. The investment in outfitting reviews with star ratings was well worth it at the time. Today, Google downplays the importance of star ratings or “rich snippets,” as SEO insiders call them. They’ve seemingly done away with posting photos of the reviewers, as well. The times, they have changed, but the reviews have not. In many ways, they’ve only gotten better, offering more resourceful links, more videos, more musical examples, etc.

In the past few months, I’ve had a few enthusiastic conversations (to be polite) with AV manufacturers reagrding why their product was rated the way that it was. Of course, they all want five stars for both performance and value for every product they sell, which simply is impossible. They will fight for it, nonetheless. A $30,000 pair of audiophile speakers might get the coveted five-star ranking for performance; however, to earn a five-star value, they would have to perform on par with speakers costing many times more. Few, if any, perform at that level. I remember reviewing my Paradigm Signature S-8 floorstanding speakers in my old theater room. They were the same general size as the previous pairs of Revels and Wilsons that I had in the room before, but the Paradigms measured better, sounded just as good, and cost about one third the price. Now we are talking about double five-star review territory.

We’ve provided our writers with a set of guidelines on star rankings to encourage better consistency, but the fact remains that every reviewer is different in terms of his or her overall outlook on AV gear. Some are drawn to the true value-oriented products, and others are lured by gear in the high-end price range; each of those writers will have a different perception, especially of a product’s value. Unlike the casual shopper who is looking for a few insights before making a purchase, a serious AV enthusiast who loves reading about gear should build an understanding of the voice of the reviewer. Do you tend to agree with a certain reviewer or not? It’s okay if you don’t because you can still gauge your opinions from there.

What has come up in conversation recently is the idea that a consumer wouldn’t buy a product if it doesn’t have a five- or 4.5-star review, be it for performance or value. That is simply absurd. A $10,000 power amp that is a four-star-plus performer might only be a three-star value, in that you are paying for what you get at $10,000 versus an amp at, say, $4,000. The $10,000 amp might be the better performer, but what do you have to pay to get that N’th degree of performance? The answer is about $6,000 plus tax, and that’s a lot of coin.

Another key factor we try to consider in big-ticket products is resale value. If the $30,000 speakers will sell used for $20,000 in five years, then they should be ranked better in value than a cutting-edge, first-generation Ultra HD 4K TV that lacks any proven video connections designed for the 4K Blu-ray spec. That $30,000 TV could be rendered obsolete in a matter of years; thus, its performance might be as high as you can rate it, but the value should be ranked pretty low. I did this with Samsung’s 85-inch S9 Ultra HD set. It was the best-looking set that I’ve ever seen, thus I gave it a five-star performance rating. But who knows if it will be able to do 10- or 12-bit color and handle other UHD goodies promised in the near future, so it got one star for value. The person who buys this TV needs to know that they are on the cutting edge of technology, and they could get cut in the future… but for now, they’ve got the most bad-ass looking TV money can buy. Note: That review ran over a year and a half ago, and the TV is still being sold at $40,000 today; so, there are clearly people who are willing to go out to the cutting edge to get the best possible picture on an 85-inch screen.

Reading past the star ratings is important, in that there is simply so much more information to be found in the text. I also urge readers to audition products. I know more and more specialty stores are closing, but we’ve created a pretty definitive list of the best U.S. and Canadian dealers that still give you the old-fashioned “stereo store” treatment. At the same time, more and more companies are offering no-risk, in-home trials, which makes you the judge, jury, and executioner on your next AV purchase. Unlike in the 1970s and 1980s, when audiophile reviewers for print magazines wielded so much power, today’s reviewers aren’t gods (okay, maybe Brent and Adrienne but…). Ultimately, your opinion is the one that matters most, as your system is a personal reflection of your tastes in audio and video. Reviewers are here to help start the conversation, but it’s your job to do the additional leg work to get the gear you will love the most in your system. Dealers, Internet retailers, and manufacturers are here to help, and many of them will bend over backwards to help you.

While manufacturers complain that the ratings aren’t high enough, readers sometimes say that we give too many high ratings. It’s worth mentioning that editors, reviewers, and publishers don’t normally go out seeking products that outright suck. Do we get them? Sometimes. What do we do with them? If it’s a high-profile product that already has people talking, then we’ll run that review…because people need to know what’s wrong with it. If it’s a small start-up company that needs to work out some kinks, we might just give them private feedback and revisit the product at a later time. The negative review simply isn’t worth the virtual ink that it’s written in. Other times, review samples show up broken or defective. Earlier this year, we sent a speaker system from a well-known and well-respected manufacturer to a writer, who wound up hating it. We were really surprised by this. We talked it through and decided to send a new example to a different reviewer, who loved the speakers to the point where they landed on our Best of 2014 list. The first samples went back to the factory and were measured; as it turns out, they were damaged in shipping.

Overall, the skew of reviews in any publication is going to go towards the positive, as editors and publishers are always trying to seek out the coolest, most exciting, most innovative products they can find. Very few are seeking the “gotcha moment” where they can expose a product for being a piece of crap. Most are looking to evaluate the best of the best in meaningful, measured ways.

Today, with a number of really good online resources for reviews and a few remaining print magazines, you have tremendous access to information that can lead you to the right AV buying decision for you. It’s so much easier to actually interact with the general population, the writers, the editors, and the manufacturers so that you can get the information that you need to make the right decision. I still think star ratings are helpful, but they are only a start. So much more than a five-star rating is needed to pull the trigger on a meaningful AV upgrade.