With the Resonessence Labs Herus Jerry Del Colliano finds that good things do come in small packages. With great sound and portability the lack of some key accessories one of the few marks against it 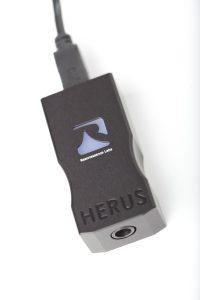 For those of us who travel a lot, it's tough to be away from home. We miss our family. We miss our dog. We miss our 600-thread-count cotton sheets, but the road beckons. More than 25 years ago, I started bringing my audio with me on the road when I used to travel from my childhood home of Philadelphia to our family home in Scottsdale, Arizona. My travel rig back then included a bulky Sony Discman, powered by eight AA batteries and rocking an internal AM/FM tuner. I had some mismatched yellow plastic Sony workout headphones that positioned the rock-hard earbuds into my ear canals in a way that was, to be polite, uncomfortable. Thankfully, we'd connect in Dallas on many trips out, as the eight AA batteries were dead before I got to DFW, thus requiring another pricey investment.

Roll the tape forward to the introduction of Apple's iPod, and the game changed. I was lucky enough to get an iPod two weeks before its launch through Apple's PR firm, and it changed the game for me, as you could easily get 3,000-plus songs (granted in pretty crappy, Napster-like resolution) in the palm of your hand and with long battery life. I added to my beloved first-generation iPod a pair of Etymotic Research ER-4A in-ear monitors. At the time, they were a really professional audio solution but sounded ten times better than any other small, portable headphones. What was cool about the Etymotics was that you could have custom ear molds made that fit your ear perfectly and thus blocked out lots of background noise.

Roll the tape forward to today, and you have a world where there are more than 150,000,000 Apple iPads in the market and laptops are basically media hubs loaded with music in HD (thank you, HDTracks.com, Acoustic Sounds, and others) as well as TV shows, movies, and other content waiting to distract you from the agony of traveling. Starting at this year's Rocky Mountain Audiofest, I took on the challenge of making another upgrade to my travel rig. First was a new set of headphones, which started out as a customized pair of Ultimate Ear UE7-Pros and then morphed into the Ultimate Ear Studio Monitors that were designed in conjunction with Capitol Record Studios in Hollywood to be the most resolute two-way, high-performance headphones you can purchase. Designed more for performers than for audiophiles, these earphones required some tricks to get the setup perfect, including a sit-down for an ear-fitting, a hearing test, and an ear-cleaning (a wild experience if you've never done it). With new headphones in play, I decided to start looking at other goodies to make my travel rig ultra-high-tech and ultra-lightweight, but also to sound as good as possible. This brought me to the Resonessence Labs Herus DAC ($399). Writer Brent Butterworth and studio tuner Bob Hodas had mentioned that they heard this small, portable DAC and that it was worthy of note, so I ordered one at once. The Herus is a portable DAC made out of a small but rock-solid chunk of aluminum. It's diminutive in size, about 1.25 inches wide by 2.5 inches long by 0.75 inches high. It weighs practically nothing and is powered from the USB port on your laptop, so it needs no power source, which makes it excellent for travel purposes. On one side of the DAC is the USB input; on the other side is a 0.25-inch analog headphone output. Personally, I don't have many headphones with a quarter-inch jack, so I ordered a nicely-made Sony one-quarter-to-one-eighth-inch converter jack to plug any number of headphones into this DAC. You do need a cable to get from your laptop to your Herus, and I went with a nine-inch USB (rectangular) to USB (square) Transparent cable that's also small, somewhat flexible, priced around $100, and sold through dealers or online. Wireworld also makes some really nice, high-end USB cables that I want to try with my travel rig.

Once you are done plugging in your headphones or desktop speakers (I also used X-HiFi XDC-1 electrostatic speakers with a sub for some nearfield listening), there was only one more trick left, which was to go into the settings on my Mac and select the Resonessence Labs Herus as the audio source. I switched to that DAC and BOOM ... I was rocking.

The Herus is a USB 2.0 asynchronous DAC that works on Apple, Windows, and Linux platforms. It can be easily firmware-updated when needed, but it came out of its tiny box ready to rock for my system. A Thesycon USB driver is reportedly needed to make the DAC work on a PC, but I didn't get to test that, as I mainly used an Apple Macbook Pro as my source both for headphone and nearfield listening. As amazing as an Apple laptop is, it just doesn't pack the audiophile-quality DACs to replay today's HD content at its best or, better yet, scale SD content to better-sounding, upconverted audio, as most of my content is in full-resolution CD-quality AIFF files.

Continue to Page 2 to hear samples from classic and recent albums that demonstrate what the DAC can do, plus Highs, Lows, and the Conclusion . . . On "Pigs on the Wing (part 2)" in an AIFF file from Pink Floyd's classic concept record Animals, I could on the first note hear an increase in depth and three-dimensionality. Don't believe me? Yank the cable and stick it in the side of your laptop, switch the input back to the internal output, and play the track again. It's shocking, but be sure to match the levels, as the Herus is loud out of the box.

"Synchronicity I" from The Police's Synchronicity record in the AIFF format shows how the Herus figuratively dominates the internal DAC inside of the MacBook Pro on more complex, dynamic tracks. Stewart Copeland's bombastic drumming had snap, paired with power. The cymbals in the opening seconds were less stinging and more shimmering with the Herus in the loop. Sting's vocals sounded smoother and more resolute than they did without the Herus.

On "I Missed Again" (perhaps the musical theme to my golf game) from Phil Collins' Face Value in AIFF format, I could hear the same improvement on the bombastic horns in the mix as I heard with Sting's vocals earlier. They sounded vibrant but not glaring, with a depth of soundstage that you just don't get without the Herus in the loop. The underlying piano also had a wonderful texture, while the stock, internal DAC sounded much flatter.

The most impressive track with both headphones and nearfield listening was "Hella Good" by No Doubt. The processed bass was so much lower and tighter with the Herus in the loop. Gwen Stefani's layered voice was vibrant but not overly forward-sounding. The bass dipped to lows that you just can't get without an external DAC, as I found when I kept switching back and forth from the Resonessence Labs Herus to the stock DACs.

I heard the same level of resolution when demoing "The Song Remains the Same" from Led Zeppelin's Houses of the Holy as I did with "Synchronicity I." Jimmy Page's double-neck Gibson SG had a shimmering but not glaring tone to it. John Bonham's beats were suitably laid down with huge cymbal crashes that decayed beautifully when the song transitioned out of its break-neck introduction. When moving to HD files for TV shows like the "3:00 to 4:00 PM" episode of 24, what was then supposed to be the series finale, I could hear the highly orchestrated show soundtrack with vivid new life. Deeper into the show, the cocking of sniper rifles and the clicking of handcuffs were resolute and realistic-sounding.

• The Resonessence Labs Herus is small in size but large in its potential to provide upgraded sound.

• The Herus is built like a Sherman tank. If you needed to fend off an angry foe, just put it in your hand, make a fist, and start swinging.

• The Herus is nicely upgradable via firmware and works with all computer platforms.

• The Herus doesn't come with a one-quarter-to-one-eighth-inch adapter, so you need to buy one on your own for many consumer applications.

• The Herus doesn't easily connect to an iPad or other tablet device.

• The Herus does require you to change output settings on your laptop to get sound rolling.

• The Herus doesn't come with a cable, but it needs one to work. Even RadioShack didn't have the USB cable that I needed for short-term listening tests, so I had to wait for my Transparent to arrive via FedEx.

Meridian's $199 Explorer comes to mind as a portable USB DAC but, as I understand it, the Meridian doesn't easily work with Apple devices, so I didn't order one. Audioquest has a portable DAC called the Dragonfly at $99, but it doesn't have the build quality of the Herus. AudioEngine, a company more known for powered speakers, now has a pretty slick-looking USB DAC for laptops, but the company doesn't have the pro audio background of Canada's Resonessence Labs.

Upgrading to a slick set of killer headphones is a smart move for anyone who travels more than a few times per year. For those looking to travel with a mobile version of your audiophile rig, a high-end USB DAC is worthy of your consideration. Yes, it's more complex than just plugging your headphones into the side of your laptop or iPad, but it comes with meaningful audiophile benefits. Meaningful is a bit of an understatement, as the $399 Resonessence Labs Herus provided a drastic upgrade to the sound of my road rig. I've gone for the nth degree of performance by mating the custom Ultimate Ears earphones, the Transparent USB cable, and the Herus DAC. Don't be surprised if the guy next to you asks you what all that gear is. Just cue up your best demo track and have him plug his headphones into the side of your laptop for 45 seconds - then add in the Herus. Your work will be done.