The Concerta F12 is one of the smallest first generation Revel speakers. Offered at a budget price but with the same upper end as the larger models in the Concerta line this can still be a great speaker especially when well mated to a subwoofer. 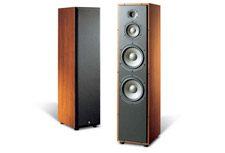 When one of the biggest names in high-end audio decides to make an “affordable speaker,” reviewers amazingly get a little skeptical. So when Revel introduced the Concerta line with the F12s, reviewed here, everyone including this reviewer took notice with nervous anticipation. Could you really get that lust-worthy Revel sound without the $20,000 investment? Retailing for just under $1,300 for the pair, the F12s are an everyman’s loudspeaker rather than some audiophile pipe dream. At their price, they lack that million-dollar finish at first glance. On a second look, you’d be hard-pressed to call the F12s anything but real Revels. Power them up, spin a disc and the lineage becomes instantly apparent.

Sticking with the F12s’ visual presence for a minute, your grand and some gets you probably one of the starker or even, dare I say, more boring-looking speakers money can buy. The F12 is a large, rectangular box, with a rather large and bulky speaker grille, resting on four rubber feet. You can get the F12 in two finishes, black ash and cherry. Both finishes are suitable and on par with a speaker in the F12s’ price class, but there is not much by way of garnish to dress up their otherwise plain appearance. Around back, the F12 has a flared bass port resting just above its rather pedestrian bi-wire binding posts. Knowing that Revel is responsible for some of the more breathtaking-looking speakers in history makes the F12 a bit of an enigma.

So if your $1,300 doesn’t buy you much in terms of the F12’s sex appeal, it more than makes up for it in sonic performance. The F12 is a full-range, three-way speaker, featuring dual eight-inch bass drivers coupled with a single five-and-one-quarter-inch midrange driver and a one-inch dome tweeter. The F12’s tweeter has a high dispersion design, making for a larger sweet spot than that of most speakers in the F12’s class. The F12 has a reported sensitivity of 90.5dB into a six-ohm nominal load, allowing for an in-room frequency response of 58Hz to 18kHz. While the F12’s sensitivity rating might having you shopping for a moderate receiver or integrated amp, know that the more high-end you can go with your components, the better the F12s are going to sound. While the F12 can plunge mighty low, if you want to tickle the depths of the musical spectrums or feel the most visceral aspects of an explosion, you’re going to want to mate the F12 to a capable subwoofer. However, in an average-sized room, the F12s should be full-range enough to satisfy most listeners.

Read the conclusion, High Points and Low Points on the next page….

High Points
• For a large, boxy speaker, the Revel F12 sounds unexpectedly delicate and precise, imaging almost like a monitor speaker and virtually disappearing from the performance when placed properly in a room.
• The F12’s high-frequency performance is sublime and among the best in its class, while the midrange is warm, natural and full-bodied, without being bloated or overly pronounced.
• The F12’s overall sonic character seems to adjust and adapt to the listener’s source material, making it an ideal speaker for a wide variety of listening tastes.
• Shockingly, the F12s become better-looking with every passing track of a CD, as their sheer sound quality begins to make up for their visual shortcomings.
• When you consider the F12s’ sound, they compete not with their similarly-priced rivals, but instead with speakers costing twice as much.

Low Points
• I know every dollar was spent on performance, but there are subtle things that could have been done to dress up the F12 a bit, starting with the binding posts and cabinet seams.
• While the bass performance is adequate and solid, you need to bring enough power to the party for the F12’s bass to sound its best or add a subwoofer and effectively cut the F12’s full-range duties. At $1,300, you can justify the additional cost of a sub without too much worry.

Conclusion
For just under $1,300, there aren’t many full-range tower loudspeakers that come close to matching the Revel F12’s performance. While far from the prettiest loudspeaker, the F12 is a knockout when it comes to its music and movie performance. With a natural, easygoing, non-fatiguing sound, the F12 is a speaker you’re bound to lose time in front of as you spin through disc after disc. While a subwoofer is almost mandatory for true full-range sound and above-average components will reward you in spades, the F12 is a stunning bargain and one of the best values in today’s crowded speaker marketplace. Highly recommended.

• Read a review of the Revel Ultima Salon2 speakers from Jerry Del Colliano here.
• Check out audiophile floorstanding speaker reviews from the likes of Revel, B&W, MartinLogan, PSB, Klipsch, Polk Audio, Golden Ear and many others from HomeTheaterReview.com.