The largest of the mid-level first generation Revel speakers, the F52 had solid full range performance with a simple cabinet design. These speakers got the same treatment as all Revels with matched drivers to ensure each speaker perfectly matched their standard. 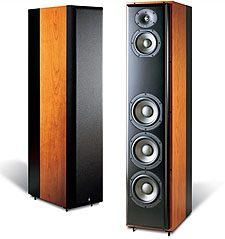 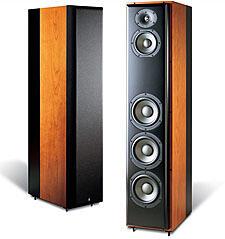 Ultra-high-end or reference-grade speakers are all well and good, but many consumers, like myself, often have to search for the giant killer or gem among a mid-fi product line due to cost constraints. For years, that giant killer lurking in the shadows within the Revel line was the delectable F30 loudspeaker, arguably one of the best affordable full-range loudspeakers ever produced. Well the F30’s time in the spotlight has come and gone. It has been replaced by the new Performa F52, which hopes to build on the F30’s stellar reputation with a sleek new footprint and design.

Retailing for just under $7,000 a pair, the F52 is far more, ahem, lighter on its feet than the F30 and features a rather streamlined and somewhat tapered cabinet that comes in two finishes, black ash and cherry. However, unlike the F30 and more like a VW Beetle, the F52 has a smooth black finished back side that, when viewed with the F52’s grille on, makes the speaker somewhat awkwardly symmetrical-looking. The F52 is not an ugly speaker, not by a long shot, but there are a few design cues that make it “unique.” An easy way to tell the F52’s front from back is the rear-mounted bass port that sits almost dead center in the speaker, accompanied by (as near as I can tell) the F30’s binding posts and attenuation controls.

The F52 is a three-way, full-range loudspeaker featuring a total of five drivers, three six-and-a-half-inch woofers mated to a five-and-a-quarter-inch midrange driver capped off by a one inch aluminum dome tweeter. The F52’s woofers and midrange drivers are all made from Revel’s proprietary Organic Ceramic Composite material, which makes the drivers very rigid and lightweight, resulting in lightning-fast speed and articulation for bass and midrange drivers. Because the F52 has three smaller bass drivers, it’s able to keep its footprint far more compact than the F30 with its larger single bass driver. The F52 has a reported frequency response of 31Hz to 18kHz and a sensitivity rating of 87.5dB into a six-and-a-half-ohm load. That’s random. This means the F52 is far from the most efficient or easy to drive loudspeaker, so be sure to bring a bit of muscle to the party to make the spry tower sing.

High Points
• The F52 picks up where the F30 left off sonically, sounding far more composed, articulate and agile than the F30 ever did. The signature Revel midrange and high-frequency performance is present in spades in the F52, but it’s the bass that steals the show. While not as deep-sounding, the three-driver array in the F52 is faster, more defined and textured than the F30’s old bring-the-noise cone.
• The F52s disappear sonically and image more like large monitor speakers than typical floor-standers, casting a very wide and well-defined soundstage.
• Dynamically, the F52s are titans, making them ideally suited for explosive musical passages and blockbuster movies. Don’t think they’re all shout and no substance, though. No, the F52s are surprisingly nimble and delicate when need be.
• While I harped on the F52’s looks a bit, it really is a striking speaker that, when finished in cherry wood (flanked by the speaker grille and black satin rear), appears tailored and sophisticated.

Low Points
• The F52 is a much more mature and technical speaker than the F30 it replaces, but it doesn’t possess quite the same amount of “fun” the F30 did, which may be a good thing for some listeners.
• Because of its large rear port, the F52 is going to need a bit of room to breathe to sound its best and for the bass to remain taut and agile. Keep placement and the size of your room in mind, as the F52 is roughly 18 inches, deep meaning its drivers may be sitting four to six feet from your front wall.
• While the F52s are more affordable than most high-end speakers and compete with costlier speakers, some costing three to four times as much, they need a fair amount of quality power and a supporting cast to sound their best, which may or may not drive up the total cost of ownership. I say may or may not, because it depends largely on components you currently own and/or what level of sound quality you’re willing to live with out of the F52s.

Conclusion
The Revel F52 loudspeaker has a tremendous design and sonic achievement. It isn’t so much an update of the famed F30 as it is a whole new animal. While I love the F30, the F52 is better in every regard and, because of its slimmer waistline and unique finish, it will fit nicely into a wider variety of listening spaces and decors. The $5,000 to $10,000 speaker category is hotter than ever, with stiff competition coming from nearly every manufacturer, which places the F52 somewhere in the middle of the pack in terms of price, but not performance. When it comes to performance, the F52 is competing at the head of the class.