With one of the most odd-ball names in the audiophile community - the Richard Gray's Power Company Pole Pig aims to bring the power reserves from your transformer by the street directly to your audiophile and home theater system. 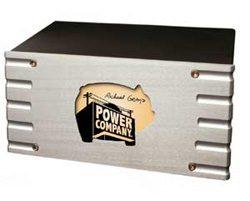 At first glance, the Richard Gray's Power Company Pole Pig ($1,595) looks a little odd, as it is about half as wide as you might expect a full AC power component to be. On closer inspection, you will notice that the logo on the front of the unit is in fact shaped like a pig. No, I am not kidding. I think the Richard Gray's Power Company people were in a joking mood when they were designing this actually pretty serious AC power product designed for home theater use.

The Richard Gray's Power Company Pole Pig is an AC power isolation device that in theory creates the effect of having a big transformer (thus the "pole" part of the name), with its big reserve of power, right next to your rack. The odd size of the Pole Pig comes from the concept that you might pair it with the also half-rack-sized Richard Gray's Power Company RGPC 600s balanced power device to make what the company calls an IsoGray system. Back to the Pole Pig, the unit is designed to remove nasty ground loops that cause gnarly hums and can create video noise as well. The Pole Pig is rated to 700 watts and is best suited for audiophile sources, DVD-Video players, AV preamps, HDMI receivers and, most specifically, Blu-ray players.

High Points
• Less noise is a good thing in any AV system and the Richard Gray's Power Company Pole Pig can likely reduce the noise in your rack. Simply plug one in and give it a try. You will hear within seconds the effect of the unit being in the loop.
• All Richard Gray's Power Company products are designed and built in the United States. I will never get tired of writing that in the high points section.

Low Points
• If you don't pair the Richard Gray's Power Company Pole Pig with a RGPC 600s unit, its size is certainly odd, not that the concept of odd-shaped gear is anything new for the company. Their RGPC 400 Pro has been quite successful for them and it's not really designed to be installed into a traditional rack.
• At its price (especially when adding a RGPC 600s to the system), the Richard Gray's IsoGray system is basically a passive power system and, while highly efficient, there are other "active" systems at the same price that do full power regeneration and battery backup for the same or less money.

Conclusion
While perhaps a little too cutesy when it comes to the name, the Richard Gray's Power Company Pole Pig on its own could earn its way into any good audiophile or videophile system, specifically next to your best source components. I have tested it and it absolutely can cure some noise issues and with the RGPC 600s beside it, it's like having a nice reserve of clean power right next to your rig. Any Richard Gray's dealer will let you test this system at home or show you how it works at their showroom. Many of the better custom installers are starting to use these products to get some solid, reliable technology into today's increasingly complex and often flaky AV systems.