Live from New Orleans comes one of the most polarizing brands in audiophile AC power products - Richard Gray's Power Company. With southern charm and a lot of heavy metal - this little, vertically oriented AC product can improve the sound of your audio system and video devices. 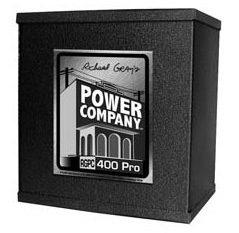 Dreamt up by a television repairman named Richard Gray and brought to market by Dick McCarthy, one of the most capable salesmen ever to work in the audiophile and home theater market (he's the guy who put Oreck vacuum cleaners on the map back in the day), comes the AC power product that started it all for the Richard Gray's Power Company brand: the 400. The newest version of this vertical, small AC power product is called the RGPC 400 Pro, priced at $795.

The Richard Gray's Power Company RGPC 400 Pro is designed to be placed behind an equipment rack and/or near a video projector, hidden out of the way. The unit has four receptacles and is based around a 6,000-watt parallel choke. Unlike power strips that can either take one surge and then lose their ability to protect your system (and/or stop working completely), the RPGC 400 Pro is a non-sacrificial device that to date has never failed in the field from a power surge.

High Points
• The level of protection the an RGPC 400 Pro gives your system is enough to make you not worry about your gear being damaged by a surge in ways that can wreak havoc with power strips and cheaper AC power "filters."
• Richard Gray's Power Company products are made in the United States, a rarity in the world of home theater products.
• Many people fail to try a RGPC on a video projector, but there can be a noticeable improvement in the performance of a video display when getting clean, reliable power. Also, the protection can keep you from making a claim on your insurance if things ever go haywire with a power surge.

Low Points
• The Richard Gray's Power Company PRGP 400 Pro is ugly. It is built nicely overall, but has no sex appeal, unlike products from PS Audio, Exact Power, APC and PurePower.
• The RGPC 400 Pro doesn't do any filtering technology, battery backup or power regeneration.

Conclusion
I feel safer with a Richard Gray's 400 Pro between my JVC RDS-2 1080p video projector and the AC coming out of the wall. While the performance in incrementally better with the RGPC in the loop, the idea that I have a non-sacrificing AC power device between me and an aging California electrical grid, which has blown up products like my $33,000 Mark Levinson N° 40 AV preamp in the past, just makes me feel better. For the money, the RGPC 400 Pro is a reasonable, solid addition to any audiophile or home theater system looking for a bump in performance and a lot of peace of mind.