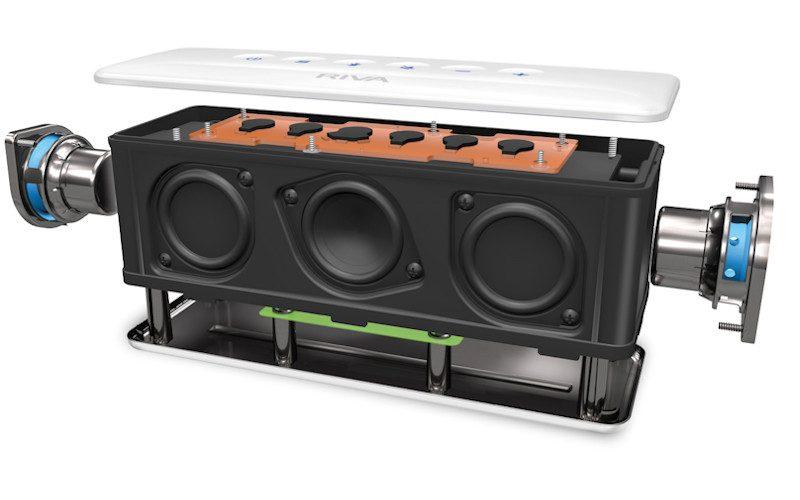 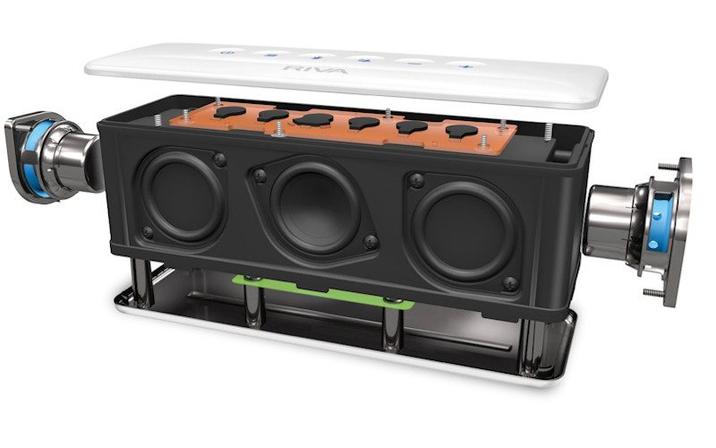 Riva Audio has introduced the Riva S, the little brother to the Turbo X that we reviewed in 2015, which made a big splash in the Bluetooth speaker world. The Riva S ($149) measures 7.5 by 2.5 by 2.6 inches and weighs 1.5 pounds; compare that with the Turbo X, which measures 9.1 by 3.5 by 4.1 inches and weighs 3.5 pounds. The Riva S has glossy top and bottom panels with a color-coordinated perforated steel body and a row of flush buttons on top. It comes in three colors (black/titanium, white/silver, and white/gold). The power cables are also color-coordinated, but the included carrying case comes only in black (although the lettering on the case is coordinated to the speaker color).

Although it's smaller than the Turbo X, the Riva S is still a mid-sized Bluetooth speaker. Like its bigger brother, it contains a three-channel amplifier that powers three full-range drivers and four bass drivers. The Riva S gets by with 30 watts in comparison with the Turbo X's 45 watts. The backside sports an auxiliary input, a micro USB port for updates, a USB output for charging portable devices, a 19-volt DC power input, a battery level indicator, and a battery on/off switch. A removable cover protects the connection panel from dust and splashes.

The Riva S retains many of the features found on its bigger brother: the phono level input; Trillium Audio technology; splash resistance; a noise-/echo-cancelling speakerphone/microphone; and aptX. It adds a feature called TrueWireless technology. By selecting "TrueWireless" in the Riva Ground Control application (available for iOS and Android), I was able to use two Riva S speakers to create a stereo pair. If you are looking for a portable Bluetooth speaker that can also excel in the home environment, this is a huge feature. Being able to create a stereo pair of speakers elevates the listening experience significantly.

I listened to the Riva S both as a single unit and as a pair. It performed well as a single speaker. Its response curve is shifted upward compared with the Turbo X, which makes the midbass and everything below it sound a little more lean than rich. It did not play extremely loud, but it handled bass notes at a moderate volume without unpleasant distortion. When I listened to bass-heavy music like Arianna Grande's "Side to Side," a track that would make other small speakers audibly "bottom out" or otherwise distort, the Riva S provided a hint of the bass track but processed the signal to prevent it from overwhelming the speaker. This is part of the Trillium technology that manages the compression to protect the signal while also enlarging the soundstage. Needless to say, this speaker cannot reproduce any real bass--no speaker this size can. However, the Riva S will not be overwhelmed by bass notes.

Utilizing the TrueWireless function to create a stereo pair provides noticeably more volume and a real soundstage. With The Eagles "Hotel California," the drums were fairly solid and detailed, but what impressed me more was the size of the soundstage. This is where the Riva S upstages its big brother.

One other feature on the Riva S that I enjoyed using was the Party Mode, where multiple devices can send music to the Riva S: when one track ends, the Riva S plays the next one that was selected, regardless of device.

High Points
• The Riva S sounds quite good--better than its size would suggest. The all-important midrange was reproduced clearly, so vocals were nice and clean.
• The TrueWireless stereo pairing feature provides extra volume, a fuller midbass, and (best of all) a real soundstage.
• The Riva S has a Power Mode feature (similar to the Turbo X's Turbo mode) that provides a volume boost at the expense of battery life.
• The Riva iOS application can now turn on the speaker (it could not do so with the Turbo X).

Low Points
• If you leave the Riva S unplugged and forget to turn the battery off, it will slowly drain, even if the speaker is off.
• The Riva S requires its own proprietary cable, rather than a more universal IEC or USB cable.
• Playing the Riva S in Power Mode to improve dynamic ability in an outdoor environment will drain the battery quickly.

The Bose Soundlink Mini II ($200) is slightly smaller but plays louder. Compression at higher volumes is more noticeable, and it does not have stereo pairing capability.

The Fugoo ($149 to $179, depending on configuration) lets you switch out jackets--from the rugged Tough jacket to the sleeker Style jacket, in the color of your choice. I was not able to compare the Fugoo to the Riva S side by side; but, if I recall correctly, the Fugoo plays a bit louder and was more forward in the upper midrange.

I also need to mention the $200 UE Boom 2. I haven't had a chance to check out this new version, but the original Boom was quite good. The new version has an IPX7 waterproof rating, which means it can be fully submerged and still work--whereas the IPX4 rating of the Riva S means that it can be splashed from any direction but not submerged.

Conclusion
Riva has done it again. The Riva S is a good-sounding, feature-packed Bluetooth speaker. Unless you only plan to use the speaker on the go or to listen at low volumes, I would very strongly recommend getting a pair of them. With a stereo pair, the lower frequencies sound fuller, and there's a true soundstage. Riva is currently offering a deal in which you can get two Riva S speakers for just $199 (that's a $100 savings).

The speakerphone function and the ability to use the battery to charge a mobile device are added perks when using the Riva S on the road, but make sure you turn the battery switch off to avoid battery drainage when the unit is not being used.

All in all, this is a versatile and good-sounding Bluetooth speaker. If I were only going to get one unit and compact size was not important, I would probably opt for the Turbo X, which plays louder and goes lower. However, I would definitely choose a pair of Riva S models over a single Turbo X. In a world with so many portable Bluetooth speakers, it is encouraging to see speakers like the Riva S that focus on providing a better listening experience.