News, Streaming, Apps, and Downloads News
Published On: May 2, 2018

News, Streaming, Apps, and Downloads News
Published On: May 2, 2018

Roku has announced the addition of live and linear news content to The Roku Channel, which is Roku's free, ap-supported channel that offers access to a variety of movie and TV content. Starting this month, Roku owners will be able... 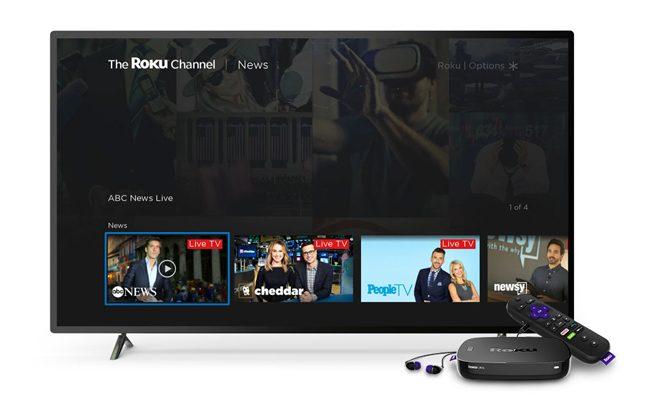 Roku has announced the addition of live and linear news content to The Roku Channel, which is Roku’s free, ap-supported channel that offers access to a variety of movie and TV content. Starting this month, Roku owners will be able to stream ABC News Live, Cheddar, People TV, and other news services. Roku has also added new features like “Collections” and “Continue Watching” (described below) to The Roku Channel.

“We built The Roku Channel so it’s easy to navigate, offers great content and brings real value to our customers,” said Rob Holmes, Vice President of Programming, Roku. “Today, we’re working with some of the industry’s most forward-looking news organizations such as ABC News, Cheddar, People TV, and others, to deliver yet another customer-requested feature to The Roku Channel–live and linear news. ABC News has been at the forefront of producing and delivering live news for OTT viewing, and we’re excited to have them on-board as one of our anchor news partners.”

ABC News Live, the network’s new 24/7 live streaming channel, will be available on The Roku Channel, giving users access to breaking news and live event coverage. It will utilize the worldwide resources of ABC News and their people in the field to deliver news in a modern package and take users live, on location to show–not tell them–what’s happening in the world.

“Now more than ever people want to find out what’s happening in the world from a straightforward news source they know and trust,” said Colby Smith, Vice President, ABC News Digital. “After experimenting with thousands of livestreams and analyzing the data, we’re excited to launch ABC News Live for younger viewers who increasingly rely on Roku and non-linear platforms for their news.”

In addition to ABC News Live, Roku users can view hours of live and linear news feeds from the following partners:
• Cheddar: Cheddar on The Roku Channel is a linear news offering featuring a selection of live and curated content from the network, which offers a unique approach to news in technology, media, and entertainment.
• PeopleTV: PeopleTV is the ad-supported streaming network helmed by PEOPLE and Entertainment Weekly. Roku customers will have unlimited, daily access to quality programming features, original series and specials, which encompass celebrity, pop culture, lifestyle and human-interest genres.

Since launching last September, The Roku Channel continues to expand its entertainment library, bringing more content from existing channel publishers, such as FilmRise, Vidmark and more to the forefront, and working with leading studios such as Lionsgate, Metro Goldwyn Mayer (MGM), Sony Pictures Entertainment and Warner Bros. and others.

ROKU OS 8.1
Starting in May, Roku OS 8.1 will deliver a number of enhanced features that add convenience and value to a customer’s streaming experience. Most notably, multicast private listening will be added to multiple devices through the Roku mobile app. The update supports up to four users on iOS or Android devices. These updates will be available to customers through a phased rollout over the course of the coming weeks.