Scott Wasser says the Roku Smart Soundbar may not be for everyone, but it's great for anyone shopping for a fantastic media streamer and simple two-channel (or 2.1) soundbar at the same time. 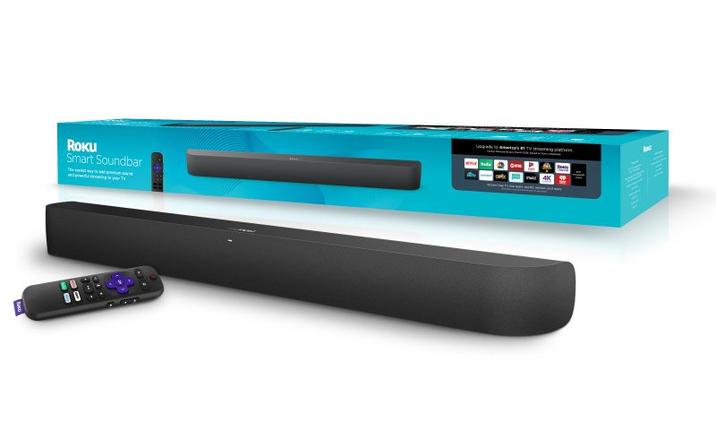 
Although it looks great, performs beautifully, has a bargain price tag and is simple to install and use, Roku's Smart Soundbar isn't for everyone. A soundbar with built-in Roku device is convenient, but if you already have a Roku, it stands to reason that you should just buy an ordinary soundbar to augment your AV system. Already have a soundbar but need a great streaming device? Get one of Roku's nine other terrific, standalone players.

But if you find yourself in need of a soundbar and new, premium streaming device at exactly the same time, boy does Roku have a deal for you. For just $180--even less if you couple it with the Roku Wireless Subwoofer--you'll get one of the best streaming players on the planet and a soundbar that will provide a dramatic audio upgrade over any flat-panel TV's built-in speaker system.

What makes Roku's Smart Soundbar "smart" is the built-in video streaming capabilities. Like other Rokus, it's part of a streaming ecosystem that delivers unsurpassed content, performance, and ease-of-use. The Smart Soundbar's player is missing a few features found on Roku's top-of-the-line Ultra: Ethernet and microSD ports, along with a headphone jack and pair of customizable buttons on the remote. But just about all of Rokus other acclaimed attributes are present and accounted for. The Smart Soundbar's player delivers the snappy performance, ease of use, unsurpassed selection of more than 5,000 channels, and rock-solid streaming (it supports 2.4 and 5GHz 802.11ac Wi-Fi) Roku is famous for.

The Roku Smart Soundbar also is so easy to set up that your grandparents will be able to do it... in about as much time as it takes grandpa to tie his favorite hiking boots. Don't overlook the significance of that. Soundbars are booming in popularity because they're the easiest way to coax better sound from a TV. The Smart Soundbar vies for the crown of the simplest to configure, despite its internal video streaming capabilities.

This is all it takes to add both the soundbar and its built-in streaming player to your TV: Plug the power cord into the soundbar and wall outlet; connect an HDMI input on your TV to the only HDMI port on the soundbar (a cable is included); be sure the TV is switched to its correct HDMI input; put batteries in the Roku remote. The remote will automatically pair with the Smart Soundbar and the TV will walk you through soundbar, HDMI 2.0a-ARC, and CEC settings. It also will help you establish a Roku account or add the Smart Soundbar to an existing one.

Adding the Roku Wireless Subwoofer, which works only with the Smart Soundbar or the Wireless Speakers created for Roku TVs, is even simpler. Connect the power cord to the sub and plug it into the wall. With the TV and Smart Soundbar on, press and hold the "Home" key on the Roku remote for five seconds to bring up the pairing menu. Select "Subwoofer," and follow a few onscreen instructions to test and adjust the sound.

My setup required one additional step. Because I used an 11-year-old Samsung TV that lacks an HDMI-Audio Return Channel, I needed to connect a digital optical cable (also included) from the TV's S/PDIF optical audio output to the soundbar's matching input. The Smart Soundbar is stereo-only, so the need for another cable is the only downside to not using HDMI for audio.

The soundbar has only one other port: a USB 2.0 connector that supports a wide array of audio, video, and even still image playback. You can also stream music from your phone to the soundbar via Bluetooth 4.2 and cast video over Wi-Fi. The limited number of jacks and absence of any switches or controls on the soundbar contribute to its simplicity and affordability. The only button on the solidly built and elegant soundbar--which measures 32.2 inches wide, 2.8 inches high, and 3.9 inches deep and weighs 5.5 pounds--is a reset switch that may never need to be used given Roku's typically robust reliability.

All the content I watched sounded fine even before I connected the Wireless Subwoofer. The soundstage wasn't especially wide or deep in my 17-by-17-foot room, but it was large enough to make the smallish bar seem to disappear. The Smart Soundbar, which delivers 60 watts of power through four 2.5-inch, full-range drivers, provided ample stereo separation, good tonal range and clear definition. I streamed a few songs from Roku's native Pandora channel and via my phone's Bluetooth from Google Play Music, and they sounded rich and detailed.

Mostly, however, I mostly listened to movies and was extremely pleased with how well the Smart Soundbar handles dialogue. The bar has two Speech Clarity modes, and I never needed to switch from Low to High. That impressed me, given that I often watch movies with subtitles turned on so I don't miss a word. The Smart Soundbar also has three Volume Modes--Off, Leveling, and Night--and four Sound Modes: Normal, Reduce bass, Bass boost, and Bass off.

The soundbar alone produced decent bass in Normal mode, but there wasn't much dramatic punch to movie sound effects, and the Smart Soundbar did little to distinguish itself with bass-heavy music. Switching to Bass Boost didn't change things dramatically, but adding the Wireless Subwoofer did. Featuring a 10-inch, down-firing driver enclosed in an 11.8-inch cube with four sleekly curved corners, the 17.1-pound sub delivers 250 watts of sheetrock-shimmying power.

Even in Normal bass mode, the sub gave music a level of heft that was missing without it and generally enhanced the presence of everything I listened to. For example, the dialogue, sound effects, and music of Disney+'s The Mandalorian sounded fine without the sub, but adding it brought the entire mix to life. Turning Bass Boost on added even more bombast to its action scenes. Music similarly benefitted from the subwoofer. In both Normal and Bass Boost mode, tunes tinged with heavy bass became more appealing and engaging than they were with the soundbar alone.

Although I don't consider the Wireless Subwoofer a necessity, it's definitely an audio upgrade and one that's hard to pass up since Roku knocks $30 off the price of each component if the sub and soundbar are purchased together on Roku.com. That pairing puts the price of the Smart Soundbar and Wireless Subwoofer at $300, which is extremely enticing for the great sound, terrific streaming experience, and ease of setup and use they provide.

As this review was being prepped for publication, Roku also announced that it's adding new functionality to the Smart Soundbar, allowing you to add Smart Wireless Surround Speakers and configure a complete 5.1-channel surround sound setup for an additional $149. More details will follow as we're able to test out this new feature.

Comparison and Competition
Strictly speaking--meaning its competition is defined as a soundbar with a built-in streaming device--there are only two alternatives to Roku's Smart Soundbar. One of them is actually built by Roku and sold exclusively at Walmart, the $130 Onn Roku Smart Soundbar. It looks identical to the bar reviewed here and should deliver the same content-streaming experience, but isn't as powerful (40 watts instead of 60) and uses different speaker drivers. It also comes with a basic, IR version of the Roku remote that lacks voice control. The Walmart soundbar also has a compatible Onn Roku Wireless Subwoofer. Subwoofer. Also $130, it is much less powerful (150 watts of peak power vs. 250) than the subwoofer reviewed here.

The other is soundbar with built-in streaming player is the JBL Link Bar. A 40-inch soundbar with Google Assistant and Android TV built in, the 100-watt Link Bar is a stereo soundbar that can be paired to a wireless subwoofer but isn't built for surround sound. The built-in Google Assistant can be convenient, but Android TV isn't my cup of tea, especially as compared with Roku.

Conclusion
Not everyone needs a soundbar with built-in content-streaming player, but the Roku Smart Soundbar is a no-brainer for those who do. It's an instant upgrade to any flat-panel TV's internal speakers, and Roku's streaming ecosystem is the best around. The Smart Soundbar might be appealing even if you already have a streaming player, if yours is a different system or an older Roku. The Wireless Subwoofer isn't necessary, but definitely enhances the sound and effectively drops the price of the Smart Soundbar if purchased with it.