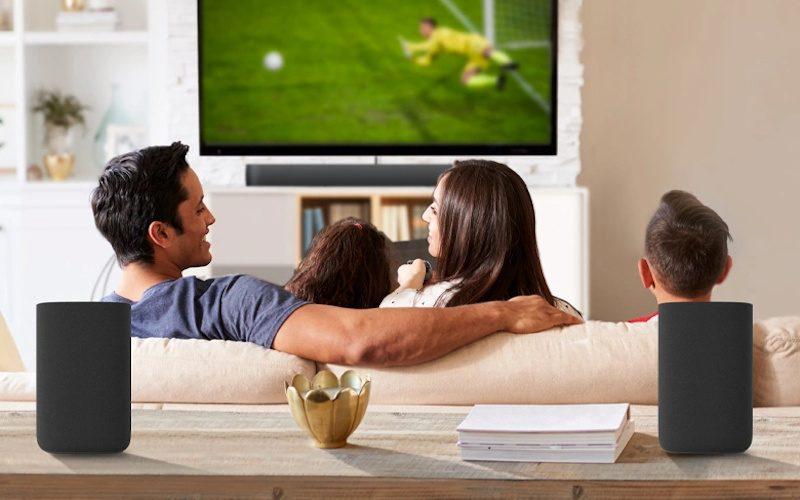 Roku's Wireless Speakers are great sounding and affordable speakers that can serve as satellites or substitute for a soundbar... but only in conjunction with other Roku gear. 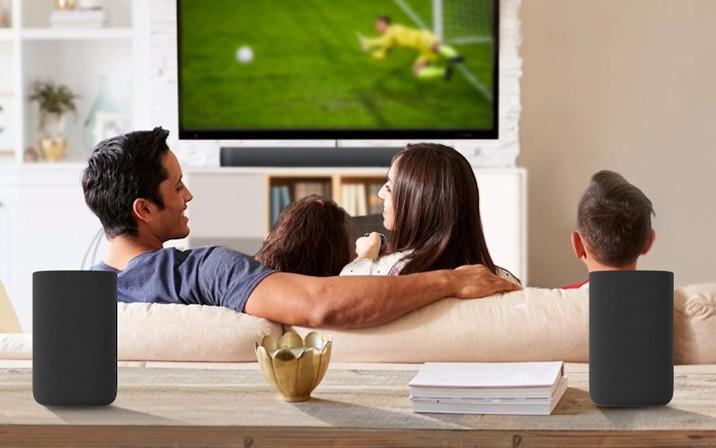 Whether it's a waiter surprised by an extremely generous tip, a salesperson receiving a bigger commission than expected, or a kid scoring an extra scoop of ice cream, everyone loves a bonus: Something above and beyond the anticipated, something more than you expected.

That was the case when I got my hands on a pair of Roku TV Wireless Speakers. Initially, I couldn't wait to test them because I hoped they would turn Roku's Smart Soundbar and Wireless Subwoofer ($180 each) into an affordable and sweet-sounding 5.1 surround system. They definitely did that.

What never occurred to me until after I began testing that system, however, is that I'd appreciate the $200 Wireless Speakers for much more than the way they complemented Roku's other components. I was so focused on turning the previously reviewed soundbar and sub into a surround system, I'd completely forgotten the Wireless Speakers had been introduced about a year earlier for a totally different purpose.

And that turned out to be a bonus I hadn't expected.

If you're unfamiliar with Roku's audio products, you might be scratching your head at this point, wondering why Roku would come out with satellite speakers a year before introducing a soundbar to which they could be connected. To spare your scalp, here's the scoop: The Wireless Speakers were initially introduced in the fall of 2018 as a simple and proprietary way to get better sound from Roku TVs. They were an alternative to conventional soundbars for the dozen television brands that use Roku's operating system.

But they only worked with those TVs. In other words, you couldn't connect them to non-Roku televisions or any other components or devices, including Roku streamers. That changed about a year later, last fall, when Roku released its Smart Soundbar and Wireless Subwoofer. Connect the Wireless Speakers to the Smart Soundbar, and you've got a 5.0 surround system. Throw in the Wireless Subwoofer, and it becomes a true 5.1 system that sounds terrific and is reasonably priced. If you've got a Roku TV, you also can create a 2.1 system by connecting only the subwoofer and satellites to it.

More about the connectivity options shortly, but first let's pause to discuss how easy Roku makes it to install its audio components. Simply put, Roku sets the standard for easy audio setup. If any manufacturer has a right to claim its devices are plug-and-play, it's Roku, and its Wireless Speakers are a perfect example. The process is the same whether they're being connected to a Smart Soundbar or a Roku TV: If that's not easy enough, Roku also helps set the standard for online support. In the case of the Wireless Speakers, the Support section of the company's website provides a comprehensive Q&A section crammed with helpful information, along with a 16-minute video that thoroughly explains what the satellite speakers can do for you and how to connect them.

I first tested the Wireless Speakers as satellites with the Smart Soundbar and Wireless Subwoofer. The 4-pound speakers have some heft to them and were about the size of a 36-ounce bag of coffee or small loaf of bread (they measure 7.7 inches high by 4.9 inches wide and deep). Each cabinet contains a 3.5-inch woofer and a 0.75-inch tweeter, and the cabinets are small enough that they fit easily on the cluttered end-tables flanking the sofa in my media room. If I wasn't the only one who uses that couch and didn't sit on its center cushion, I would've mounted the speakers on the wall using the quarter-inch threaded sockets integrated into the rear of their cabinets. That would've been a better location for optimum surround sound, but the Roku Wireless Speakers nevertheless sounded great on the tables. The surround effects were obvious as soon as I played my first two demos, The Mandalorian on Disney+ and Midway on HBO Go. After first listening to the Smart Soundbar and Wireless Subwoofer alone, the effect of the surrounds was palpable. The Mandalorian's intro theme alone immersed me immediately, and the satellites turned me from a distant observer to someone trapped in the carnage around me as Japanese planes strafed and bombed Pearl Harbor.

I was impressed with the imaging of the Wireless Speakers. The left and right rear channels clearly distinguished themselves. By the time I finished listening to other movies and a bunch of music, I was convinced that the software update Roku released a few months ago – which enabled the Smart Soundbar, Wireless Subwoofer and Wireless Speakers to work together – turned that combination into an effective, affordable, and very appealing 5.1 sound system. For those who have only a Roku TV, the speakers are also quite effective at achieving their original purpose of improving the sound of a television. As noted earlier, I was so enamored with the idea of turning Roku's soundbar and sub into a complete surround-sound system I initially forgot to check the satellites out on my inexpensive TCL 49S403 Roku TV. Turns out there were several reasons I was glad I didn't.

The first was obvious as soon as I connected the speakers to the TV with virtually the same quick and simple process used to connect them to the soundbar and sub. The upgrade in audio fidelity provided by the Wireless Speakers was evident from the moment they were connected. The TV just happened to be tuned to news channel, yet the speech clarity, overall fidelity, and tonal range were dramatically better than the old soundbar they replaced. Soon, I also realized how much better imaging the Wireless Speakers also delivered. Not being constrained by the 36-inch soundbar cabinet enabled me to place the speakers about 5 feet apart, which seemed to be the sweet spot for great stereo separation along with dialogue that seemed centered on the screen. Ease of operation turned out to be another big bonus provided by the Wireless Speakers. My old soundbar is so old it doesn't have an HDMI input, so I'd been using an optical cable to feed it audio signals from the TV. Not having Consumer Electronics Control (CEC) switching capability meant I also had to turn the soundbar on every time I watched TV. Sometimes, the soundbar didn't even recognize the optical cable's input. Roku's Wireless Speakers eliminated those problems, which might seem like a very minor annoyance unless you've just started cranking on your spin bike and are trying to hear what you put on the TV. But now when I turn on the TV, Roku's Wireless Speakers wake up and soon (see Low Points for a qualifier) start playing. Wow! I can actually begin streaming something and start pedaling knowing I'm not going to spend the next five minutes searching for sound.

The other major reason I fell in love with the Wireless Speakers as my new audio companion to the TCL TV is the remote mentioned earlier. Because it connects to my TV by WiFi, I don't have to point it when I change channels, raise the volume or turn captions on (a frequent occurrence while watching Bank Heist on Netflix). If you're wondering why that's a big deal, you've never had to do any of those things while standing up on your spin bike. Also, remember those basic voice commands I mentioned earlier? They're still not nearly Google Assistant or Alexa-caliber, but Roku keeps expanding its voice-command library. It's hard to describe how convenient it is while exercising to simply hold down a button and say, "Play Hamilton on Disney+," instead of navigating through several menus.

I found it interesting – but so far not particularly useful – that the Wireless Speakers come with a second remote that Roku calls a Touch tabletop remote. Measuring 3.15 inches square and 0.9 inches thick, it's intended to be used from another room (you've already got the primary remote where the Roku streamer is located, right?) to play Pandora, iHeartRadio, and TuneIn content from a Roku streaming device. It connects to the device via WiFi and accepts voice commands. I suppose some people might be thrilled with it and consider it another bonus delivered by Roku's Wireless Speakers. But I frankly had so little use for it I never inserted the batteries.

Comparison and Competition
Since they're capable of working only with Roku TVs and soundbars, the Wireless Speakers really have no competition other than the Roku-made Onn Wireless Speakers sold by Walmart. Those have a lower regular price ($150) but don't come with the tabletop remote. We weren't able to determine how the drivers (published for the Roku, but not for the Onn) or power output (published for the Onn but not the Roku) compare on the two models.

Conclusion
I'm as impressed with the Roku Wireless Speakers' ability to perform double-duty as I am with the way they perform. I've also mentioned several times how easy they are to set up and use, but that's probably a factor you can't overemphasize considering the non-techy customer these speakers are primarily aimed at.

For a company that is relatively new to home audio, Roku has consistently met and often exceeded my expectations. Its Wireless Speakers are another example of that.