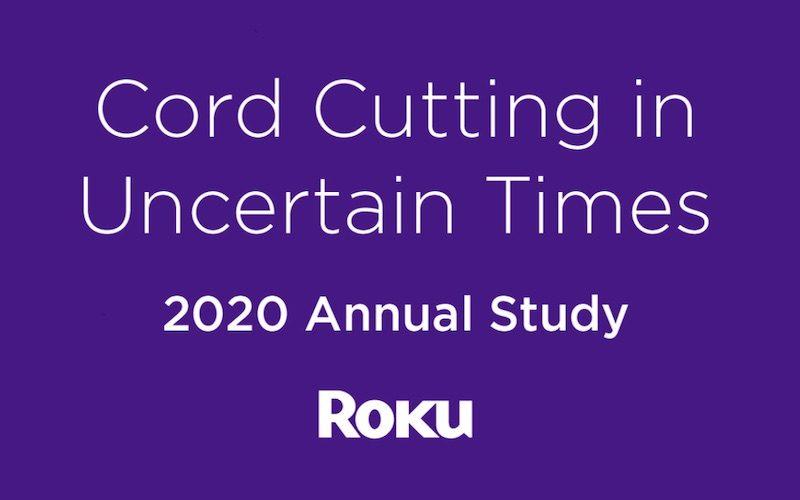 News, Streaming, Apps, and Downloads News
Published On: July 24, 2020
We May Earn From Some Purchases Via Affiliate Links

Still clinging to your paid TV and cable subscription? Roku says you might be part of a dwindling minority. According to findings of its annual Cord-Cutting Study, 32 percent of U.S. TV households don't have traditional pay TV and 25 percent of those who do are cutting back on their services. The study also indicated that 45 percent of those "cord-shavers" expect to switch exclusively to streaming within six months.

Additional Resources
• Visit the Roku Blog for more insight behind the study.
• Take a look at the annual study.
• Read Best Media Streamers for 2020, Streaming Media Boxes and Sticks at HomeTheaterReview.com.

Here are more details and insights from Roku's latest study:

Roku, Inc. today announced findings from its annual Cord Cutting study, including new insights shared by U.S. consumers about how the COVID-19 pandemic is influencing the shift to streaming. The study found that approximately 32% of U.S. TV households do not have a traditional pay TV subscription (cable, satellite, telco), while another 25% of households identified as Cord Shavers cut back their service. When asked about intent to cut the cord fully in the next six months, 45% of Cord Shaver households said they were likely to do so.
"While we entered 2020 with significant momentum around cord cutting, we're now seeing that the COVID-19 pandemic and the pause of live sports has caused consumers to rethink how they access home entertainment and what they are willing to pay," said Roku Chief Marketing Officer Matthew Anderson. "It's clear that value matters more than ever and the abundance of free content, free trials to premium streaming services and the savings that consumers achieve are fueling the shift to streaming."

Recent Roku Cord Cutter Households Claim Approximately $75 Savings Per Month
The vast majority of Cord Cutter households agree that they are satisfied with their decision and wish they had cut their traditional pay TV service earlier. When asked about factors driving the shift to full-time streaming, cutting home entertainment expenses was cited as the No. 1 reason. Roku users who cut the cord said they saved approximately $75 per month, a higher average savings than cord cutters who said they use other streaming devices.

Nearly Half of All U.S. TV Households Say They Stream More Free TV Amid Pandemic
Value is an important factor in driving cord cutting. Nearly half of all U.S. TV households said they have been watching more, free ad-supported TV during the COVID-19 pandemic than they did before. In addition, 40% of recent Cord Cutter households say that access to free trials and extended free trials to premium subscription services helped convince them to cut traditional pay TV service.

Methodology
This year's Cord Cutting survey was conducted by MACRO Consulting, Inc. on behalf of Roku Inc. 7,000 Americans ages 18 and over were surveyed in March 2020 about their TV household, followed by 2,000 Americans ages 18 and over in May 2020 to understand changes amidst the COVID-19 pandemic. More Cord Cutting insights can be found on The Roku blog.

You'll automatically be entered in the HTR Sweepstakes, and get the hottest audio deals directly in your inbox.
Subscribe
Connect withD
Login
Connect withD
0 Comments
Inline Feedbacks
View all comments
Check Product Price
This is the static ad content. This is just a placeholder for now to get things styled.
Visit Website