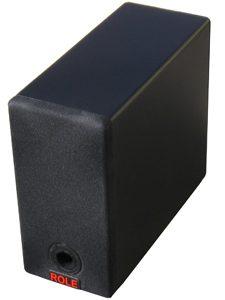 Audio Reviews, Bookshelf Speaker Reviews, Equipment Reviews
Published On: May 18, 2016
We May Earn From Some Purchases Via Affiliate Links

Steven Stone reviews the Sampan FTL bookshelf speaker from Role Audio. This small, ported speaker uses a single full-range driver and claims a frequency response of 40 Hz to 20 kHz. Read on to see how it performs.

The Role Audio website claims that the company makes “the best small speakers.” While I’m sure some other manufacturers might take issue with that statement, over the years I’ve reviewed several of their designs–all small, and all able to produce a high level of musicality. One of the company’s smallest loudspeakers is the Sampan FTL ($1,195/pair in satin black). Designed for use either on a desktop, in a bookshelf, or even on speaker stands in a modestly sized room, the Sampan FTL promises to deliver a big, full sound from a mighty tiny box. Does it succeed? Let’s see.

Role claims that the Sampan FTL has a bandwidth from 40 Hz to 20 kHz. If that figure isn’t amazing enough, it does so with a single full-range driver. The driver is 3.5 inches in diameter with a cast rather than stamped frame, neodymium magnets, and an under-hung motor assembly. The internal volume of the Sampan FTL is approximately 0.1 cubic feet, but its transmission-line interior that terminates with a front-firing, specially tuned port reduces cabinet resonance while augmenting its bass response. The transmission line is approximately three feet long, which means that the inside layout of the Sampan FTL is far more complex than a typical box speaker.

Since the Sampan FTL uses a single full-range driver, there’s no crossover needed to blend drivers. Also, without a crossover, there’s no phase shift at the crossover point, making the overall sound more coherent than a vast majority of multi-driver loudspeakers.

Ergonomic Impressions
Setting up the Sampan FTL was simple on my desktop. I put them on top of a pair of isoAcoustics stands with their taller columns installed. That put the center of the Sampan FTL’s driver two inches below my ears. I recommend placing the Sampan FTL within three inches above or below ear height in a nearfield or midfield setup for optimum imaging. Not only will the image focus improve, but you will reduce the “floor bounce” from your desktop. I use a half-inch-thick felt pad covered by a nice, thick Persian rug to knock “desk bounce” down still further in my nearfield system. Rather than have the speakers facing straight ahead, I found an angle of between 10 and 20 degrees towards center gave me the most cohesive and well-integrated soundstage from left to right.

If you favor shiny, slick, metallic finishes, the Sampan FTL Henry Ford “any color as long as it’s black” satin may not appeal to your higher design sense. Fortunately, the Sampan FTL is also available in white. If you prefer that loudspeakers not be the most prominent architectural feature in a room, you will enjoy the Sampan FTL’s understated looks.

Sonic Impressions
The ultimate compliment that a recording engineer can pay to a set of speakers is the simple phrase, “I could mix on these.” When set up on my desktop, the Sampan FTLs delivered a level of fidelity, finesse, and soundstage accuracy that approached what I’ve been hearing from my current desktop reference, the Audience 1+1 loudspeakers. The Audience are also a single-driver design; but, instead of a transmission line to augment their bass, the Audience speakers use passive drivers that act like large, controlled pressure ports. Obviously, both methodologies can be used to successfully augment bass response.

As you would expect from a single-driver design, the Sampan FTLs image with superb specificity. With well-recorded material, I could tell exactly where each instrument resided in the soundstage. Also, the Sampan FTLs did a fine job with layering and depth retention. On my own recording of Brahms’ Requiem, it was clear that the chorus was well behind the soloists. The Sampan FTLs’ soundstage size was comparable with that of the Audience 1+1 loudspeakers, as was their dimensionality and imaging.

Even when using these speakers as nearfield monitors, I recommend a subwoofer. It needn’t be a big subwoofer; I used the Aperion 8B subwoofer with the Sampan FTLs, and they worked together nicely. The Aperion delivered the weight below 70 cycles (I used a 60-cycle crossover point). while the Sampan FTLs rolled off smoothly into the sub’s range.

Low Points
• The cosmetics may be too understated for some.
• Finding a suitable stand for desktop use may be a challenge.
• A subwoofer is needed to make the Sampan FTLs thrive as a full-range system.

Competition and Comparison
Up until about a month ago, I had a pair of Audience’s smallest loudspeaker, The One, which is priced at $995. Relying on aural memory, I feel the Sampan FTL is certainly competitive with it. The Audience speaker has nicer cosmetics and a touch more finesse in its sonic presentation, but the Sampan FTL has a more bass energy and better power-handling capabilities.

I’ve used the Role Kayak ($795) as one of my small-footprint reference loudspeakers for a number of years. While the Sampan FTL images more precisely in a desktop setup, the Kayak can play louder and go deeper with no signs of distress, which makes it a better loudspeaker for a room-based system, or for someone who likes to play their music loud.

Conclusion
The Sampan FTL proves that a small-footprint, single-driver loudspeaker can perform at a very high level when used in a nearfield setup, where its virtues can shine. If I were looking for a loudspeaker for a high-performance desktop monitoring system, I would definitely put the Sampan FTL on my “must-audition” list. When coupled with a subwoofer and placed so that they are at approximately ear height, the Sampan FTLs are good enough that I could easily use them for mixing or mastering. They are also so light and small that you could easily use them as on-location nearfield monitors, as well. Combine the Sampan FTL’s sonic virtues with the fact that they are U.S.-made, have a 10-year warranty, and use cabinets that do not contain formaldehyde, and you have a high-value loudspeaker that can compete with any small-footprint loudspeaker currently available.