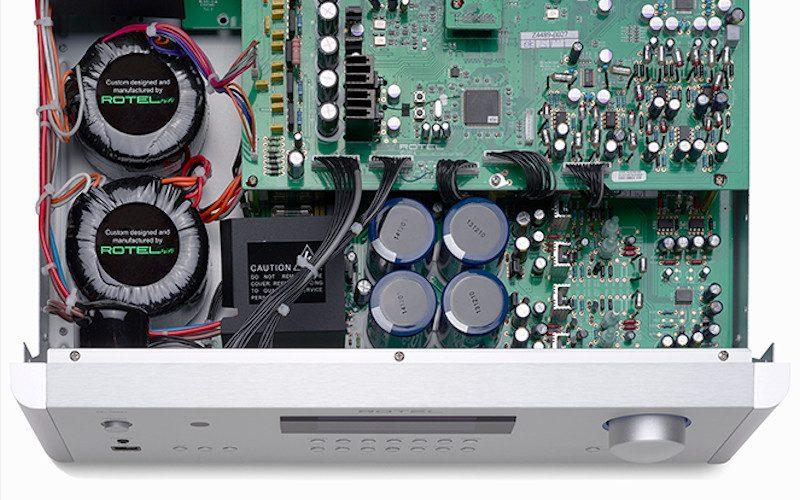 When doing an audio product review, I make an effort to learn some history about the manufacturer, and I was surprised by what I discovered about Rotel. Based in Zhuhai, China, Rotel has a 50-year history of making high-end audio equipment and is a family business, which has been in a lasting partnership with B&W for product distribution. Years later, their relationship would extend to a factory-sharing agreement. Yes, Rotel has a factory, since the company actually manufactures its products, as well as many of the parts that go into its products. While this may not sound astonishing, you may be surprised to know how many companies use a third-party vendor to manufacture their product designs. Now, I have no problem with that business model. I get it. Remember, Foxconn manufactures the iPhone for Apple, so we know it can work. Some of my favorite audio equipment is third-party produced; still, when I hear that a company does the design and manufacturing, I can't help but be impressed. Manufacturing your own products does not guarantee superiority, but let's see how it affects two of the newest products from Rotel.

The Rotel RC-1590 stereo preamplifier and RB-1590 two-channel amplifier are optimally designed to function together as a high-end two-channel audio system (although you could certainly use them separately with other components, too). Keeping the preamplifier and amplifier sections separate is considered superior for decreased noise and better channel separation, with the benefit of independent power supplies. Each unit has an extruded and anodized aluminum faceplate. The combination can be purchased n black (like my review samples) or silver. A blue LED ring surrounds the power button on both units, which glows when they are powered on.

Rotel's philosophy, which is referred to as the Balanced Design Concept, is to combine component selection, circuitry design, and final listening evaluation in balance to achieve an outcome that is greater than any one of these criteria could achieve individually. In those instances where Rotel does not manufacture the component itself, the parts are sourced from all over the world, including Germany, Britain, Japan, and the United States. Like many Rotel products, a high-performing power supply is center stage in these two products. Twin homemade toroidal transformers are part of the power supply design, for both the preamplifier and amplifier.

The RC-1590 is a modern-day preamplifier, meaning it possesses all the digital and wireless inputs you would imagine. A PC-USB input feeds the AKM premium 32-bit/786-kHz DAC, where DSD (PC-Windows) and DoP (DSD over PCM for MAC computers) are also supported. A Bluetooth input, along with the required antennae, benefits from aptX. An emphasis on keeping noise out of the system is accomplished by isolating the digital inputs and by using low noise circuitry for the analog inputs. As I previously mentioned, the power supply is paramount, and it is made with slit foil capacitors for their fast charge and discharge capabilities. A front-panel USB input for iOS devices makes this preamplifier compatible with an iPhone or iPad.

You also get three optical and three coaxial digital inputs, as well as one optical and one coaxial digital output. The RC-1590 has four traditional RCA line-level inputs, including a moving magnet phono stage input, and one balanced input. Two sets of balanced outputs, two sets of line-level outputs, and two RCA subwoofer outputs, plus an additional fixed-level RCA output, keep your connection options open. RS-232 and IP control allow for system integration, while an external remote input allows for a wired infrared receiver. Two 12-volt triggers control other components to simultaneously power on and off the amplifiers or other components. A Texas Instruments integrated circuit allows for precise volume control, and a front-panel headphone output is located on the lower left of the faceplate. Worth mentioning is the input selection, which is possible via direct access by individual buttons located front and center on the faceplate, a nice feature in a jog-wheel world. The RB-1590, meanwhile, is a two-channel Class AB amplifier boasting 350 watts of continuous power per channel at eight ohms, with both channels driven, in a dual mono design--basically, that means the RB-1590 is two mono-block amplifiers sharing the same case. Again, Rotel paid special attention to the power supply, with homemade toroidal transformers. The capacitors are custom, of high quality, and sourced in Britain. Both line-level RCA and balanced inputs are provided, along with dual right and left speaker outputs for easy biwiring. Total harmonic distortion (THD) is less than 0.03 percent (20 Hz to 20 kHz). Frequency response is 10 Hz to 100 kHz, and the signal-to-noise ratio is 120 dB. The RB-1590's dimensions are 17 inches wide, 9.75 inches high, and 19.9 inches deep, with a weight of 84 pounds. The heat sinks are internal to the main case. My first impression was that this is a lot of hardware for $2,999.

The Hookup
I connected the RC-1590 preamplifier to the RB-1590 amplifier using balanced interconnects. For speakers, I used B&W CM10 towers. For sources, I used a Lyngdorf CD-2 drive connected by a coaxial digital cable, and I played files from my MacBook Pro using both USB 2.0 and Bluetooth.

Performance
First, I streamed music from Tidal, using my MacBook Pro connected by USB. I bounced around various artists and settled on Natalie Merchant's song "Carnival" (Elektra). I heard an excellent level of texture, warmth, and detail without over-analysis. The RB-1590 had total control over the CM10s, which require some power to move. I never noticed distortion on the bottom end; rather, it was controlled and authoritative. High frequencies were uplifting, and the midrange was not neither forward nor laidback. Natalie's voice had great texture; there was a very natural character to her smooth voice. Instruments had presence and realism. Imaging was excellent in both width and depth.

Next, I played the same music over Bluetooth and got noticeably different results. It still sounded good; but, in comparison with the wired connection, the sound was a bit thin, with a touch of rigidness to the upper frequencies.

I moved on to the Gypsy Kings through USB, with their song "a Ti a Ti" (Columbia). The Rotel combo delivered their acoustic guitars with exceptional detail, with weight in the midrange that created an exceptionally realistic sound. Vocals were visceral and displayed the raspy character of the lead singer's voice. The percussion had an uncanny timber that stood out and is best described as "alive." My listening room is on the smaller side, at 13 feet by 14 feet. So, the speakers are somewhat closer to me than I am used to, placed nine feet apart; yet they still imaged very well, and I could hear a clear center stage, along with excellent width and depth. I was no longer looking at the speakers but in between them, as they disappeared into the soundstage.

the gipsy kings - a ti a ti

Lastly, I played the song "Oh Well" from Sarah K. Her vocals sounded very natural as they projected into the room, while the background was silent, making evident the high quality of this recording.

I also connected the Lyngdorf CD-2 through the balanced analog inputs, which offered similar if not identical performance as the digital path. I continued to listen to various songs, through Tidal and CD. All sources sounded spectacular, although CD playback from the Lyndorf had a definite advantage with increased soundstage and depth.

The Downside
The RC-1590's remote control is rather bulky and has plastic construction, but at least its layout is well organized. In the end, it does its job, but its quality doesn't necessarily match the rest of the system.

One balanced input is nice, but two would be better. Also, inputs are not customizable. For example, if you connect your Oppo BDP-105D to the RC-1590's XLR balanced input, you can't custom-label the input to say "Oppo" on the front-panel display.

Finally, although the RC-1590 has two subwoofer outputs, the preamp lacks built-in bass management, meaning that low-frequency cutoff must be controlled through the subwoofer.

Comparison and Competition
There's no shortage of two-channel preamplifier/amplifier stacks on the market today. The challenge is finding one with a similar price and performance level as the Rotel RC 1590/RB 1590 combo. Stacks like this tend to be two or three times the price.

NAD offers the Masters Series M12 stereo preamp ($3,499) and M22 stereo amplifier ($2,999) for a combined price of $6,498. I don't have firsthand experience with these particular products, but my overall experience with NAD has been nothing short of spectacular.

The Bryston BP 17 preamplifier ($3,750) and 4BSST2 stereo amplifier ($4,995) have a combined price tag of $8,745, which is almost double the Rotel combination. The Bryston preamp lacks the DAC and Bluetooth input, which makes the product seem a bit prehistoric for me. However, the company's amplifier quality is incredible, in my experience.

Cambridge Audio's AZUR 851N preamp/player ($1,799) and 851W stereo amplifier ($2,499) is competitively priced against the Rotel combo. The 851N combines a preamp, DAC, and digital music player with wireless streaming capabilities, but it does not offer analog inputs.

There are other stereo preamp/amp combos I could name. However, the more I looked, the more I realized how special this Rotel stack really is. Finding a stereo preamplifier with a Bluetooth input or some other means to stream wirelessly is difficult, although I'm sure this will change over time.

Conclusion
The Rotel RC-1590 preamplifier and RB-1590 amplifier are an impressive duo. The more time I spent with them, the more I grew to love them. The RC-1590 has a comprehensive set of modern inputs, supporting digital sources of both the wired and wireless variety. I could easily grab my MacBook Pro, log into Tidal, and instantly enjoy an incredible array of music. Streaming from my iPhone via Bluetooth was flashy and fun to demonstrate to friends. It's like having a Jukebox in your hand. All of this input flexibility and convenience, combined with the duo's excellent performance, comes with a price tag that's tough to beat. I learned quite a bit about Rotel during this review, and all I can say is that the company has made a fan out of me.