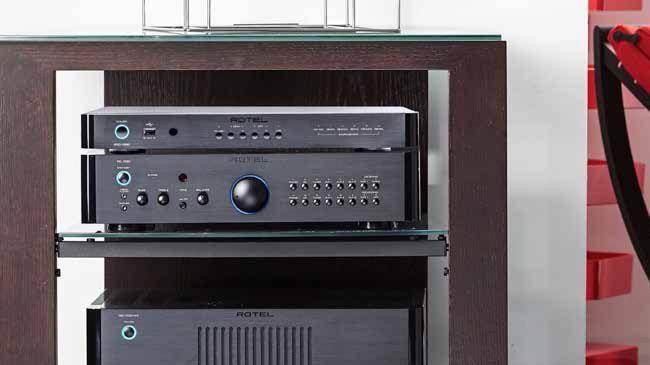 Anyone who has purchased a digital-to-analog converter (DAC) or DVD player during the last 10 years knows the prices for high-performance digital products have been steadily coming down. Four thousand dollars used to be the magic number needed to obtain...

Anyone who has purchased a digital-to-analog converter (DAC) or DVD player during the last 10 years knows the prices for high-performance digital products have been steadily coming down. Four thousand dollars used to be the magic number needed to obtain a top-performing DAC. Then $2,000 DACs like the Wyred4Sound DAC-2 and Benchmark DAC2 made that price a “sweet spot” for high-performance DACs. Recently I’ve listened to a number of $1,000 DACs – such as the Lindemann USB-DAC 24/192 and NuForce DAC-100, with sonics that easily rival older and far more expensive DACs. Now Rotel is attempting to bring state-of-the-art digital performance to the under-$800 price range with its new $799 RDD-1580.

Designed to serve as a digital hub, the RDD-1580 has a multiplicity of inputs, including two RCA S/PDIF, two Toslink, and two USB inputs. One of the two USB inputs is located on the front panel and supports a digital signal from an iPhone, iPad, or iPod (it will also charge the connected iDevice). The USB connection on the rear panel supports USB 2.0 protocols and comes with a dedicated driver on a USB key for Windows PCs; Macs are plug-and-play for any PCM bit rate and format via USB up to 24/192. The Rotel RDD-1580 does not support DSD. In terms of analog outputs, the RDD-1580 has one pair of single-ended RCA and one pair of balanced XLR, both of which are always active.

The RDD-1580’s physical footprint is only 1.75 inches high, 17 inches wide, and 12 inches deep. Available in either brushed silver or matte black, the front panel has a large on/off button on the extreme left, six source-selection buttons topped with blue LEDs in the center, and six sample/bit-rate indicators on the extreme right. An illuminated bright blue circle surrounds the on/off button. For users who find the blue circle of light too bright, Rotel supplies a little plastic ring you can place over the circle to reduce its brightness. The RDD-1580 comes with a nine-inch-long, wand-like remote control, which you can use to turn the RDD-1580 on and off and select a source. The remote also supports other Rotel devices, such as a CD player, with controls for play, stop, pause, fast-forward, and reverse. The remote is relatively large, with two-thirds of it being empty real estate. On the plus side, it’s hard to lose, but all of its functions could have easily fit onto a credit card-sized remote.

Inside the RDD-1580 is a pair of Wolfson WM8749 DAC chips. By using one DAC for each channel, Rotel gets lower noise and distortion figures than by using a single chip for both. Rotel also developed its own custom digital filter array and output stage circuits for the RDD-1580. According to Rotel, “The carefully tuned analog section is another example of Rotel’s award-winning Balanced Design approach in which specifications alone do not dictate which electronic parts are selected. Rather, extensive listening tests are carried out under controlled conditions to determine the optimal choices. During this time the entire circuit is carefully tuned to provide musically true signal reproduction … After this, the entire circuit is tuned to extract the most sonically accurate signal possible.” The power supply is also tightly regulated and uses a toroidal transformer, as well as special slit-foil capacitors to ensure greater operating stability. For its USB inputs, Rotel employs an asynchronous connection scheme to reduce digital jitter and clock-based distortions.

The Hookup
During the review period, the RDD-1580 worked with almost no glitches. My Mac’s MIDI audio control panel immediately recognized the RDD-1580 when I connected a USB cable between the RDD-1580 and my MacBook Pro. All sample-rate options up to 24/192 were available. The front-panel USB connection worked with both my iPhone 5 and iPod Touch, with no issues playing or recharging the devices. The RDD-1580’s remote control also worked without any issues, as did the front-control buttons and indicators.

The only ergonomic issue I experienced with the RDD-1580 was that a delay often occurred when I switched from the front-panel iDevice USB port to the rear-panel USB 2.0 port. Sometimes I had to switch back and forth more than once to get the RDD-1580 to begin passing a USB 2.0 signal. Also, whenever I switched from the front-panel USB to the rear panel USB 2.0, my Mac’s iTunes playback software would go into pause mode. While not a big deal during normal use, if you want to try to compare a track playing through your portable iDevice with that same file being played back through your computer, the delay will make that comparison more difficult.

Click on over to Page 2 for the Performance, Downside, Competition and Comparison, and Conclusion . . .

Performance
The Rotel RDD-1580 ranks as a very good-sounding DAC. Unlike many DACs built to a lower price point, the RDD-1580 doesn’t look or sound cheap. I was impressed by the RDD-1580’s dynamic acumen on all sources. Whether playing a large orchestral composition or a solo recording, the RDD-1580 retained the dynamic differences on both macro and micro levels. All too often, budget components can sound “nice,” but lack the dynamic incisiveness to overcome an overall “grayness” or dynamic homogenization that reduces the differences between various tracks.

The RDD-1580 produces a large, three-dimensional soundstage with pinpoint lateral focus. On the 24/44.1 version of Lorde’s “Royals” from HDTracks, each chorus member’s voice has its own unique location in the mix. Through the Rotel, the varying reverb tails for the percussion and vocal parts are also quite obvious. On the new high-resolution 24/192 version of the Grateful Dead’s “Box of Rain” from HDTrack’s Complete Studio Album Collection, the RDD-1580 reveals the added sparkle and quack from Jerry Garcia’s Fender Stratocaster, along with the greater decipherability of the background vocals. Like other better DACs that I’ve heard, the RDD-1580 makes it easy to listen deep into the mix. On “Sugar Magnolia,” you can hear the small differences in the phrasing and delivery of the harmony vocalists. On prior releases, these voices blended into a slightly sloppy amalgam rather than a collection of individual parts that merge together while retaining their individuality.

Electronic grain can add a subtle but pervasive artificial texture to music. Perhaps one of the reasons it’s so easy to listen “into” the RDD-1580 is its lack of additive electronic grain. On all-acoustic recordings, such as my own live workshop recordings of Chris Thile, Chris Eldridge, and Gabe Witcher, the mandolin, guitar, and violin textures were completely natural, with no added electronic texture or grain.

Analog fetishists usually blame digital “hardness” during dynamic peaks as one of the reasons why they find analog to be a superior-sounding medium. The RDD-1580 reminds me of the Musical Surroundings MYDAC II, in that it lacks a hard digital edge during both quiet passages and dynamic peaks. On my own concert recordings, some of which have as much as a 40dB range between the loud and soft passages, the RDD-1580 never became mechanical-sounding or stressed during dynamic peaks.

Nowadays, it’s hard to find a new DAC with a seriously or intentionally skewed harmonic balance. The vast majority of DACs are designed to have a harmonic balance that sounds as neutral as possible, and the RDD-1580 is no exception. But despite the goal of absolutely neutral harmonic balance, very few components fall exactly on the razor’s edge of perfect neutrality. In the RDD-1580’s case, I found its overall harmonic balance erred slightly to the warm side of neutral. Its upper midrange was slightly less prominent than the Mytek 192/24 DAC/Preamp and reminded me of the new Sony HAP-Z1ES network player’s more mellow harmonic presentation.

Bass definition and extension through the RDD-1580 were certainly on a par with other DACs I’ve used recently. Choose any cut from the HDTracks’ 24/88 download version of Daft Punk’s Random Access Memories, and the RDD-1580 will reward you with rollicking, powerful, yet well-defined bass. On Fred Redekop & Jay Taylor’s As Julia Ponders…, the RDD-1580 does a superlative job of retaining all the detail on both the leading and trailing edges of Taylor’s electric bass.

The Downside
The principal shortcomings of the Rotel RDD-1580 are ergonomic rather than sonic. The first issue is that the RDD-1580 does not support DSD in any way, shape, or form. If you crave a DSD-capable DAC, the RDD-1580 will not scratch that particular sonic itch.

Unlike many USB DACs that include a preamp section to adjust the output volume, the RDD-1580 has only a fixed output level. You will need to use the RDD-1580 in combination with something that has volume controls, be it an AV pre/pro, receiver, powered speakers with built-in level controls, or a two-channel preamp. Also, the quality of your preamp or volume-adjustment device will have a direct impact on the RDD-1580’s perceived sound quality.

As I mentioned, when the input is switched from the front-panel USB iDevice input to the rear panel USB 2.0 input, there was a delay in the switchover, and occasionally I had to switch to another input before going to the USB 2.0 to ensure a connection. Also iTunes defaulted from “play” to “pause” whenever the USB 2.0 input was selected.

Competition and Comparison
USB DACs come in all shapes and sizes, from small, portable single-input devices that are slightly larger than a lipstick tube – such as the AudioEngine D3, AudioQuest Dragonfly, and Resonessence Labs Herus – to full-sized, multiple-input desktop units like the Rotel RDD-1580. Although the sonic differences between the excellent-sounding Herus and the RDD-1580 may be slight, the RDD-1580 does offer greater input flexibility and more output options. The only feature that the RDD-1580 does not offer is the Herus’ DSD compatibility.

The Cambridge Audio DacMagic Plus ($679 MSRP, $500 street) uses a pair of Wolfson WM8740 DAC chips rather than the Wolfson WM8749 chips found in the RDD-1580. The DacMagic Plus does offer a few features that the RDD-1580 lacks, including a headphone amplifier and built-in volume level controls, but it lacks the dedicated digital iPod input connection.

The Mytek Stereo192-DSD DAC ($1,595) delivers far more flexibility, including a FireWire connection, powerful headphone amplifier, preamp functionality, DSD support, and adjustable digital filters and upsampling. What the Mytek does not do is deliver a substantially better sound. Some audiophiles might prefer the Mytek’s more prominent upper midrange, while others will enjoy the Rotel’s more laidback presentation but, for double the price, the Mytek’s advantages are primarily ergonomic rather than sonic.

Conclusion
The primary reason an audiophile buys an $8,000 DAC rather than an $800 one is because, in theory, the $8,000 DAC delivers better sonics. While I won’t dispute that an $8,000 DAC can be a stunningly beautiful object, I’m beginning to wonder if the law of diminishing returns has reduced the sonic differences between three- and four-figure DAC devices to the point where it makes sonic as well as financial sense to buy a new under-$1,000 DAC every couple of years rather than an over-$5,000 DAC every decade. If your current or former state-of-the-art DAC is getting long of tooth, rather than knee-jerk replacing it with another megabuck DAC, you might want to give the Rotel RDD-1580 DAC a try. It will surprise you.