RTI has introduced a new flagship two-way system controller, the T3x, which combines a fully customizable 3.5-inch LCD touchscreen with programmable hard buttons, grip sensors, and a built-in camera and microphone. The T3x supports control via IR, RF, ZigBee, and... 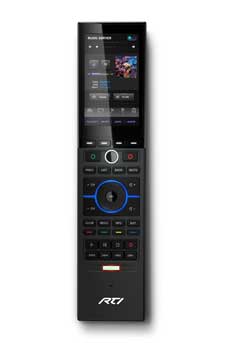 From RTI
Remote Technologies Incorporated (RTI) has announced that the company is now shipping its next-generation T3x wireless controller. Part of the company's award-winning automation portfolio, the T3x is loaded with advanced features that will take the user experience to new levels through unmatched simplicity and convenience. The powerful, two-way controller introduces innovations such as video intercom capabilities, a haptic feedback touchscreen, and grip sensors while sustaining an incredibly sleek design and a lower price than its predecessor.

"The T3x remote control is a combination of ergonomic excellence and market-leading innovations," said Scott Kelley, vice president of sales and marketing for RTI. "With powerful features that are unavailable on any other handheld controller in its price range, the T3x is our most customizable, intuitive, and beautifully designed device to date. We are extremely proud to introduce this amazing product to our lineup of control and automation solutions."