Part of the give and take with electronics and economy is the sacrificing of features for a lower price. In the case of the Samsung BD-D5300 Blu-ray player, this give and take may be a bit of a struggle.

Samsung‘s 2011 Blu-ray line includes seven new models, of which the BD-D5300 is the least expensive at $149.99. We have not performed a hands-on review of the BD-D5300, but here is an overview of its features. This player omits the 3D playback and integrated WiFi that you can find in Samsung’s higher-priced models, but it still offers the newly redesigned Smart Hub platform, which includes video-on-demand services, access to the Samsung Apps store, AllShare/DLNA media streaming, and a Search All function that makes it easier to find content across all connected devices. Netflix, Blockbuster, Hulu Plus, YouTube, Pandora, Facebook, and Twitter are among the many available or included apps. The BD-D5300 supports the addition of an optional USB WiFi adapter (WIS09ABGN, $79.99), and it offers Samsung’s new One-Foot Connection: If you use the player in conjunction with Samsung’s CY-SWR1100 dual-N band wireless router, you can add the player to the wireless network by simply placing the products within one foot of each other during setup.

The BD-D5300’s connection panel includes HDMI, composite video, optical digital audio, and stereo analog audio. The BD-D5300 has onboard Dolby TrueHD decoding, but it lacks DTS-HD Master Audio decoding; it will pass both high-resolution audio formats in their native bitstream form over HDMI, for your A/V receiver to decode. Samsung has added a new feature called BD-Wise that allows the player to output a disc at its native resolution and frame rate when connected via HDMI to a compatible BD-Wise Samsung TV. This is desirable if you’d prefer to let the TV handle the upconversion and frame-rate conversion. The setup menu includes the ability to choose between three preset picture modes or go with a user mode in which you can adjust sharpness and noise reduction.

The BD-D5300 supports playback of BD, DVD, CD audio, AVCHD, Divx HD, MKV, MP4, WMA, MP3, and JPEG files. You can add the player to your home network either by using the back-panel Ethernet port or by adding the optional USB WiFI adapter to the back-panel USB port. The BD-D5300 lacks internal memory to store BD-Live content; a second, front-panel USB port is provided for this purpose. This USB port also supports music, photo, and movie playback. The player lacks advanced control ports, such as RS-232 or IR.

Read about the high points and low points of the Samsung BD-D5300 on Page 2. 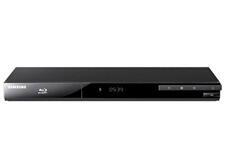 Low Points
• The BD-D5300 does not support 3D playback.
•
The player lacks DTS-HD MA decoding and multichannel analog audio
outputs, so it’s not the best choice for someone who owns an older A/V
receiver.
• It does not have integrated WiFi; the optional USB WiFi adapter costs $80.
• The player lacks internal memory to store BD-Live content.
• There’s no advanced control port like RS-232.

Competition and Comparison
Compare the Samsung BD-D5300 with its
competition by reading the reviews for the Sony BDP-S380,
Vizio VBR333,
and Sharp BD-HP24U.
Learn more about Blu-ray players by visiting our Blu-ray Players section.

Conclusion
As the most economical option in Samsung’s
2011 Blu-ray line, the BD-D5300 sacrifices some desirable features,
such as 3D support, integrated WiFi, and DTS-HD decoding. However, it’s
still a good choice for someone who wants Blu-ray playback and an
extensive Web platform with lots of customization options, thanks to the
Samsung Apps Store. If there’s any chance you might want a wireless
network connection at some point, I’d recommend stepping up to the
BD-D5700, which adds integrated WiFi for $50 (compared with the optional
WiFi USB adapter for $80). But, if you have no need for WiFi support
(perhaps you have Ethernet-over-powerline or another networking
technology), then the BD-D5300 makes more sense.