The Samsung BD-7500 Blu-ray player has been designed to provide user with all the latest features, which includes 3D, even going so far as to offer 2D to 3D conversion, as well as many other features.

The BD-D7500 is the new top-shelf player in Samsung’s 2011 Blu-ray lineup. We have not performed a hands-on review of the BD-D7500, but here is an overview of its features. This player supports 3D playback and 2D-to-3D conversion, and it offers Samsung’s new Smart Hub interface, which includes video-on-demand services, access to the Samsung Apps store, AllShare/DLNA media streaming, and a Search All function that makes it easier to find content across all connected devices. Netflix, Blockbuster, Hulu Plus, YouTube, Pandora, Facebook, and Twitter are among the many available or included apps. The BD-D7500 features built-in 802.11n for a wireless network connection, and it offers Samsung’s new One-Foot Connection: If you use the player in conjunction with Samsung’s CY-SWR1100 dual-N band wireless router, you can add the player to the wireless network by simply placing the products within one foot of each other during setup. The BD-D7500 has a more stylish form factor than the lower-priced models in Samsung’s line–with a wall-mountable design, a brushed-metal finish, a 0.9-inch height, and a 2.2-pound weight.

The BD-D7500’s connection panel offers a single HDMI output, an A/V mini-jack output (with a supplied breakout cable for composite video and stereo analog audio), and an optical digital audio output. It lacks the dual HDMI outputs offered on last year’s top-shelf BD-C6900, which is handy if you own an older A/V receiver that cannot pass 3D video. It also lacks multichannel analog audio outputs. The BD-D7500 has onboard Dolby TrueHD and DTS-HD Master Audio decoding, and it passes these high-resolution audio formats in their native bitstream form over HDMI, for your A/V receiver to decode. Samsung has added a new feature called BD-Wise that allows the player to output a disc at its native resolution and frame rate when connected via HDMI to a compatible BD-Wise Samsung TV. This is desirable if you’d prefer to let the TV handle the upconversion and frame-rate conversion. The setup menu includes the ability to choose between three preset picture modes or go with a user mode in which you can adjust sharpness and noise reduction. When you engage 2D-to-3D conversion, you can adjust the depth of the 3D image.

The BD-D7500 supports playback of BD, DVD, CD audio, AVCHD, Divx HD, MKV, MP4, WMA, MP3, and JPEG. You can add the player to your home network using either an Ethernet port or the internal 802.11n wireless module. The BD-D7500 has 1GB of internal memory to store BD-Live content, and a USB port is provided for additional storage. This USB port also supports music, photo, and movie playback. The player lacks advanced control ports, such as RS-232 or IR.

Read about the high point and low points of the BD-D7500 Blu-ray player on Page 2. 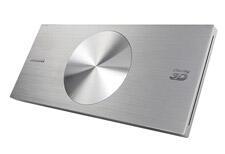 High Points
• The BD-D7500 supports 3D playback, when mated with other 3D-capable components.
• The player has internal decoding and bitstream output of high-resolution audio sources.
• It supports BD-Live and BonusView Blu-ray features.
• You can wirelessly connect the BD-D7500 to your network, and it has internal memory for BD-Live storage.
• The player includes Samsung’s Smart Hub, with extensive Web offerings, DLNA streaming, and an intuitive search function.
• BD-Wise allows you to output a disc at its native resolution and frame rate when connected to compatible Samsung TVs.
• The BD-D7500 has a stylish form factor.

Low Points
• The BD-D7500 lacks dual HDMI outputs to send separate signals to your 3D TV and A/V receiver.
•
It also lacks multichannel analog audio outputs, so it’s not the best
choice for someone who owns an older, non-HDMI A/V receiver.
• There’s no advanced control port like RS-232.

Competition and Comparison
Compare the Samsung BD-D7500 with its
competition by reading the reviews for the OPPO Digital BDP-93,
Pioneer Elite BDP-43FD,
and Sharp BD-HP80U.
Learn more about 3D Blu-ray players by visiting our Blu-ray Players
section.

Conclusion
The BD-D7500 ($349.99) is designed for
someone who wants all of the hottest Blu-ray features in a more
attractive case. Its lack of a second HDMI output, as well as
multichannel analog audio outputs, means it’s best mated with a new
3D-capable A/V receiver. If you don’t care about the player’s form
factor, then you might consider stepping down to the BD-D6700 ($299.99),
which shares all of the same features but has a more traditional design
(it also adds a second HDMI output). If you also aren’t terribly
interested in 2D-to-3D conversion (a feature that I’ve been less than
impressed with thus far), you can step down even further to the BD-D6500
and enjoy many of the same features (like 3D playback, Smart Hub, and
integrated WiFi) for $229.99.