Home Theater in a Box systems often seem like a one stop shop for a meaningful system. Often times they are serviceable, but there are systems out there that show why such ire is levied against the HTiBs. This is one of those systems. 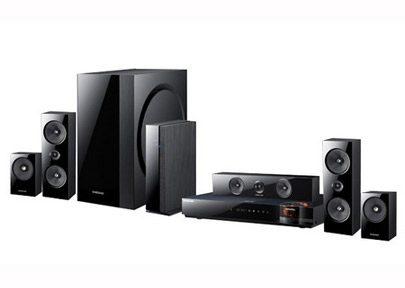 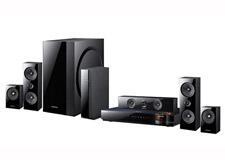 When one thinks of tubes, one generally doesn’t envision home theater components, so imagine my surprise when I stumbled across Samsung‘s latest home theater in a box (HTIB) featuring, you guessed it, tubes. Looking past the tube part of the HT-E6500W system, the rest seems rather pedestrian: five speakers and a subwoofer connected to a combination Blu-ray player/AV receiver. Minus a wireless receiver that powers the two rear speakers, the HT-E6500W is like any other HTIB available today – except it has tubes.

The HT-E6500W system retails for $739.99, which isn’t cheap, given what many HTIB systems go for nowadays. The HT-E6500W consists of two matching left and right channel speakers, each with a pair of bass/midrange drivers surrounding a single soft-dome tweeter. The center channel features the same driver configuration, albeit horizontal, though its driver complement is different from that of the left and right mains, which I thought was peculiar. Likewise, the rear channels rely solely on a single mid/bass driver each. One of the nice things about the rear speakers is that they are powered by a wireless receiver that connects to the main receiver via a wireless dongle, which is standard. The subwoofer is passive, featuring a side-firing woofer, and is powered by its connection to the main unit. No specifications for frequency response, crossover, impedance, etc. are provided in the HT-E6500W’s literature, which isn’t surprising, given that those shopping for HTIB systems generally aren’t diehard enthusiast types.

As for the main unit, it’s a sleek piece of kit featuring no hard controls, only touch-screen-like buttons across its facade. The two input tubes (they look like 6922 to me) reside in a glass cylinder that glows orange, not from the warm glow of the tubes themselves, but from the orange LEDs used to reinforce their glow. On the opposite end of the main unit rests its single Blu-ray disc tray, which is hidden behind a trap door. The whole piece is trimmed in high-gloss plastic, giving it a piano black sheen – minus the tubes, of course. Around back you’ll find three HDMI ports, two in and one out, a wireless dongle input (for the rear speakers), four custom ports for the front three speakers’ connectors, plus an additional port for the subwoofer. There is also a pair of analog audio inputs, as well as an optical input. An iPod dock and compatible cable are also included, which is a very nice touch, as Samsung could have easily made it optional in an attempt to score a few more bucks from an attached sale.

Under the hood, the main player/receiver dishes out 1,000 watts of total power, is 3D-capable and can play back all the latest surround sound codecs, including Dolby True HD and DTS-HD. It even has wired and wireless Internet capability, complete with Samsung’s own Smart Hub interface, as well as apps for popular online services such as Netflix and Pandora. For a more detailed breakdown of all of the HT-E6500W features, please visit its product page on the Samsung website.

In terms of performance, I was initially excited by the HT-E6500W’s setup controls. Much like modern AV receivers and preamps, HT-E6500W’s main unit features higher-level controls for distance, level and even auto-EQ. However, all of the controls are rough, working in whole numbers versus increments, so I was unable to set my speaker distances properly, instead having to choose between eleven and twelve feet, as there was no option for eleven-and-a-half feet. Same for volume. Using an SPL meter, I was unable to properly match all of the speakers’ levels in my room, due to only being able to adjust them by whole values. Even the auto-EQ feature was unable to get the mix right. Furthermore, I got the sense that there was already a base setup pre-programmed into the system’s hardware, as the subwoofer was always way too loud, even when throttled down a full 6dB. I did the best I could and moved on.

Anxious to hear what the tubes had in store for me, I began my evaluation with some two-channel music. I lasted 30 seconds before hitting pause. The sound was congested at best, and rife with sibilance in the tweeters and cabinet resonances throughout. In stereo, even at moderate to low volumes, I bottomed out the left and right mains’ meager bass/midrange drivers. I was anticipating the HT-E6500W would sound soft as a result of Samsung going overboard with the tube love, but instead the sound was akin to the early days of CD and iPods – atrocious. Turning the music back on but using Pro Logic II Music did smoothen things out a bit – which is to say it made the music tolerable, but hardly enjoyable.

Moving onto movies, things simply got worse. The center speaker, with its smaller drivers and low-profile construction, shrank dialogue and forced it to the bottom of my field of view. Furthermore, the same boxy resonances and high-frequency sibilance were present as well. There was no tonal uniformity across the front three speakers, nor any reasonable soundstage between or outside of their physical boundaries. It was as if each speaker wasn’t talking to the others and insisted upon doing its own thing. It was weird and, frankly, very jarring. Also, the sound didn’t seem to improve at all with higher-resolution formats, such as DTS-HD or Dolby TrueHD; it was all just a mess. The rear speakers had a sort of hollow tinniness to their sound that seemed a little out of step with the action onscreen.

As for the rest of the main unit’s functionality, I didn’t appreciate that it had its own picture settings, such as movie, standard or vivid, as none of these presets could be properly dialed in so as not to change the performance of my THX-calibrated Panasonic display. The Internet connectivity was weak sauce, despite having various preloaded applications and Samsung’s trick interface. Wired or wireless, the various programs and apps were sluggish and even non-responsive at times.

Read about the high points and low points of the Samsung HT-E6500W on Page 2.

High Points
• Upon first glance, the visual appearance of the HT-E6500W seems to be first-rate and the glowing “tube cage” is very alluring.
• The HT-E6500W affords you both a Blu-ray source and a minimal AV receiver all in one.
• I like the concept behind the HT-E6500W’s wireless rear speaker receiver.
• The Blu-ray player inside the HT-E6500W is very snappy in terms of load times and is quick to respond to menu commands.
• Returning the HT-E6500W to the store was more rewarding than listening to it or watching movies on it.

Low Points
• I’m calling BS on Samsung’s claims that the tubes residing inside the main unit of the HT-E6500W system do anything other than generate heat – a lot of heat. If they are affecting the sound at all, I do not hear it, for the overall sound quality of the HT-E6500W is decidedly un-tube-like.
• The speakers themselves have no grilles of any kind, meaning they’re easily damaged just taking them out of the box. I know, because I accidentally put my finger through one of the tweeters when removing it from its packaging. Because each speaker is individually wrapped in non-transparent foam padding, it is impossible to tell which side is which, thus the accidental damage that occurred.
• While the main unit has higher functionality for things like picture and audio quality, there appears to be a baseline setting that is not neutral or off, meaning that the HT-E6500W will “color” your picture and sound.
• As great an idea as the wireless rear receiver is, it doesn’t seem fast enough or powerful enough to keep up with the action on screen, resulting in a very disjointed surround sound experience.
• The subwoofer cannot be made to blend seamlessly with the rest of the speakers – hell, the rest of the speakers cannot be made to blend with each other.

Comparison and Competition
Admittedly we do not review a lot of HTIB systems, partially because that’s not our bag and partially because there seems to be a new one released every week. I’m not trying to knock HTIB systems, not at all, but it’s just not what we really do here at Home Theater Review. That said, given the money Samsung feels they can charge for this pile of bile, you can buy a decent home theater system consisting of five speakers and an AV receiver for about the same money. I promise you it will sound better. I would recommend Pioneer’s new SP Series of loudspeakers, which can be purchased in a 5.1 configuration for as little as $499.99. Add in the cost of a modest AV receiver, maybe one of Sony’s new $200 or $300 offerings, and you’re right around the cost of the HT-E6500W, and your system will sound so much better. If you’re willing to increase your budget to $1,000 total, whole new worlds will open up for you.

For more on these products and others, please visit Home Theater Review’s Soundbar page.

Conclusion
What can I say about the Samsung HT-E6500W Vacuum Tube Home Theater System at a little over $700 retail, other than “Skip it”? I mean it, don’t even waste your time or be fooled by its supposed “audiophile sound quality” – there isn’t any to be had. I found nothing redeeming about the Samsung HT-E6500W system and, if you’re looking to get into home theater, there are better, more affordable ways to do so.