Samsung offers a home theater solution more unique than many of their other offerings. The Samsung HW-D7000 is a combination AV receiver and Blu-ray player. Convenient? Yes. But does it perform? Adrienne Maxwell finds out. 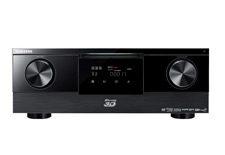 Essentially a home-theater-in-a-box minus the speakers, Samsung's new HW-D7000 combines an A/V receiver and a 3D-capable Blu-ray player in one box. Add in Samsung's Smart Hub--which includes video- and music-on-demand, AllShare/DLNA media streaming, and an apps store that lets you add a variety of services--and you've got yourself one full-fledged media center for $599.99. Heck, Samsung even throws in an iPod/iPhone dock for good measure.

Given its price point, the HW-D7000 has a healthy features list in both the receiver and Blu-ray camps. On the receiver side, this is a 7.2-channel model, with dual subwoofer outputs and 840 total watts of power (120 watts per channel). The connection panel includes four HDMI inputs and one HDMI output; two component video ins and one out; four composite video ins and one out; four digital audio ins (three optical, one coaxial) and five stereo analog ins; and speaker terminals that accept bare wire, spade lugs, or banana plugs. The HW-D7000 will convert all analog sources for 1080p output over HDMI, or you can configure it to bypass the upconversion and just perform analog-to-digital conversion. The back panel sports a LAN port for network connectivity, but the HW-D7000 also has built-in WiFi if you prefer to go the wireless route.

All of the important audio decoders are here, including Dolby TrueHD, DTS-HD Master Audio, and DPLIIx. Samsung offers an automatic setup tool called MRC (Musical Room Calibration) to help set speaker level, size, and distance using a supplied microphone. This tool does not perform the more advanced room equalization that you find in many higher-end receivers. You can also manually set the speakers, with crossover options from 60 to 200Hz. You can designate whether the surround back speakers are located behind the listening area or in the front, as the front height speakers in a DPLIIz setup; if you don't have surround back speakers, you can also use these channels to bi-amp your main speakers. The HW-D7000 does not offer second-zone audio capability. Additional audio tools include an MP3 Enhancer to improve the quality of compressed sources, Audio Return Channel to receive audio via HDMI 1.4 from your TV, and Smart Volume to minimize level variations.

On the Blu-ray side, the integrated player supports the Blu-ray 3D, Blu-ray, DVD, CD audio, MP3, WMA, Divx HD, and JPEG formats. 2D-to-3D conversion is available. The player has 1GB of onboard memory for storage of BD-Live content, and the front panel includes a USB port that allows you to add more storage (this port also supports media playback). The player includes Samsung's new BD-Wise feature; when connected to a compatible Samsung display, you can configure the player to output discs at their native resolution and let the display handle the resolution- and frame-rate conversion.

I liked the clean look of the HW-D7000's front face. Two large dials for volume and input selection flank a large display that offers information on source, sound mode, and speaker usage. The display also includes four touch-capacitance buttons for stop, play, select, and eject. Hit the eject button, and the entire display board moves down to reveal the slot for the disc player. Along the bottom of the front panel, you get numerous buttons for menu, navigation, audio tools, FM tuning, and more. All of these buttons are hidden behind a drop-down panel with a brushed-aluminum finish that adds a hint of elegance.

One of the dangers of housing multiple components in a single chassis is that, if the system is not intuitively designed, the device can be complicated to set up and use. That's not a problem with the HW-D7000, thanks to an excellent user interface that seamlessly blends receiver and media-player functions into one clean, colorful menu. You can navigate content either by device or type, the Settings section logically arranges your video and audio setup tools, and the Internet icon grants you access to Netflix, VUDU, Hulu Plus, Pandora, CinemaNow, Facebook, and more.

Unfortunately, the supplied remote control isn't quite as intuitive. To keep the remote's form factor small, some buttons share functions, requiring you to press a Shift key to change the functionality. The Blu-ray buttons are logically grouped together near the center of the remote, but the audio functions are scattered about. You do get direct buttons for Netflix and the Smart Hub, which is a plus. The controller lacks backlighting (the transport controls glow in the dark), as well as a dedicated QWERTY keyboard for easier text input. However, Android and iPhone users can download a controller app that includes a virtual keyboard.

In terms of Blu-ray performance, the HW-D7000 proves a worthy contender. Its speed is on par with most of the newer models in cuing up 3D and BD-Java-heavy discs, and it passed most of my processing tests. The player cleanly rendered the Coliseum flyover from chapter 12 of the Gladiator DVD without creating moiré or excessive jaggies, and it also produced minimal jaggies in my video-based demos. Detail in upconverted DVDs was solid, but I found the picture to be a little noisy in the default Standard picture mode. You can choose between several picture modes or customize your own, and I felt the Movie mode produced a cleaner image with DVD sources. The player passed all of the 1080i tests on the HD HQV Benchmark Blu-ray disc, and I encountered no issues with 3D playback.

I mated the HW-D7000 with my long-time RBH 5.1-channel setup, which includes large L/R towers and healthy-sized bookshelf models for the center and surrounds. That's probably more speaker than anyone would realistically mate with a receiver at this price point, yet the HW-D7000 did an admirable job driving such a heavy load. It didn't quite have the air or nuance of my Pioneer Elite receiver, but that product costs about three times as much as this Samsung model. A complete set of bookshelf speakers is probably a more logical match, and of course you have the option of bi-amping the mains to feed a bit more power up front.

High Points
• The HW-D7000 combines a receiver and Blu-ray player in one box.
• The system supports 3D playback and 2D-to-3D conversion.
• The unit features Samsung's Smart Hub, which includes many streaming VOD options and DLNA support. The HW-D7000 has built-in WiFi.
• It's a 7.2-channel receiver with dual subwoofer outputs and 120wpc. The HW-D7000 offers good performance for a budget receiver and includes an automatic setup tool.
• The onscreen user interface makes it easy to set up and use the HW-D7000.
• The package includes an iPod/iPhone docking cradle. The receiver automatically detects when you add the player to the dock, and you can navigate its contents via the main system remote.
• A remote app is available for Android and iPhone users, makes for easier text input.

Low Points
• The remote control lacks backlighting and is somewhat cluttered in its layout.
• The HW-D7000 doesn't support a second audio zone.
• The automatic setup tool doesn't include advanced room correction.
• The receiver offers basic volume leveling but does not employ a more advanced option from Dolby or Audyssey.

Conclusion
If you're looking for a true home entertainment hub, the HW-D7000 fits the bill nicely. It combines the most desirable sources--Blu-ray, video-on-demand, iPod/iPhone playback, DLNA/AllShare streaming, and plenty of inputs to accommodate other devices--into one well-conceived platform that even the novice HT fan can set up and navigate. The HW-D7000 makes sense for someone who likes the convenience of an all-in-one system but desires the flexibility to choose better speakers than you often get with a prepackaged HT system.