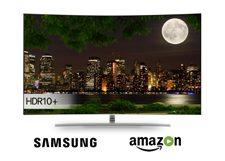 4K Ultra HD, News
Published On: April 20, 2017
We May Earn From Some Purchases Via Affiliate Links

Samsung has announced the introduction of the HDR10+ open standard for High Dynamic Range content. One of the criticisms of HDR10 is that it only allows for static metadata throughout the film or TV show. HDR10+ functions more like Dolby... 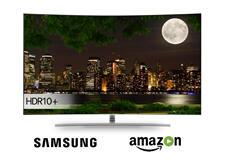 Samsung has announced the introduction of the HDR10+ open standard for High Dynamic Range content. One of the criticisms of HDR10 is that it only allows for static metadata throughout the film or TV show. HDR10+ functions more like Dolby Vision, allowing for dynamic metadata so that the HDR-capable TV can adjust itself on a scene-by-scene or frame-by-frame basis to more accurately reproduce HDR content. All of Samsung's 2017 HDR-capable TVs will support HDR10+, and a firmware update will add the function to 2016 models later this year. Amazon will be the first provider to offer content in the HDR10+ format.

From Samsung
Samsung Electronics Co., Ltd. and Amazon Video have announced the introduction of HDR10+, an updated open standard that leverages dynamic metadata to produce enhanced contrast and colors on an expanded range of televisions.

HDR10+ elevates the HDR10 open standard with the addition of Dynamic Tone Mapping. The current HDR10 standard utilizes static metadata that does not change during playback despite scene specific brightness levels. As a result, image quality may not be optimal in some scenes. For example, when a movie's overall color scheme is very bright but has a few scenes filmed in relatively dim lighting, those scenes will appear significantly darker than what was originally envisioned by the director.

HDR10+ incorporates dynamic metadata that allows a high dynamic range (HDR) TV to adjust brightness levels on a scene-by-scene or even frame-by-frame basis. With the ability to display outstanding contrast with detailed highlights and a richer range of colors, HDR10+ produces images that are much closer to the director's intent.

All of Samsung's 2017 UHD TVs, including its premium QLED TV lineup, support HDR10+. In the second half of this year, Samsung's 2016 UHD TVs will gain HDR10+ support through a firmware update.

"Together with Samsung, we are excited to offer customers an enhanced viewing experience on a broad range of devices," said Greg Hart, Vice President of Amazon Video, worldwide. "At Amazon, we are constantly innovating on behalf of customers and are thrilled to be the first streaming service provider to work with Samsung to make HDR10+ available on Prime Video globally later this year."

The launch of the HDR10+ content continues Samsung's and Amazon Video's leadership in the HDR space. With the move to HDR 10+, Amazon Video is the first streaming service provider to begin development of the standard for its audiences. In May 2015, Samsung and Amazon Video brought HDR to the market using the HDR10 open standard, the first in the field. This bold and innovative advancement laid the groundwork for several HDR launches. From Hollywood film studios to global TV manufacturers, HDR10 is the most broadly used HDR standard today.

Samsung has also partnered with other industry leaders to deliver the best HDR10+ content viewing experience by establishing an HDR10+ ecosystem. Previously, Samsung collaborated with Colorfront to improve HDR10+ workflows for creative post-production mastering by using Colorfront's Transkoder. Samsung also partnered with MulticoreWare to complete the integration of HDR10+ support in the x265 High Efficiency Video Coding (HEVC), which is available for free under an open source license, and is used by many popular commercial encoding system providers including Telestream, Haivision, and Rohde and Schwarz.