In August, Samsung will introduce its SERIF 40-inch LED/LCD TV to the U.S. market. This TV places a strong emphasis on aesthetics and was designed in partnership with Parisian design duo Ronan and Erwan Bouroullec. In addition to its unique visual... 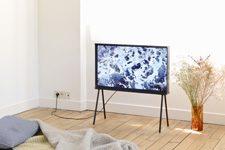 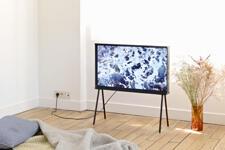 In August, Samsung will introduce its SERIF 40-inch LED/LCD TV to the U.S. market. This TV places a strong emphasis on aesthetics and was designed in partnership with Parisian design duo Ronan and Erwan Bouroullec. In addition to its unique visual appearance, the SERIF TV also has a redesigned user interface and simplified remote control. The SERIF is an HDR-capable UHD TV, and it will sell through certain specialty retailers (described below) for $1,499.

From Samsung
Samsung Electronics America, Inc. has announced that the Samsung SERIF TV is coming to the U.S. this summer. A true collaboration with acclaimed Parisian design duo Ronan and Erwan Bouroullec, the Samsung SERIF TV redefines the television experience. It will be available starting in August at high-end design-centric retailers including Vitra, Bo Concept NY and Ligne Roset stores in major markets. Today, it is available for presale through Samsung.com and the MoMA Design Store.

The partnership marks the first time that Samsung has aligned with a designer to not only re-envision how the TV looks but also how it functions. From top to bottom, inside and out, the Bouroullec Brothers re-imagined every aspect, from its minimal yet solid exterior form to its refined user interface and even its simplified remote control. The Samsung SERIF TV is just as beautiful to watch as it is to experience, with the best picture quality available in a 40″ TV.

“Stunning picture quality and crisp sound clarity are what consumers expect from Samsung. However, our research also tells us that there is a subset of consumers, largely underserved by the TV industry thus far, who care just as deeply about design and how their TV complements the aesthetics of their home environment,” said Dave Das, Senior Vice President, Home Entertainment, Samsung Electronics America. “The Bouroullec Brothers share and embrace our vision of merging design and technology, and we are pleased to introduce the SERIF TV to the U.S. market via a strategic group of retail partners in the design and furnishings world.”

Drawing inspiration from the simple elegance of typography, the Samsung SERIF TV forms a distinct capital “I” shape in profile, its slim body broadening to form a flat surface like a shelf at the top. This form enables it to be displayed seamlessly in the home, either on top of a credenza or via attachable legs that transform the Samsung SERIF TV into a piece of furniture. By design, the Samsung SERIF TV blends harmoniously with its surroundings, whether in a den or in a bedroom, an urban oasis or a suburban retreat.

Together with Samsung, the Bouroullec Brothers approached the design of the SERIF TV user interface not only from a practical perspective by developing a bespoke Smart TV menu that is simple and accessible but also delivered a unique and interactive visual display experience unlike any other. They created an exclusive Curtain Mode interface that veils content on the screen to give an abstract impression of what is happening in the background, shutting down content without turning off the TV itself. Even when Curtain Mode is active, viewers can still access services such as a clock, Bluetooth speakers, apps and their photo gallery.

“From the onset of designing the Samsung SERIF TV, we aimed to craft a modest and accessible object that fused our furniture design expertise with technology,” said Ronan and Erwan Bouroullec. “We are thrilled to collaborate with Samsung and bring the SERIF TV to U.S. consumers.”

The Samsung SERIF TV includes all of the features that consumers desire from a Samsung television: a 4K UHD resolution which provides four times the resolution of full HD TVs and HDR Premium technology to enhance the picture’s color and brightness while creating a more natural, realistic image. As a Smart TV, it also includes a quad-core processor for a fluid browsing experience and seamless switching between live TV, apps and streaming content.

The 40″ Samsung SERIF TV (UN40LS001AFXZA/UN40LS001CFXZA) will be available starting in August 2016 for an MSRP of $1,499. It is offered in white across all retail partners and in blue, exclusively through the MOMA Design Store and on Samsung.com.