Samsung has stepped up its game in the audio realm, adding new table top audio systems, home theater systems, and soundbars. Adrienne Maxwell was in attendance at the Samsung event where the new products were announced.

If I asked you to start naming audio companies off the top of your head, it’s unlikely that Samsung would be among the top ten. I venture a guess that the company probably wouldn’t break the top 20. As Senior VP for Home Entertainment Joe Stinziano told TWICE magazine “Consumers think of us as being a leader in TVs, smartphones, and appliances, but they don’t recognize us as an audio company.” At a recent event in New York City, Samsung made it clear that the company would like to change that perception with the introduction of a new higher-end line of tube-based audio systems.

Many of Samsung’s 2012 audio products were on display at the event, including new convertible soundbars (you can split the bar in two) and a total of six tabletop audio systems (four traditional box products and two rounded, horn-type designs). However, the night’s focus was primarily on three products due for a spring release: the gorgeous DA-E750 tabletop audio system and the HT-E6730W and HT-E6500W multichannel HT systems, all of which utilize vacuum-tube preamps and digital amplifiers. Samsung contends that this combination gives you the best of the analog and digital worlds–the warmer, more natural sound of a vacuum tube and the higher efficiency, smaller profile, and lower distortion of a digital amplifier. (The tubes are 12AU7s from JJ Electronics.) Samsung has also upgraded the speaker design in these three products, using new glass fiber cones and adding phase plugs to the midrange drivers.

For me, the standout product was the DA-E750. At $799, this tabletop system is clearly targeted at the audiophile-oriented shopper; its MSRP pits it against the likes of the B&W Zeppelin Air, the Geneva Model M, and the NAD Viso 1. The 2.1-channel system includes a down-firing subwoofer and 100 watts of amplification (20W x 2, plus 60 Watts for the sub). Samsung has covered the bases in the connectivity department to make for a very flexible docking unit: The DA-E750 has integrated AirPlay, as well as Bluetooth 3.0 with aptX and AllShare/DLNA support. Its hidden docking system can accommodate iOS and Galaxy (for charging only) products, and a USB port and auxiliary input are also included. The new Sound Share function will allow you to wirelessly transmit audio over Bluetooth from certain Samsung TVs (including apps) directly to the tabletop system. The DA-E750 has an elegant beauty that earned a lot of praise; the well-constructed, high-gloss cabinet is offered in your choice of piano black or mahogany, and of course the glow of the vacuum tubes is visible through a clear top-panel window.

Journalists were invited to hear a few short demos of the DA-E750, and I was impressed with its performance. With mellower tracks from James Taylor and Justin Townes Earle (who later performed a fun, engaging set for those in attendance), the tabletop system produced a warm, open, yet clean sound with respectable bass. It also didn’t flinch when we convinced the Samsung rep to show off its meatier, more dynamic side with a bit of Girl Talk’s “Oh No” from colleague Dennis Burger’s personal iPhone collection. I would’ve loved to hear more, and that’s a good sign. 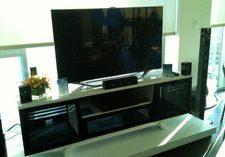 The company also did some A/B comparisons between the new 7.1-channel HT-E6730W ($999) and last year’s comparably priced system, which obviously doesn’t employ the new tube technology and speaker upgrades. The HT-E6730W features tallboy front speakers that incorporate a new tiltable height channel. The combination of all these tweaks produced a noticeably different sound than the older Samsung system. The stage was larger and more open, the vocals a bit warmer and more laid back. Both the HT-E6730W and the 5.1-channel HT-E6500W ($799) include wireless surrounds and Samsung’s Smart Hub with built-in WiFi. You can get the full rundown here.

During the event presentation, Samsung mentioned that, in 2011, it held a 34 percent market share in disc-based HTIBs and was number one in soundbars. The company is clearly doing well in the more budget-oriented audio categories that tend to draw the attention of the average HDTV shopper, so why the new “premium” push? Why such a high-profile launch of tube-based products? Jim Kiczek, the Director of Marketing for Home Theater and Blu-ray, explained simply that Samsung is ready for a new challenge. “We’ve mastered our core segment, and now we have a strong desire to enter the premium audio space.” The company plans to launch a major audio marketing campaign, beginning with the tabletop products and moving to the HT systems later in the year. Will Samsung succeed in this new endeavor? That remains to be seen, but I find it interesting that one of the industry’s top video companies plans to campaign on behalf of higher-quality audio. While HDTV sales have boomed over the past few years, the average consumer hasn’t devoted much thought or money to the audio side of the home theater equation. So, if Samsung feels inclined to get the word out that audio quality is important too, well that’s a message we can all get behind.