Samsung has designed some rather impressive audio docks that will work with Apple iOS devices, as well as the company's Galaxy S devices. And with the unveiling, it become clear that the docks were attractively designed as well. 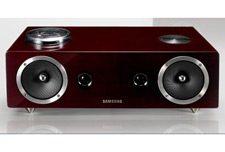 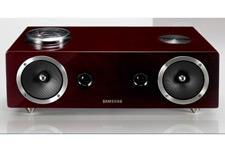 Previously only available in premium audio products, vacuum tubes amplifiers have been praised by audiophiles for producing more natural sounds, but these sounds were occasionally subject to distortion. Digital amplifiers deliver clear sound output, are more energy efficient and can fit into a smaller form factor. By combining the best of both, Samsung claims they have achieved a technology breakthrough, thereby raising the bar in sound quality for mainstream audio products. The vacuum tube is used as in the pre-amplifier while the power amplifier uses digital technology so the audio dock is able to maintain its slim body.

The DA-E750 is reportedly the industry’s first device with docking support for both Galaxy S smartphones as well as Apple iOS devices including iPods, iPhones, and even iPads via unique dual docking structure. The audio dock, which boasts a 2.1-channel speaker and built-in subwoofer with 100 watts of sound, also offers analog (composite) input and a USB port to play audio files directly from a thumb drive, music player or portable hard drive. MP3, WMA and WAV file formats are supported.

In addition, the DA-E750 supports wireless audio file playback through AllShare for Samsung Galaxy devices and Airplay for Apple devices, or via Bluetooth enabled devices for flexibility and convenience.

The Samsung DA-E670 Audio Dock for Galaxy S Smartphones, as well as Apple iOS devices, is an audio dock that offers a listening experience while simultaneously charging the batteries of each device. With its compact footprint, the DA-E670 would be right at home in a living room, in a home office, or even in a bedroom, wherever music can be enjoyed while the devices charge.

The audio dock delivers sound through built-in speakers that collectively output 40 watts of power and an integrated subwoofer that allows users to experience an enhanced bass response than what is available on conventional docking stations.

The assortment of features that accompany the DA-E670 include an auxiliary input and support for Bluetooth-enabled devices, audio support for MP3, WMA, WAV files from portable storage devices connected via USB. The DA-E670 also offers users a simple remote control. Like the DA-E750, the DA-E670 supports both AllShare for Samsung devices and Airplay for Apple devices.