Samsung Resizes The Wall to Fit Your Wall

Samsung Resizes The Wall to Fit Your Wall

By showing off its MicroLED technology in a 75-inch configuration, Samsung is signaling that a move to the home market can't be too terribly far away. 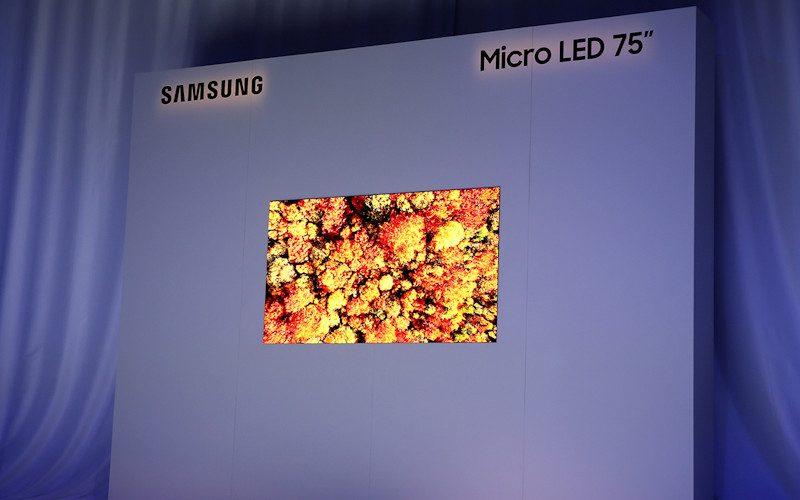 The biggest news we’ve seen come out of CES so far isn’t exactly the biggest thing. In fact, it’s a relatively small thing, but it’ll no doubt have a massive impact on the future of home display technology.

We’ve told you in the past about MicroLED video walls–gargantuan, modular displays, each pixel of which is comprised of individual LEDs. At this year’s CEDIA, we saw MicroLED walls that would literally dwarf many a commercial cinema, much less home cinemas.

That’s what makes Samsung’s new 75-inch MicroLED such a big (um, little?) deal. If Samsung is showing off the technology at sizes this small, it’s a pretty safe bet that they’re getting ready to bring MicroLED into the home, in addition to its existing commercial-facing applications.

Of course, the company also showed off The Wall in 219-inch form, just to remind attendees that MicroLED isn’t constrained by conventional notions of screen size. But it’s the little guy that really grabs our attention, and no doubt we’ll be talking about MicroLED a lot more in the coming months.

“For decades, Samsung has led the way in next-generation display innovation,” said Jonghee Han, President of Visual Display Business at Samsung Electronics. “Our Micro LED technology is at the forefront of the next screen revolution with intelligent, customizable displays that excel in every performance category. Samsung Micro LED has no boundaries, only endless possibilities.”

At last year’s CES, Samsung introduced Micro LED by unveiling The Wall, the critically acclaimed, award-winning 146″ Micro LED display. Due to the technical advancements in the ultra-fine pitch semiconductor packaging process that narrow the gap between the microscopic LED chips, Samsung has been able to create a stunning 4K Micro LED display in a smaller, more home-friendly 75″ form factor.

Thanks to the modular nature of Micro LED, this technology offers flexibility in screen size that allows users to customize it to fit any room or space. By adding Micro LED modules, users can expand their display to any size they desire. The modular functionality of Micro LED will allow users in the future to create the ultimate display even at irregular 9:3, 1:7 or 5:1 screen sizes that suits their spatial, aesthetic and functional needs.

Samsung’s Micro LED technology also optimizes the content no matter the size and shape of the screen. Even when adding more modules, Samsung Micro LED displays can scale to increase the resolution — all while keeping the pixel density constant. Additionally, Micro LED can support everything from the standard 16:9 content, to 21:9 widescreen films, to unconventional aspect ratios like 32:9, or even 1:1 – without having to make any compromises in its picture quality.

Finally, because Micro LED displays are bezel-free, there are no borders between modules – even when you add more. The result is a seamless, stunning infinity pool effect that allows the display to elegantly blend into any living environment. The possibilities for eye-catching designs are enhanced by new Ambient Mode features.