At CES, Samsung showed off its new flagship SUHD TV offering, the KS9500, which will be available in screen sizes of 65, 77, and 88 inches. With this year's SUHD models, Samsung promises improved brightness over last year's SUHD TVs... 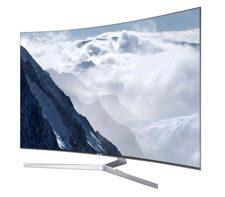 At CES, Samsung showed off its new flagship SUHD TV offering, the KS9500, which will be available in screen sizes of 65, 77, and 88 inches. With this year's SUHD models, Samsung promises improved brightness over last year's SUHD TVs (at least 1,000 nits) and new Ultra Black technology to significantly reduce light reflection, as well as a more attractive form factor, an improved Smart TV system, and the addition of SmartThings IoT technology. Details on the complete TV lineup will likely come at the company's spring line show.

The company also announced its first Ultra HD Blu-ray player, the UBD-K8500, which is already available for pre-order.

From Samsung
Samsung Electronics Co., Ltd. has unveiled its spectacular new line-up of SUHD TVs at CES 2016, ushering in a new decade of global TV leadership.

Samsung's 2016 SUHD TVs offer unparalleled picture quality with Quantum dot display, the world's first bezel-less curved design, which is beautiful from every angle and the smartest user experience that makes it easy for consumers to access all their entertainment content in one place. In addition, the full 2016 SUHD TV lineup is applied IoT hub technology, allowing the TV itself to act as the controller for the entire smart home.

"Our new SUHD TVs represent our singular focus on innovation that matters most to consumers, by providing the very best picture quality for the home," said Hyun Suk Kim, President of Visual Display Business at Samsung Electronics. "In 2016, we're going beyond anything we've done before to offer a remarkable synergy of design, engineering and craftsmanship."

With no bezel that normally functions as the border, the viewer's attention is focused purely on what matters most - captivating content on the screen. In keeping with this design ethos, Samsung has sought to eliminate all unnecessary elements, even removing screws from the rear of the TV, to create an elegant product that is beautiful from every angle.

Unlimited, Seamless Entertainment through Single Access and Single Remote
Built on the Tizen operating system (OS), Samsung's 2016 Smart TVs make it easier for consumers to discover and access all their favorite content and services, from TV and movies to games and program information, all in one place.

• New Smart Hub - The 2016 Smart Hub is designed to provide users with simple access to their favorite content all in one place. Live TV, over the top (OTT), games and even the menu that appears on the home screen of the Samsung Smart TV allows users to access their favorite programs as soon as they turn on the TV.

• Console-less Gaming - Consumers can enjoy the most realistic gaming experience on a large screen without the need for a console. More than 500 streaming and downloadable games will be available on the 2016 Samsung Smart TVs. Recent additions for PlayStationTMNow include Assassin's Creed III, Batman: Arkham Origins, The LEGO Movie and many more.

• EXTRA Service - With a push of the EXTRA hot button on the Samsung Smart Control remote, information related to the content will appear onscreen instantly. Users can see player profiles and stats during sporting events, information on cast members for their favorite TV shows and more.

• Smart View - The Samsung Smart View mobile app allows users to share their favorite content instantly with their family. The upgraded Smart View is now available beyond Samsung Galaxy devices, supporting Android and iOS devices, as well as Window PCs. Popular apps and websites including AccuWeather, Crackle, iHeartRadio, M-GO, Plex, Pluto.TV, UFC, Vimeo, YuppTV and more are all also Smart View enabled, so consumers can begin the entertainment experience right within the apps and services they enjoy most.

• More access to content - Streaming UHD movies and TV shows from providers such as Amazon, M-GO, and Netflix and accessing apps such as YouTube has gotten even easier. UHD technologies developed by NeuLion will also enable a selection of sporting events to stream 4K live. Consumers can also connect Samsung's new Ultra HD Blu-ray Player via HDMI (2.0a) for access to UHD movies with HDR. Direct access to live programming from providers such as Dish and Time Warner Cable is simplified.

TV becomes the Controller for the Connected Home
All 2016 SUHD TVs feature IoT hub technology, developed by Samsung with SmartThings. The SUHD TV can connect with and control over 200 SmartThings compatible devices - whether it's to see who is ringing the doorbell, lock the doors or turn off the lights - all from the TV.

The new feature also enhances the entertainment experience by allowing consumers the ability to program a routine that puts the TV in the appropriate picture settings for a movie and activate the soundbar and surround system while watching TV - taking "smart" TV to a new level. For the full support of connectivity with SmartThings compatible devices, a SmartThings Extend USB adapter is required.

Samsung has partnered with Hollywood studios to ensure consumers have a selection of Ultra HD Blu-rays with astonishing HDR picture quality. This year, Twentieth Century Fox is slated to release more than 30 4K Ultra HD discs with HDR including films like The Martian, Peanuts, and among others.