At CES 2017, Samsung debuted its new premium TV line, the QLED Series (the SUHD moniker is no more). The "Q" stands for quantum dots, a technology that Samsung has used for the past couple of years to produce a... 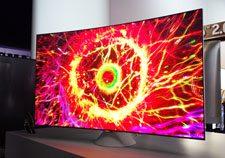 At CES 2017, Samsung debuted its new premium TV line, the QLED Series (the SUHD moniker is no more). The “Q” stands for quantum dots, a technology that Samsung has used for the past couple of years to produce a wider color gamut in its premium LED/LCD TVs. This year, the company has added a new metal material to its nano-sized quantum dots, designed to improve color accuracy and luminance efficiency–especially at wider viewing angles. (This is not Samsung’s new quantum dot TV technology that we discussed in our recent story The Year in Review … and a Look Ahead.) The QLED line will feature three series–the Q9, Q8, and Q7–which have a stated brightness between 1,500 and 2,000 nits and will reportedly use edge LED lighting. More specific details will come at Samsung’s spring line show.

From Samsung
Samsung Electronics has announced its new QLED TV series–Q9, Q8, and Q7. “2017 will mark a major paradigm shift in the visual display industry, ushering in the era of QLED,” said HyunSuk Kim, President of the Visual Display Business at Samsung Electronics. “With the advent of QLED TV, we provide the most true-to-life picture on screen. We have been successful in solving for past inconsistencies in the viewing experience and consumer pain points while redefining the fundamental value of TV.”

Samsung’s Best Picture Quality – Ever
?With picture quality remaining a top priority for consumers around the world, especially as the average TV continues to increase in size, Samsung’s 2017 QLED TVs represent yet another leap forward. The new lineup offers dramatically improved color performance, displaying DCI-P3 color space accurately. In another world first for Samsung, QLED TVs are capable of showcasing 100 percent color volume. This means they can express all colors at any level of brightness–with even the subtlest differences visible at the QLED’s peak luminance, between 1,500 and 2,000 nits.

Color volume presents color that can be expressed at different levels of brightness. For example, a leaf can be perceived as different colors from yellowish green to turquoise, depending on brightness of the light. Samsung QLED TV display can capture even subtle ?differences in color pertaining to brightness. This kind of color detail cannot be easily depicted in the traditional 2D color space models.

This breakthrough is a result of Samsung adding a new metal material to its nano-sized semiconductor quantum dots, which dramatically improves color accuracy and luminance efficiency. The new metal quantum dot material enables the QLED TV to express deep blacks and rich detail regardless of how light or dark the scene is, or whether the content is being played in a brightly lit or darkened room. Furthermore, Samsung’s QLED TV can generate peak luminance as high as 1,500 to 2,000 nits of brightness, with no impact on its ability to deliver accurate and impeccable color. With the new Quantum Dot technology, brightness no longer has to be compromised to boost color performance, which is also maintained regardless of how wide the viewing angle may be.

?”With the QLED TV, we’ve solved problems that everyone–and every home–has experienced; cable clutter, thick wall mounts and a slew of devices sitting right under the TV,” said Dave Das, Senior Vice President of Consumer Electronics Marketing for Samsung Electronics America. “With our 2017 lineup, the focus remains where it should be–the content on the screen –not everything surrounding it.”

The improvements to design and usability in the QLED TV series include a single, transparent ‘Invisible Connection’ cable, through which all of the peripheral devices can be gathered and connected to the TV. This is in addition to the ‘No-gap wall-mount’, which makes it quick and easy to affix the TV flush against the wall. Or, for those who prefer not to mount the TV, Samsung is offering two new stands designed to elevate and showcase the QLED TVs as beautiful home accessories all by themselves. Consumers can choose either the ‘Studio Stand’, which resembles an easel with a painting, or the sleek ‘Gravity Stand’, which when attached to the TV resembles a contemporary sculpture.

Samsung’s Smartest TV Ever
In 2017, Samsung is focused on the continued evolution of its much lauded Smart TV offering, giving people the simple, unified user experience they want for all their entertainment content–wherever and whenever they want it. For example, with the Samsung Smart Remote, consumers can control most connected TV devices from a single source, with one device.

This year, the ‘Smart Hub’ interface has been extended to smartphones through Samsung’s new and improved ‘Smart View’ app, which now provides a comprehensive overview of all available content on the app’s home screen. Thus, consumers can use their mobile device to select and start their favorite live TV programs and video-on-demand services–on their TV, through the ‘Smart View’ mobile app. Consumers can also choose to receive alerts on their mobile devices about their favorite content, regarding for example, show times and availability.

Samsung also introduced two new Smart TV services, including ‘Sports’, which shows a customizable summary of a customer’s favorite sports team and its recent and upcoming games, and ‘Music’, which can identify songs as they are being played live on a TV show, among many other features.