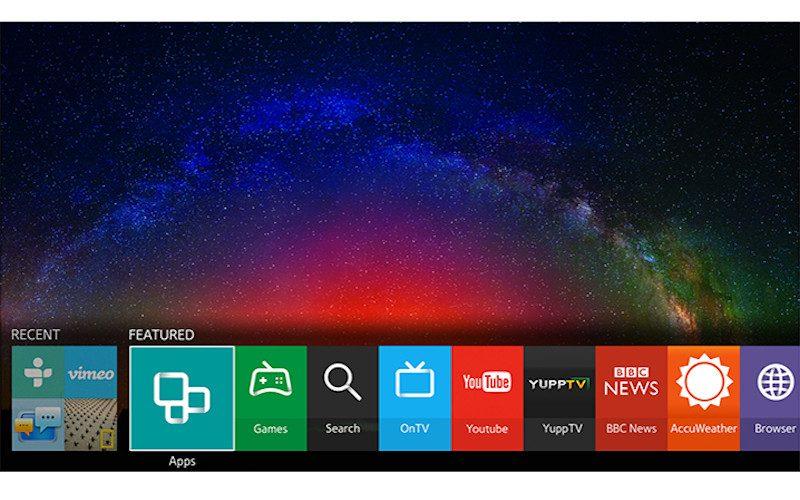 Equipment Reviews, Streaming Media Player/App Reviews
Published On: September 23, 2015
We May Earn From Some Purchases Via Affiliate Links

Samsung’s 2015 line of smart TVs features a brand new Smart Hub Web platform that’s built around the open-source Tizen operating system, which Samsung is also incorporating into products like phones, watches, and cameras. Samsung has overhauled the Smart Hub user interface to create a simpler, more streamlined approach to accessing streamed media. This review is based on Smart Hub as it appears in the new UN65JS8500 SUHD TV that I recently reviewed–a TV that includes voice and motion control integrated into the small, minimalist remote control.

To launch Smart Hub, press the remote’s Smart Hub button to bring up a simple banner that runs across the bottom of the screen as your current source continues to play full-screen. The banner features colorful icons that show your most recently used apps; just click on an icon to launch the app. In general, I found that the major apps launched within about 10 seconds, although occasionally it would take longer for no apparent reason. After you launch an app, it remains running in the background and therefore opens much faster when you revisit it during the same viewing session. You can add or subtract apps from the banner as you see fit. Highlight a certain app icon and press the up arrow to get quick tools to delete the icon, to move it to the front of the row, or to launch MultiLink–which is Samsung’s dual-view system that allows you to watch your current source on the left while navigating the desired app on the right. 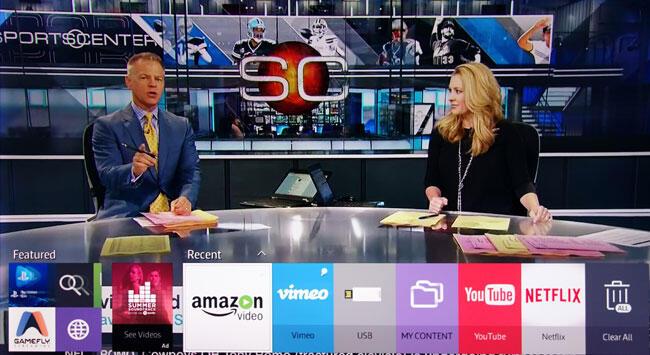 Over to the left of the banner is an icon labeled “Featured”; click on this to switch from seeing recently used apps to seeing featured or popular apps. When the Featured apps are on display, you will see a rotating assortment of popular apps like Netflix, YouTube, M-Go, etc. You’ll also see icons for “Apps” and “Games” that take you directly to Samsung’s full-screen marketplace to browse and add new services.

Samsung’s Games market has lots of titles from which to choose, some of which can be controlled via the Samsung remote and some of which require a Bluetooth gamepad controller. The 2015 smart TVs include access to the PlayStation Now and GameFly streaming sites.

The Apps market is extensive and includes almost every big name you can think of on the video side, including 4K-friendly versions of Netflix, YouTube, Amazon, and M-GO–if you have a UHD TV, that is. Pair your UHD TV with the newest version of Samsung’s UHD Video Pack USB drive ($50), and you can download 4K content from M-Go’s VIDITY 4K Ultra HD lineup, which actually includes some compelling and relatively current films like Exodus, Wild, The Maze Runner, and X-Men Days of Future Past. The UltraFlix app is reportedly coming soon. I do find it interesting that the new Apps menu doesn’t include a dedicated section for music apps; instead, you must browse the Lifestyle menu to find apps like iHeartRadio, SiriusXM, Rdio, Pandora, TuneIn, and Amazon Cloud Player. Spotify, Rhapsody, and Tidal are missing. 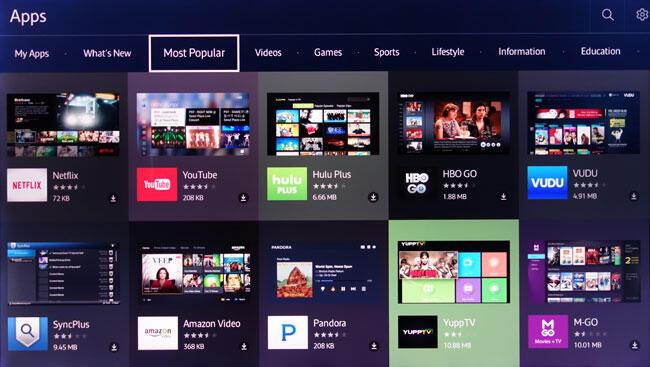 One thing I don’t like about the individual category pages is that the most popular apps in each category aren’t necessarily listed first, forcing you to browse through a lot of smaller, more obscure apps to find the big ones you probably want (there is a separate “Most Popular” category (see above), but it has a limited list of apps. If you know exactly which app you’re looking for, you’re better off using the Search tool to key in the name.

Speaking of search tools, Samsung’s overall Search function isn’t as comprehensive this year. The Search icon pulls up an onscreen keyboard with predictive text that works quite well, and there’s also a microphone icon that you can click on to activate voice data entry. That’s easy enough, but the search results I got when inputting a movie or TV show only included YouTube and Vevo video clips, not actual listings of which streaming services offered that content–something that was available in previous Smart Hub iterations.

The Smart Hub system still includes the ability to control your cable/satellite set-top box using the TV remote, with integrated onscreen controls and programming information based on your provider. The remote’s Extra button brings up an info column to the right of the screen that provides a description of the show you’re watching, actor info, tweets related to that show, and recommended shows that are currently playing on other channels. This isn’t nearly as comprehensive as the full-page “On TV” interface that was available as part of last year’s Smart Hub, which offered tailored recommendations based on your viewing habits, among other things.

Smart Hub 2015 still includes a Web browser that supports Flash, and the motion-controlled Pointer tool on the higher-end remote made it pretty easy to input text via the onscreen keyboard and navigate pages.

The My Content app allows you to view personal media files via USB or DLNA-compatible media servers. When I launched My Content, my Seagate DLNA server immediately appeared on the list, and I had no issues playing back stored music, photo, and video files. I also loaded files on a USB drive, and that worked just as well. File compatibility is very good. Smart Hub supports playback of MP3, WMA, M4A, AAC, FLAC, OGG, WAV, and AIFF for music; AVI, MKV, MP4, MOV, and VOB for video; and JPEG, PNG, BMP, and MPO for photos. I had no trouble playing 24/96 FLAC and AIFF files from HDTracks; many of Samsung’s new TV’s include a variety of ways to connect to external speaker systems, which is where this hi-res file support would be meaningful. When reading files off a USB drive, you can filter the contents by music, photo, or video if you haven’t already separated them as such, and the menu does not show incompatible files that might be stored on the drive–so you don’t run into the issue of trying to play something and getting a “file not supported” message. Also, the Apps market includes popular media-sharing apps like PLEX.

One promise of the new Smart Hub is easier connection to mobile devices. You can still “swipe” media content from a smartphone or tablet that’s on the same Wi-Fi network as the TV, using the Samsung Smart View 2.0 app for iOS/Android. This consistently worked for me, although playback was somewhat slow to transfer from phone to TV. If your mobile device supports Wi-Fi Direct or Screen Mirroring, you can link the device and TV that way. The new addition is the use of Bluetooth Low Energy (BLE), which allows the TV to automatically search for nearby Samsung mobile devices and connect to them for a more immediate sharing experience. Unfortunately I did not have a compatible device on hand to test this process.

High Points
• Smart Hub 2015 has a cleaner, more streamlined user interface that allows you to get to your apps faster.
• Smart Hub includes a large selection of movie, music, game and other apps, and Samsung has more 4K apps, due to deals with M-Go, DirecTV, and Comcast.
• You can stream media from a variety of networkable and USB devices, and the platform supports a lot of file formats. In my experience, playback from these devices was smooth and glitch-free.
• The Smart View 2.0 control app works well for TV control and “swiping” media files from your mobile device to the TV. Smart Hub also supports connection to mobile devices via Wi-Fi Direct, Screen Mirroring, and newly added Bluetooth Low Energy.

Low Points
• On occasion, the Apps market would fail to load properly, giving me an all-white screen.
• This year’s Smart Hub lacks most of the advanced search and content recommendation tools that were available last year.
• The Smart View 2.0 virtual keyboard still does not work in major apps like Netflix, Amazon Instant Video, and YouTube.

Comparison and Competition
Most of the big-name TV manufacturers have revamped their smart TV platforms lately, building them around more open operating systems. Sony has switched to Android TV, which has fewer of the marquee apps at this stage but includes Google Cast technology that makes it very easy to incorporate compatible apps on mobile devices. LG has switched to webOS; the interface is similar to Samsung’s, but I have not a chance to dig deeper in a review. Panasonic is using the Firefox OS, and you can get my impressions about it in our review of the TC-60CX800U TV.

Conclusion
Samsung’s goal with the new Tizen-based Smart Hub was to streamline and simplify, and that goal has definitely been achieved, but at the expense of some functionality. The new Smart Hub is very easy and straightforward to navigate, and most of the major media-streaming and gaming services are onboard. Plus, the system offers a lot of ways to access content from your personal media devices. However, if you liked the fully integrated On TV interface and advanced content recommendation tools that were part of the previous Smart Hub platform, you’ll be disappointed by their absence here. I’m guessing a lot of people didn’t make use of those services, so Samsung decided to press forward without them. Overall, Smart Hub 2015 should deliver exactly what the smart-TV owner wants: faster, simpler access to the hottest media and gaming apps.