Like many of you, I'm sure, I find myself in a weird sort of home theater limbo, a nebulous plane of existence where my main home theater system isn't housed in a dedicated room but rather a multi-purpose living space.... 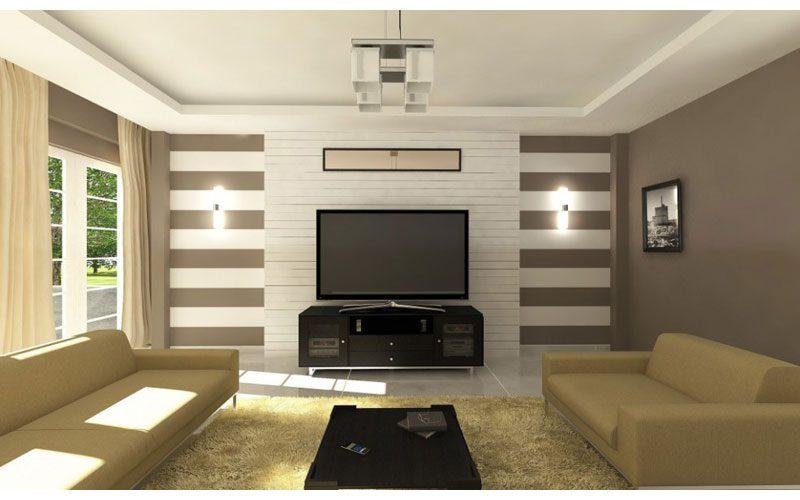 Like many of you, I'm sure, I find myself in a weird sort of home theater limbo, a nebulous plane of existence where my main home theater system isn't housed in a dedicated room but rather a multi-purpose living space. It's the room where my family and I play board games. It's where we host guests. It's usually where we read, and most nights it's where we take our supper. Given the line of work I'm in, I can't let the system's performance take a backseat to anything else, which means that the aesthetics suffer, much to the chagrin of my significant other.

What to do, though? Most nice-looking, commercially available AV furniture is designed for the lower end of the performance scale--small bookshelf speakers at best, but more often than not a soundbar system--and the custom cabinetry that adorns many dedicated media rooms just doesn't make sense in a middle-class Montgomery, Alabama, home.

Enter Sanus with its Cadenza line of AV furniture. The line is comprised of two quite similar units: the Cadenza61 and Cadenza75. Those numbers affixed to the end refer to the overall width of the cabinet, with the former designed for TVs up to 70 inches diagonal, and the latter designed for TVs up to 80 inches. Both can handle displays up to 150 pounds.

Both the Cadenza61 and Cadenza75 feature dual 11U rack systems hidden behind doors to the left and right. That's especially handy for me, since I was transferring most of my gear from a 27U rack cabinet in the corner of the room (see the photo below, to the right), which had about 5U worth of total empty space between components to encourage a bit of airflow (and also to accommodate larger surround sound processors when the need arose). The gear that wasn't housed in my rack was tucked behind my center speaker (below, left), which wasn't the most desirable or attractive solution.

The Cadenza75 is, by contrast, gorgeous right out of the box. It has more than enough room to house all of my home theater and home automation gear in its various racks and hidden compartments, without requiring that I string wires through the open air or curl them up behind speakers and subwoofers. The unit isn't, on the other hand, completely assembled out of the box, which is mostly a result of the fact that it's pretty customizable as pre-build cabinetry goes.

When you pull it out of its shipping crate, here's what you see: a cabinet with no top, no center speaker shelf (it goes where the white paper is in the photo below), no feet, and no back. This view gives you a pretty comprehensive view of the inner workings of the Cadenza75, including its wire management openings, as well as a compartment hidden behind the center speaker that's perfectly sized to hold my Control4 EA-3 entertainment and automation controller, Lutron RadioRa 2 main lighting repeater, Ruckus wireless access point, and all of the networking cables needed to run to those components. Below that compartment there's another equally sized space that gives you all the room you need to run wires and interconnects between components installed in the two separate rack units, as well as fold up and tie any cables that are a little too long.

You'll also notice in the photo above the two square panels to the left and right of the center speaker compartment. Those are removable and allow you to install a longer (up to 73.5-inch) soundbar in the Cadenza75, if that's the route you're taking with audio. That does mean you'll need to lower the shelf in the center of each rack. It also means giving up roughly 4U of rack space on each side of the cabinet. That's probably fine if you're running a soundbar, though, since you won't need to rack an AV receiver or surround processor and amps.

But wait, I hear you saying, wouldn't extending a soundbar into the left and right cabinet block its left and right channels? Good eye. And you'd be right if solid wood were the only door options. But Sanus also includes two perforated screens with which you can replace the center panels in each door. I chose to use those screens not for acoustic reasons, but simply for additional airflow.

Not that the Cadenza75 is lacking for airflow, mind you. Tip it over on its back (see below, and this is something you have to do if you want to install the optional feet to give it a little extra clearance off the floor), and you'll notice that the cabinet has several air channels carved into the bottom--along with four bottom holes for routing power cables and speaker cables out of the unit.

Depending on your gear and where you live, those wide slits, along with those in the back panels, may be more than enough airflow to keep all of your components cool. Living in Alabama, where it's impossible to survive summertime (or most of spring and autumn) without ceiling fans, I needed all of the air circulation I could get my hands on. So I opted for Sanus' optional EcoSystem modular rack accessory power supply and two 1U fans installed at the top of each rack: one above my Anthem A5 amp, and the other above my Sunfire SRA-2700EQ subwoofer amplifier.

The neat thing about the EcoSystem is that the power supply comes with a thermostat that automatically triggers up to four rack-mounted fans inside the unit. The thermostat is marketed as being magnetic, but for some reason the one sent my way wasn't, although it was easy enough to zip-tie it to the highest point on the back of the rack above my main amp. That allows the fans to remain off when not needed, then kick on automatically once things start to get a little toasty, without any input from yours truly.

The other neat thing about the EcoSystem power supply is that it comes with one front-panel and three rear-panel USB power ports, which I'm putting to good use keeping my Sphero BB-8 and extra PlayStation 4 DualShock controllers charged.

Since the rack units in the Cadenza75 are standard 19-inch width, you can install any rack accessories from any brand that you like. Getting to the rack to bolt in hardware or move (or add) shelves will require that you remove both the doors and the doorjambs, though, and getting them back on straight is a little tricky.

Virtually every other aspect of assembling and loading the cabinet is as straightforward as can be. I decided to load up both racks and wire everything before putting on the tempered glass top, but in the end that really wasn't necessary, since the back of the Cadenza75 is comprised of three removable panels that are held in place magnetically, which makes it super easy to access all of my gear when I need to replace components for the purposes of review.

The only problem I ran into, in terms of loading the cabinet, is that by the time I installed and wired up my amp and preamp/processor, subwoofer amp, Dish Network Hopper DVR, Samsung UHD Blu-ray player, Oppo Blu-ray player, two Cisco eight-port network switches, Lutron main repeater, Ruckus WAP (wireless access point), and Control4 EA-3 processor, the four wiring ports on the bottom of the cabinet were positively packed. I'm pretty sure at this point that there isn't room for another single cable to enter or exit the cabinet from the bottom.

Perhaps the most surprising thing about the Cadenza75, at least in terms of the effect it has had on my media room, is its positive impact on audio performance. You're raising your eyebrows right now. I can see you. Seriously, though, doing away with the rack in the corner of the room and moving the gear to the center has forced me to widen my front soundstage, which my GoldenEar Triton Ones really appreciate. But more than that, the cabinet--especially the center speaker compartment--is just so thoroughly inert that the itty-bittiest bit of resonance I was hearing from my center channel before is now completely gone.

High Points
• The Sanus Cadenza75 is a wonderfully well-built AV cabinet aimed squarely at the sizeable but underserved demographic of home theater aficionados who have high-performance systems in multi-purpose rooms.
• The fact that it comes mostly assembled is a huge benefit. The fact that the unassembled bits represent a surprising amount of customizability puts this cabinet in a class of its own.
• Niceties like slow-close hinges and drawer runner hardware also elevate the elegance of the cabinet immensely, and they keep you from slamming doors after popping in a movie or CD.
• Reliance on dual 11U rack units instead of simple shelving makes a huge difference. Not only can you pack the cabinet with beefy gear more efficiently, but it's much easier to cool, especially with the addition of the company's EcoSystem rack accessory line.

Low Points
• While the center speaker compartment is plenty deep and wide enough for a wide variety of high-performance center speakers, its 8.1-inch height does rule out some popular tweeter-over-mid options, like Paradigm's Studio CC-590, Focal's Sopra Center, and B&W's HTM61 S2.
• Although the wiring channels built into the cabinet are plentiful, slightly larger holes on the bottom of the cabinet, as well as channels between the top and bottom compartments 'round back of the unit, would help. It would also be nice to be able to run wires into the drawers beneath the center speaker compartment.

Comparison & Competition
If what you're looking for is a cabinet that can accommodate an entire high-performance home theater's worth of gear, a beefy center speaker, and a sizeable TV, with more-than-adequate cooling and more than a few options in terms of customization, Sanus' Cadenza75 doesn't have much competition. I've searched high and low for such an option and came up mostly short. With its Modular Synergy System, Salamander Designs gives you the ability to build something quite close to the Cadenza75, with extra goodies like lockable doors and pull-out rack cartridges. Even if you simply copied the Cadenza75 as closely as possible, you'd still end up paying quite a bit more for the Salamander unit. The only other viable option I can think of is completely custom cabinetry, which could easily cost tens of thousands of dollars.

Conclusion
For $1,809.99, the Cadenza75 isn't merely an exceptional home theater cabinet, it's also a tremendous value. The difference it has made in the aesthetics of my media room can't be overstated. That twinge of embarrassment I've always felt when guests come over for something other than movie night, and the lights come up to full brightness, is gone for good. My wife, who has always tolerated my home theater habit half-begrudgingly (at least during those times when we aren't watching a movie), positively beams every time she walks into the room now. And on top of all that, my reference home theater system actually sounds better. What more could one ask for?

You'll automatically be entered in the HTR Sweepstakes, and get the hottest audio deals directly in your inbox.
Author
Dennis Burger
HomeTheaterReview Product Rating
Value:
Performance:
Overall Rating:
When you buy through links on our site, we may earn an affiliate commission. Your support is greatly appreciated!
This is the static ad content. This is just a placeholder for now to get things styled.
Visit Website