Bookshelf speakers more often than not require a stand to be part of your system. It's important decision that can have an effect on the quality of your sound. Andrew Robinson takes a look at the SF26 option from Sanus. 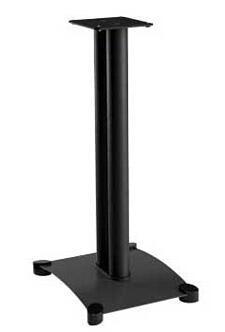 Like HDTV mounts there is a plethora of bookshelf and center channel speaker stands, so it should come as no surprise that one of the industry's largest manufacturers of mounts would also offer a variety of speaker stands as well. The company in question of course is Sanus and the speaker stand I'll be reviewing is their SF26.

The SF26 retails for $169.99 a pair and belongs to Sanus' Foundation Steel Series lineup of speaker stands. The Foundation Steel Series consists of six unique options, two of which are designed to work exclusively with center channel loudspeakers. The Foundation Steel Series is Sanus's next to top of the line product line, resting just below their Ultimate Series, though I'd hardly call the SF26 second tier. The SF26 is constructed from heavy gauge steel and is finished in a semi-smooth black textured finish that gives the dual pillar stand a very tailored look. I say tailored because regardless of what speaker I placed atop its rather large top-plate the pairing appeared deliberate, by which I mean the SF26 never felt like a third party product. The SF26 itself measures 26-inches tall by 11.75 inches wide and 14.75 inches deep. Each stand, without sand or lead shot, weighs a sturdy 17 pounds apiece. The top plate (the plate your speakers will rest upon) measures six by six and a half inches and is capable of holding speakers up to 35 pounds. The base plate is fitted with rubber feet that can accept feet suited for wood floors as well as carpet piercing spikes, both of which are included with the SF26's purchase price. Sanus includes both brass and neoprene pads to aid in decoupling your bookshelf speakers from the stand itself. Also, there is an integrated wire path to help with proper cable management, though it's aimed at less hefty speaker wire.

Building a pair of SF26 speaker stands is an easy enough task for a single person though I'm not sure it can be completed without following the included instructions. I'm not trying to suggest that the construction is complicated; just one I don't suggest 'winging' without consulting the manual for a brief look-see. I was able to build both SF26 stands in under a half an hour using the supplied tools. Once assembled I settled on the included brass spikes to decouple my Episode 900 Series loudspeakers from the stand itself before placing my speakers atop the SF26's top plate. I did not add any additional mass to the SF26's pillars but did use a pair of Velcro cable straps to attach my reference speaker cable to the rear steel support, since they were too large to fit within the SF26's included cable channel. Once setup and in place the SF26 proved to be a stable platform for the large Episode 900 bookshelf speakers -even my Irish Wolfhound's unruly tail was of little consequence to the SF26.

Read about the high points and low points of the SF 26 speaker stand on Page 2. 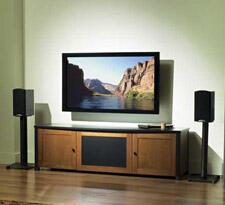 High Points
• The SF26 speaker stands from Sanus manage to
look like factory original stands in that they compliment a wide range
of bookshelf loudspeakers, big and small, which is all you can ask from a
third party stand.
• The SF26 is an ideal match for many large
bookshelf speakers in that it places many tweeters and/or midrange
drivers at ear level.
• The SF26 is ideal for left and right mains
as well as rear channels though for center channel speakers I'd
recommend either the SFC 18 or 22, which mate well with the SF26 and the
rest of the Foundation Steel Series.
• For those who prefer more mass the SF26 will allow you to add more weight by way of sand or shot.

Low Points
•
The included cable routing channel isn't really designed for many of
today's higher-end cables, cable such as my Transparent speaker cable.
•
The rubber feet that accept either hard wood floor stoppers and/or the
carpet piercing spikes are not the most intuitive items to attach to the
base during the first steps of assembly.

Competition and Comparisons
Like
I said earlier virtually every mount manufacturer makes and/or offers a
line of speaker stands. A few other companies to consider in this arena
are OmniMount, Solid Steel and Mapleshade. For more on these stands as well as others please check out Home
Theater Review's AV Racks and Furniture page.

Conclusion
For
just under $170 a pair the SF26 speaker stands from Sanus are difficult
if not near impossible to fault. They look great, provide a sturdy and
reliable surface with which to place your beloved bookshelf speakers and
don't cost a fortune. While you can spend more and get something a bit
more robust from Sanus' own Ultimate Series, for me the Steel Series and
the FS26 is all the stand I require. Highly recommended.