One of the difficult things about owning a projector is mounting it, especially because almost every projector mounts differently. But Andrew Robinson found the Sanus VMPR1 universal projector mount to really live up to its name. 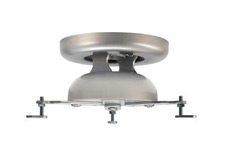 Front projectors are a wonderful way to affordably obtain a larger-than-life image in your theater, the downside being that there never seems to be a shortage of accessories required to enjoy said image. Front projectors require screens, which, depending on your room, could mean spending a little bit more or a lot more money. Projectors often need long runs of HDMI cables, which like screens, seem to grow exponentially in price with every foot. And last but not least they often require some sort of mount. The problem is no two projectors are alike and while there may be a plethora of HDTV mounts available on the market today, there aren't many front projection mounts. One of the best universal front projection mounts available today is the Sanus VMPR1 Tilt and Swivel Projector Mount. How do I know it's one of the best? Well, as a reviewer I review a lot of projectors and the VMPR1 has been my mount of choice for well over five years.

The VMPR1 retails for $149.99 and is capable of securely suspending front projectors weighing up to 50 pounds from your ceiling. The VMPR1 features independent roll, yaw and pitch which are critical when aligning any front projection system. The VMPR1 provides for 30 degrees of tilt, 15 degrees of swivel and six degrees of roll, all of which can be adjusted via a simple Phillips head screwdriver. The VMPR1's legs are fully adjustable and allow them to fit virtually any projector's mounting points. I've used the VMPR1 on Sony, Panasonic, Samsung, Sanyo and Anthem (JVC) projectors without incident. Sanus claims the VMPR1 is compatible with 95 percent of all LCD or DLP-based projectors available today - I would have to agree for I've only encountered one projector, in the SIM2 Mico50, where I couldn't use the VMPR1. The VMPR1 in its flush mount configuration sits four and three quarter inches tall or will suspend your projector four and three quarter inches off your ceiling. If you need more "drop," Sanus provides a seven-inch extension pipe, which does come in handy for projectors with less lens shift capabilities - remember keystone adjustments are the enemy.

In terms of use the VMPR1 is easy come, easy go and performs as advertised. Its plastic covers go a long way in dressing up its otherwise "spidery" appearance and help with cable management too. My personal VMPR1 is finished in a silvery grey, which when placed close to a white ceiling makes it appear more or less white in overall color but black is also available and most likely the preferred color since most projectors are black. I purchased my VMPR1 some time ago to accompany my then brand new Sony "Pearl" projector for which silver was appropriate. Mounting any projector is a job best done by two people but making the requisite alignment adjustments on the VMPR1 is a decidedly solo affair, which is nice, for anyone who's ever installed a front projector will tell you, the devil is in the details. Thankfully, getting those details right is hugely simplified with the VMPR1.

Read about the high points and low points of the VMPR1 projector mount on Page 2. High Points
• The Sanus VMPR1's build quality is wonderfully
robust but also stylish at the same time, though a large part of the
VMPR1's style is derived from its two plastic caps, which cover up a lot
of nuts and bolts and streamline things quite a bit.
• The VMPR1 functionality is second to none, working with a wide variety of projectors.
• The VMPR1's 50-pound weight capacity is fantastic and while it may seem like overkill, it affords you peace of mind.
•
The included seven inch extension pipe is a welcomed add-on in the
VMPR1's arsenal, for some projectors will require additional drop. Other
manufacturers charge extra for extension pipes where as the VMPR1 ships
with on included.

Low Points
• It's true that the VMPR1 will
accommodate most any projector but if you own a large projector from
the likes of Sim2, Digital Projection or Runco you may need to look
elsewhere.
• It can become mildly frustrating adjusting each of the
VMPR1's independent alignment controls, for while they are independent
of each other in terms of their control they still affect one another in
terms of your projector's overall alignment. But once you've done it -
you're done.

Competition and Comparison
One of the VMPR1's
main competitors has to be OmniMount and their line of universal
projector mounts.
All are comparable in price and in reported functionality, though I
can't speak to the OmniMount products beyond that for I have not
personally used and/or owned them. Another brand to consider would have
to be Chief and their lineup of universal projector mounts.

Conclusion
For
just under $150 retail you really can't go wrong with the VMPR1
universal front projector mount from Sanus. It's simple to use, easy to
live with and works with virtually every LCD or DLP-based projector
worth buying today. It's rare to find a product that has little to no
faults but the VMPR1 is such a product, which is why I bought it and
have relied on it for years.